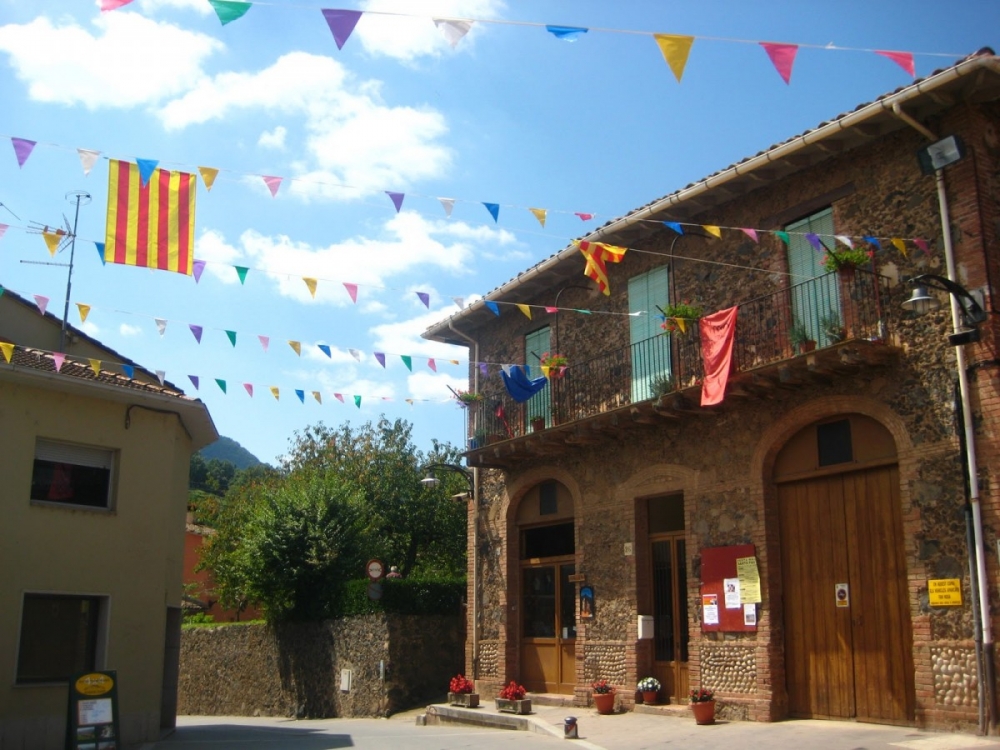 Olot: Spain has VOLCANOES??
(Yes! Real, actual, ginormous volcanoes!)
Olot is a little village in the province of Girona (to the north of Barcelona). It’s tucked between the Fluvia river and the Pyrenees, so it’s got gorgeous scenery wherever you look.
You’ll find Olot in La Garrotxa region, which is known for its volcanoes! In something like a 7-kilometer radius, there are 42 volcanoes. They aren’t active, so you can go hiking up them. I myself can now say I’ve eaten breakfast in a volcano! It’s a great place to go for outdoorsy activities and for experiencing a Catalan poble in a relaxed, beautiful environment.
How to get there:
From Barcelona, take the Garrotxa Expres, which leaves from the corner of Pau Clarís and Consell de Cent (nearest metro stops: Girona L4 or Passeig de Gràcia L3). Fares are about €15 one way, and it takes 2 1/2  – 3 hours to get there. You can drive too, but I don’t have a car! There is no train service.
What to do:

Obviously, go to the volcanoes! There’s one that’s right at the edge of the town that I didn’t go to, but is supposed to give you a good view of the landscape. There are bigger ones outside of the town that you can get to by walking or hitchhiking (we walked, but everyone in the tourism office assured us hitchhiking was totally safe there). The signposts have distances in kilometers and walking times.
You can also go to La Fageda d’en Jordànature reserve, which has trees that only exist there that were formed by the volcanoes. There are lots of walks to go on of different difficulty levels, so you can choose what you want to do.

Walk from pretty village to pretty village to take in the breathtaking landscape – it also gives you a great feel for how relaxed and tranquil the places are. You can also walk along the river, which is beautiful too.
Where to eat:
Check out the pretty, tree lined street outside the church. This sounds vague, but I promise there is only one church. The street is called Passeig d’en Blay, and it’s lined with cool modernist buildings and trees. There is an outdoor market on the street on Sundays that was selling amazing-smelling roasted chickens for lunches when we arrived. It’s also open on some holidays. The middle of the street is only for pedestrians, and there are lots of restaurants with outdoor seating that serve traditional Spanish food.

If you’re coming back into the town after a long day of hiking, just eat at whatever place you arrive at first that’s reasonably priced – it’ll taste great, no matter what it is! Order a bottle of cava to, uh, rehydrate.
Where to stay:
This is tricky for budget travelers, as there are no super cheap hostels. The cheapest we found for August was around €50 a night – not exactly inexpensive! So instead, we went CouchSurfing and stayed with a really chill Portuguese girl. Her roommate and his girlfriend also joined in, and they’re both natives from Olot (Olot-ians? I don’t know.) They went wayyy out of their way to make our stay awesome and gave us tons of tips and advice. Our hosts even went so far as to drop us off at the volcano base in the morning. This saved us 3 hours of walking and made sure we could see another pretty town, Santa Pau. This isn’t for everyone, but I loved it!
Strange things to see:
We came across a few pro-fascist statements in graffiti, and even a monument to fascists who had been killed by the Spanish Republicans, who are generally considered by history to be the ‘good guys’. I’ve never been anywhere else where I’ve seen such a quantity of pro-fascism. However, having said this, I did not meet any people from the town who expressed views, so it seems as though it may be a minority movement (I hope).

Anything else to keep in mind?
Don’t forget bug repellent! I got eaten alive by the special Catalan tiger mosquitos. They are special because they are extra vicious, and will keep you up all night to leave you exhausted in the morning when you have lots of hiking planned. On that note, comfortable walking shoes and a water bottle are also good things to have.
The people speak with heavy Catalan accents, and most menus and informational leaflets are primarily in Catalan (but you can survive with Castilian Spanish). I went to a restaurant with a foreign waiter who only spoke Catalan, not a word of Spanish. At least take a moltes gràcies with you to be polite.
Would I go again? Yes! It was very, very pretty and I loved seeing the little villages. I hope next time I go back there will be fewer mosquitos and earaches involved, and more volcanoes!