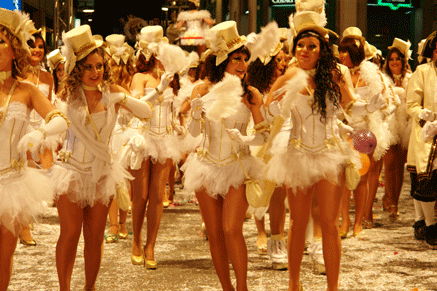 This past week, Spain’s been celebrating Carnaval, a week-long excuse for parties, costumes, and excess. I’ve never celebrated it before, but I totally enjoyed it!

I first realized there was something going on when I saw some teenagers dressed as babies in the street. But they were sitting outside the hospital looking exhausted, so my first thought was they’d been to a rave, taken some bad drugs, and were about to go home after a night in Urgencias.

Then I saw the 5-year-olds in costume and reevaluated things.

Probably not coming off a massive drug binge. Although the original picture was called “Drugging Children”, so you never know.

All week, I saw a few people dressed up (mostly kids). At the weekend, there were lots of people in full-on costume. The giant penguin and banana suits were pretty popular! At one bar, I saw a costume contest. The winner was dressed up as a Cuban doctor, wearing a giant afro wig and in blackface. Apparently it was a joke, but I didn’t get it; it just seemed offensive to me.

I also saw a group of Spanish people dressed as the Amish, which really weirded me out – the Amish are such an American thing!

But the real party happened on Tuesday the 21st. Carnaval is pretty big in Catalonia, and Sitges is supposed to be the best party in Catalonia. It’s a beautiful beach town about half an hour away from Barcelona that’s also known as “the gay Ibiza” – so pretty ideal for big street parties and people watching!

I really wasn’t sure what to wear, because somebody told me they dressed up in scary costumes (this turned out not to be true). Also, I’d seen what they do for Halloween in Spain, so I thought maybe it would be similar. So I just bought a €2.50 Venetian-style mask and wore that. When I got to Sitges, I wished I’d planned a crazier costume – I love costumes!

Anyway, we got there around 8:30, and the parties were just starting. The street was full of debris from earlier parades, and the live music was just starting. Thousands of people were drinking and dancing in the streets, which always gets way more raucous when costumes are involved.

Then there was a parade along the beach boardwalk, called the Rua de l’Extermini (Catalan for Extermination Parade – funny name, and totally appropriate). There were a bunch of floats that all had different themes.

Some of them were like the Brazilian Carnaval, with lots of girls in tiny outfits and giant feathers or wings. Others had special themes – there was an Avatar float, and another one with people dressed up like chickens. We even saw a group of people dressed up as lords and ladies…with birdcages on their heads.

The music and energy were totally incredible – everyone was there to just 100% enjoy the night and the chaos. When the parade eventually ended, everyone spilled out into the narrow cobbled streets and the beaches, and all the bars were packed full. The bouncers asked everyone who wanted to go into a bar if they were only going in to use the bathroom, and if they were, turned them away. (I lied and said no, oops!)

The party’s just getting started around 1 a.m.

The cobblestones were covered in confetti and glitter and beer cans, and the streets were crammed full of party people in crazy outfits. The beach was full of pretty drunk people rolling around in the sand and debating going swimming…and a few really drunk ones actually doing it!

At around 1:30 a.m. we headed back to the train station because most of my friends had to work in the morning. On the way out, we ran into a parade of partiers and were pretty much forced to stop at one last bar. I wish we’d been able to go clubbing too, because I bet the parties were incredible!

(Note: don’t think the Spanish are so crazy that all Tuesday nights have such huge potential for partying. No, Mondays are much better.)

We eventually made it to the station, which was crazy crowded of course, so I managed to lose some of my group and spent the ride on the sitting on the floor seriously regretting the last round of shots.

When I got up for work in the morning, my face was totally covered in glitter…which, if you don’t know, is pretty hard to get off. Apparently the next they had a weird funeral rite for a sardine,complete with women dressed as weeping widows, to mark the end of the partying. I was too worn out to go, but I kind of wish I had. Still, I wouldn’t have missed seeing the street party for the world. And there’s always next year.

Here’s a video of the parade to get an idea for what went down for a week in Sitges:

All in all, it was a great way to celebrate my first Carnaval!

More about Carnaval in Spain:

Currently reading: The Shadow of the Wind by Carlos Ruiz Zafón. I have the Spanish-language version too, but I’m too intimidated to start it!