Catalan: The Weirdest Language Class I’ve Ever Been To 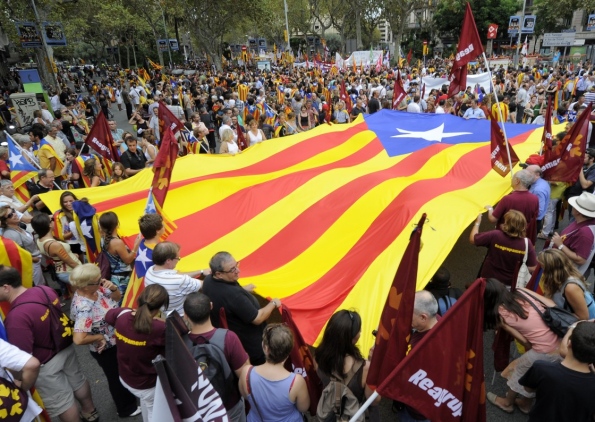 Catalan is that other language they speak here in Barcelona. It’s sometimes mistakenly called a dialect, though it’s officially recognized as an official language by the Spanish government (along with the Basque Country’s Euskara and Galician). If you’re not familiar with Catalan, it might sound like you’re hearing  Spanish but not understanding anything. But it is its own unique language.  I just started officially learning it and it’s a really bizarre experience.

The blue estelada, a version of the independist flag of Catalonia or the Catalan Countries. (Photo credit: Wikipedia)

It’s something I’ve wanted to do pretty much since I got here but had so many changes in my schedule it was impossible to get a time pinned down. Now that’s sorted out, I went down to the Center for Linguistic Normalization and signed up for the cursos gratuitos (free classes) offered by the local government.

The classes are pretty easy and low-key, especially compared to my college classes. I haven’t taken a class with ‘normal’ people in years! By ‘normal’, I mean people who aren’t necessarily super academically oriented or interested in classroom learning. It was almost like being back in high school in a way – I was trying to balance wanting to make friends with wanting to pay attention!

There are no grades and no exams in the class (everyone grinned when la profe said that).  People range from their early 20s to their 60s and come from mostly Europe and Colombia. Just about everyone has to learn Catalan for work, although I’m doing it for fun and to understand the culture better.

Now, here’s the weird thing about my Catalan course. It’s a beginning language class, but everyone understands almost everything. This is seriously strange. I taught beginners’ English, and the students didn’t understand most what I said.  In my first Spanish classes in Sevilla, I sometimes left class nearly in tears of frustration.

Structurally, Catalan isn’t that different from Spanish, especially at such a low level. Lots of the words are even the same, so as I speak good Spanish I understand about 90% of Catalan.

But I can only say a few simple sentences. My brain gets completely confident and thinks “I understand Catalan without even studying it – I am obviously a language GENIUS!” My brain also thinks this when it reads Portuguese, and in both cases is quickly corrected.

Lots of people think I’m wasting my time learning Catalan because I don’t need it at work, my friends all speak Spanish, and it’s useless. I disagree. Not that’s it’s useless, because on a worldwide scale it is pretty useless (even strong supporters of Catalan independence will admit to this). But the instant you express interest in the language to a Catalan, their faces light up. “Oh, you’re learning MY language!” a girl once told me delightedly. My local friends were so pleased I’d started Catalan that they immediately taught me some vulgar expressions to take to class.

They say the Catalans are more ‘closed’ than the rest of the Spanish, and part of that definitely stems from the language difference even though they all speak Spanish (except for a few people in really tiny villages). But it’s not a language so much as a mark of respect, especially as they pride themselves on being different from the Spanish.

Here’s the other, positive part of the Catalan stereotype: once you’ve made friends with a Catalan, they’re your friend for life. From what I’ve seen so far, this one is true too. And if I can do something as simple as learning a bit of a language to make lifelong friends, then why wouldn’t I?

To finish, here are some examples of Catalan. This is a song in Catalan that the teacher played for us at the first class, “Ara que tinc vint anys” (“Now that I’m 20”):

And here’s a sample of Catalan versus Spanish:

Not so different, right? Oh, and before I pretend I’m a really serious language student, I must admit I skipped class yesterday in hopes of going to a festa més tard. Uuups!