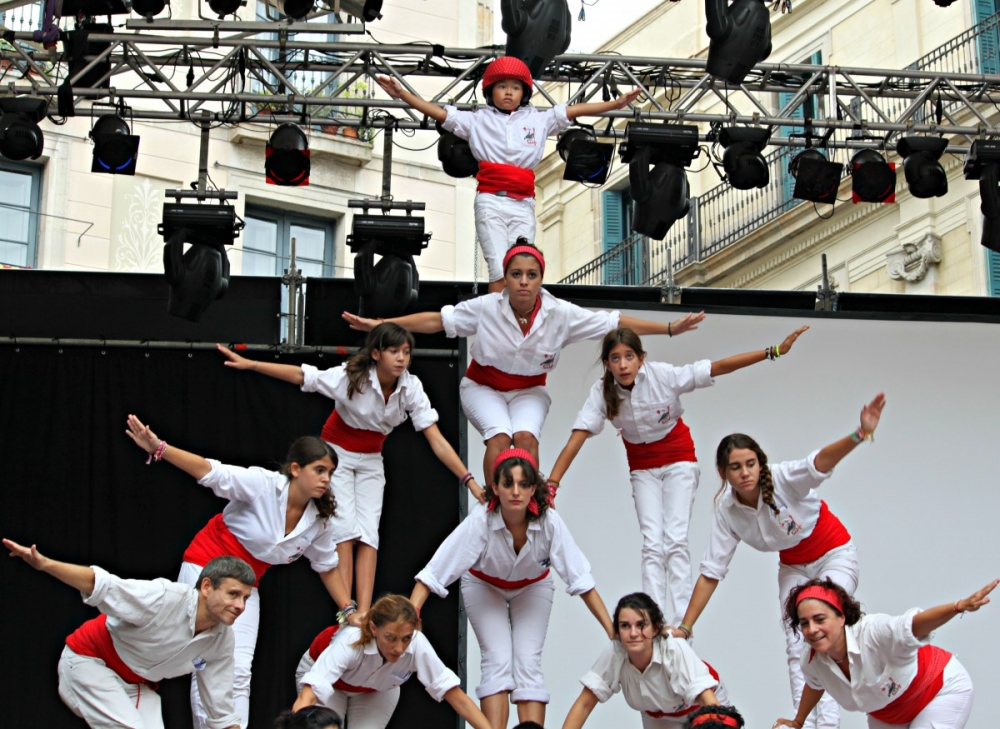 This weekend, Barcelona is putting on its big fall festival – La Mercè! The holiday was originally a Catholic feast day for Our Lady of Mercy, but it’s developed into a 3-day city party filed with free concerts, cultural activities, performances, and the city’s best  on display.

One of the most exciting activities at La Mercè is watching the castell competition. ‘Castell’ means ‘castle’ in Catalan. The castellers make human towers, and it’s a traditional Catalan activity that’s been around for ages.

Each year, the teams push to get their towers higher and higher, and although they might look calm and collected, it’s obviously a very tough activity. They go very slowly and carefully, and if you start focusing on individual castellers you can see them shaking from the effort. And it’s not surprising – the towers I saw today had up to EIGHT layers of people!

There weren’t many people my age there except for tourists, but there were lots of families with small kids and older people. It’s just not anything new for locals my age, but I was pretty impressed.

The castellers walked in in tower formation, then took the stage and started setting up the bases for their towers. Their bands started playing pipes and drums as the towers got higher and higher and higher.

As you can see, the biggest and strongest go on the bottom, and then the castellers get smaller and lighter as they go up. The very top of the tower is always a small child. The littlest ones I saw today were probably around 5 years old. (Would you let your five-year-old claw their way to the top of an eight-level human pyramid??).

The first group up was the team from Vilanova i Geltru (the blue team). Everyone was biting their nails as they did some amazingly complex formations.

And then the crowd had a collective sharp intake of breath – a tower collapsed and one of those tiny 5-year-olds went flying face-first into the stage. One of the men on the bottom had injured himself, and he fell down writhing in pain. Everyone turned to stare, but their teammates kept their formation while waiting to see what happened.

Luckily, everyone was fine. The child burst into tears, but was dancing around by the end of the performance. The man had to be carried off and I didn’t see what happened to him.

Fortunately, the plaza was lined with ambulances. Castells are said to be pretty safe, but of course there are injuries when you’re building huge human towers.

Next up were the Barcelona Falcons (the red team), who pulled everything off flawlessly. They managed to put together the eight-level formation, and they exploded in cheers when they finished.

The teamwork and trust it takes to build a tower like this is incredible, not to mention the strength and patience. Plus, it looks like so much fun. Today’s performances blew me away and now I’m seriously tempted to give it a go myself!

The Falcons after their incredible performance.