Asturias: How to Lose Your Voice & Make Friends Anyway 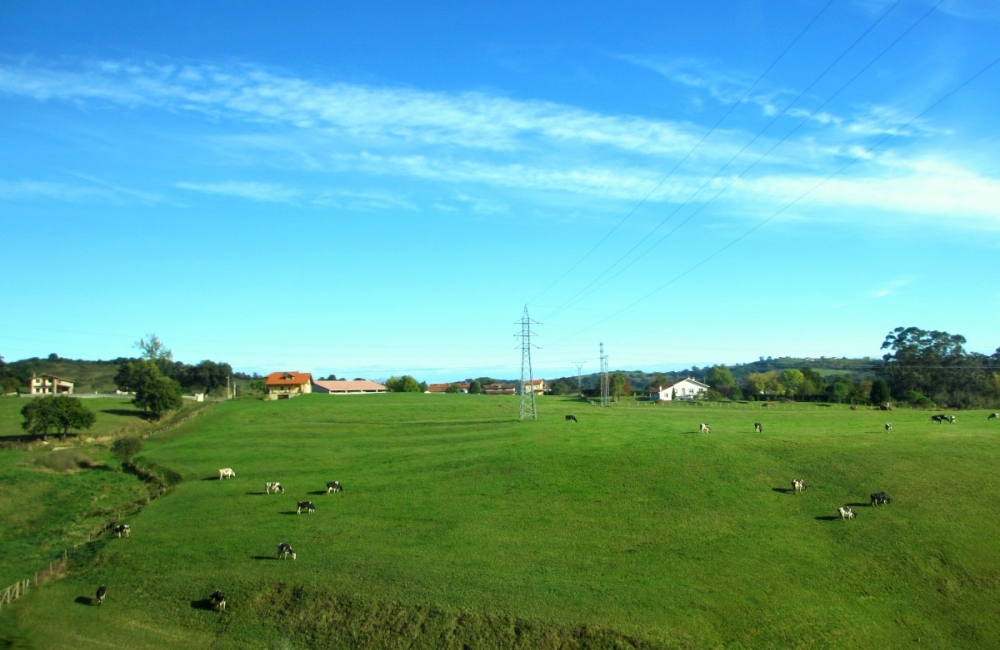 Last weekend, I went to beautiful Asturias – a stunningly green region in the northwest of Spain. The scenery was gorgeous, but I was really sick all weekend. On a trip where one of the main goals was to drink as much of the local cider as humanly possible, this proved a bit of an issue. I almost didn’t even go because I felt so awful (I think I had the flu), but in the end I just couldn’t pass up a travel opportunity.

It looked just like it does on the Leche Asturiana milk cartons!

I went on a cheap trip, and it definitely packed my weekend full of amazing sight-seeing and partying…but the price was putting up with a nearly 13 hour bus ride. I got on the bus with a hoarse voice and plans of having a nice long sleep. Instead, I ran into some friends who kindly offered me a drink, because everyone knows alcohol cures everything (not weakens your immune systems or anything).

Within two hours, the bus had turned into a moving nightclub. Some of the guys got rather over-excited, started whipping their shirts off and waving them in the air, but it quickly devolved into being soppy (“I love Robbie Williams”, one of them guiltily admitted when Robbie came on the radio).

Everyone fell asleep around 5 a.m. and I woke up in the middle of beautiful scenery around Bilbao. I was exhausted and felt terrible, but all the scenery was so amazing that I couldn’t keep my eyes away from the window. For hours, we drove along the northern Spanish coastline, which just so green! We went past everything from stunning, isolated beaches to dramatic cliffs to tiny villages to stops on the Camino de Santiago. I’ve never understood the point of road trips before, but driving through here made me almost get it.

We stopped for an early lunch in Gijón (the biggest city in Asturias), spent a few hours there, and then moved on to Oviedo (the capital). I had time for a quick shower and change of clothes, then raced off to beat a world record.

To do this, we went to Calle Gascona, which is nicknamed “The Boulevard of Cider”. The sloping street is lined with sidrerias and terraces.  There were lots of stations featuring different types of cider for a big cider-tasting.

Our hosts in Oviedo had arranged an attempt at two world records – beating the record for the greatest number of people of different nationalities singing the Asturian anthem, and the record for the greatest amount of sidra drank. We definitely broke  the singing record; whether or not the sidra record was also broken is hard to say, because we all stopped keeping track of records pretty quickly.

To count the nationalities, everybody had painted their flag on their faces, so the street was filled with a huge, mingling international crowd. The combination of the free-flowing sidra and the flags was a great icebreaker.

The Asturians have a special way of pouring sidra. It can either be done from a cask or from a hand-held bottle. Smartly-dressed waiters hold bottles of cider high above their heads in their fully outstretched arms; then, the cider somehow lands in a large glass that they hold in their opposite hand down by their hips.  Why do they pour the cider that way? So it stays bubbly! You’re supposed to have small glasses and drink them instantly before the bubbles go down.

One way of pouring Asturian cider

I was thrilled at the chance to meet so many people, and happily chatted until my voice ran out of steam. I croaked and gesticulated my way through conversations until finally, it happened – I literally couldn’t say anything.

So I gave in and went back to my hotel in the freezing cold, glad to have made new friends in spite of my voice, excited to have beaten a world record, and happily full of delicious sidra asturiana.

Apart from making new friends and indulging in sidra, I also saw some great stuff in Asturias! Check back over the next couple of weeks to read more about my trip to one of Spain’s lesser-known gems.