Oviedo: My Life is Turning Into ‘Vicky Cristina Barcelona’ 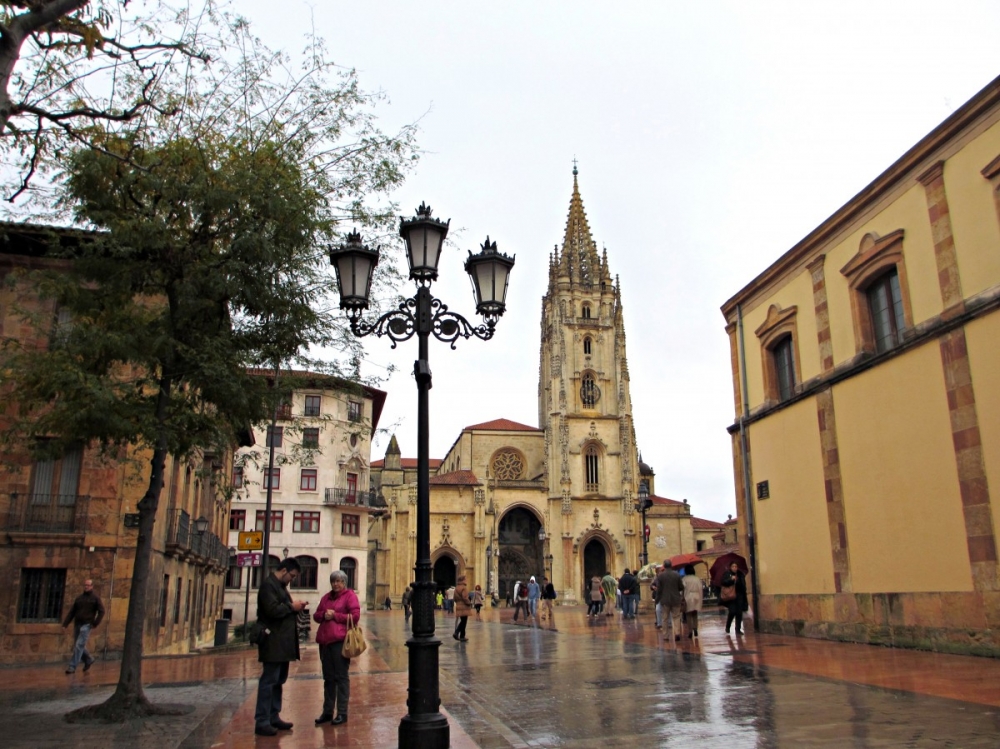 When I announced I was going to Asturias for the weekend, the first response was “Oh, just like Vicky Cristina Barcelona!” Blonde goes to Barcelona, enjoys some time in beautiful Oviedo….yep, you can just start calling me Scarlett now.*

*Minus the crazy romantic plot of the movie, thankfully.

Kidding aside, Oviedo really is just as beautiful as Woody Allen showed in the movie. It’s full of pretty squares and old buildings. By early November, the chilly autumn weather had started to turn all the leaves golden yellow.

Speaking of chilly weather, it was really cold the whole time I was there. Asturias is famous for three big things: cider, the fabada (bean stew), and the rain. Ok, it’s famous for the extremely green countryside too, but it’s only that green because it rains so much! Even when it wasn’t full-on raining, it was damp and foggy. At times I couldn’t tell if it was drizzling or just really misty, but either way I was slightly soggy all weekend.

I arrived in Oviedo on Friday night after seeing Gijón, and was whisked away to a sidra-tasting almost straight away. The next day we spent traveling around the region, so although I was technically staying in Oviedo I didn’t actually see the city until Sunday morning (unless you count discotecas as tourism).

The big tour was led by local students at the Universidad de Oviedo. It was lovely getting to see the city, but it was next to impossible to hear anything they said. I’m afraid I don’t know very much about the city’s history.

The one segment I did get to hear after jostling my way into the front of the group was about Woody Allen. He reportedly considers Oviedo to be his second home (after New York, of course) and shot lots of Vicky Cristina Barcelona there.

Interestingly, the tour leaders sounded pretty positive about the movie, whereas most of my barcelonés friends don’t like the representation of their city in it. Anyway, he got his own statue in Oviedo. One of my friends met Woody Allen while he was filming in Barcelona, and said his overwhelming impression was of somebody short, and the color grey. Based on that, I think his statue in Oviedo probably does him justice (keep in mind I’m 5’2):

I know, that was a terrible joke. Moving on…

Our hosts also showed us some of Oviedo’s nightlife. The previous evening, we were treated to a semi-formal tapas tasting at Oviedo’s Palacio de Congresos. The modern building looks nothing like the palace I had envisioned, but it was actually a great place to have a party. The white, angular outside gets lit up in changing colors at night and feels more like a chic art gallery than a traditional palace.

I got to try lots of different kinds of salty fish empanadas (Asturias is on the coast, so the fish is great), oily sidra-soaked chorizo, small squares of warm tortilla, the famously strong cabales cheese, and even sidra sangria. “Ooh, this is the best sidra I’ve had all weekend”, I said tipsily to the traditionally dressed man in charge of pouring it. “I know,” he replied with a grin, “That’s because it has more alcohol in it.”

After the tasting, we all headed to the old city center to continue the party. At night, Oviedo has a definite university-town vibe because of the big student population (about 27,000 people). The center is filled with bars and clubs, and on a busy Saturday night crowds had spilled out into the winding streets. I went to a rock bar with the menu printed on old records, and then onto the multi-story club Salsipuedes for a massive party until the wee hours.

I actually didn’t get to spend as much time as I would have liked to in Oviedo – that’s the downside of traveling on organized trips. The University of Oviedo students arranged the program, and they were so excited to share their region with visitors that they tried to cram too much sightseeing into a single weekend. They very clearly made a huge effort (and a big gracias to them for it), but I would have swapped the visit to tiny Avilés, for example, for more time in Oviedo. Pretty as Avilés is, there wasn’t much to see.

All in all, Oviedo definitely lived up to its beautiful reputation and I’m so pleased I got to see it. (Check out the slideshow below for more photos.) But….it wasn’t my favorite thing I saw in Asturias. That’s coming up in my next post about the region.

For more information about visiting Oviedo, check out this great guide from the Hitch-Hikers’ Handbook, which will tell you everything you need to know about the Asturian city.