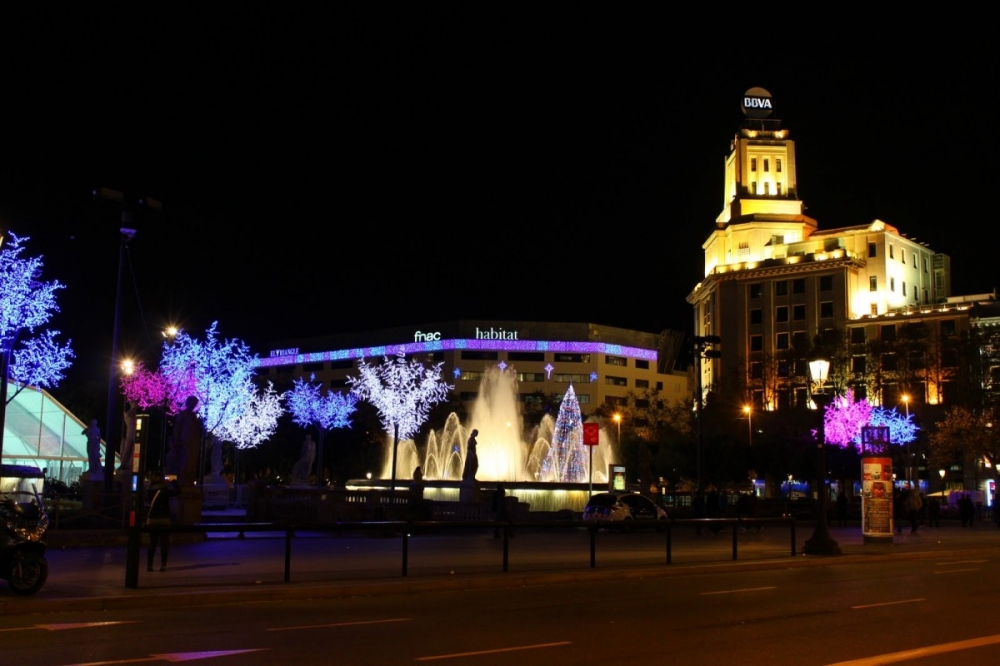 It’s officially the holiday season in Barcelona! On Thursday, they finally switched on the Christmas lights that they’ve been slowly putting up all month. I’ve been excitedly waiting for them to turn them on for weeks now, and I was so happy to wake up from my siesta to a purple glow coming from my window.

With the festive mood in the city, there are suddenly tons of social things to do. I haven’t been especially active on my blog this week because I’ve spent most of my waking hours at something social or getting ready for something social! Here’s what’s been happening in my life.

The night they switched the lights on, the city also organized the special Barcelona Shopping Night, where all the stores on Passeig de Gràcia stay open until 1 a.m. All the shops had something special, whether it’s a DJ booth, cocktail bar, makeup stand, pop-up hair salon, glasses of cava, or all the above! Of course, practically the whole city was crammed into the main shopping street, so I didn’t do any actual shopping, but there was an amazing buzz in the air.

Some of the lights in the busy city center for Shopping Night Barcelona.

I also celebrated Thanksgiving, of course! Celebrating your country’s traditions is always different abroad, and I mean that in a good way. It’s so much fun sharing a nice holiday, especially one like Thanksgiving that is pretty low-pressure and just about enjoying some good food with people you like.

On the actual day, I went out to one of my favorite restaurants for a tapas dinner with a group of friends. We didn’t mean to do it on Thanksgiving, but we cheersed to the holiday anyway. Chorizo al vino is pretty different from roast turkey, but just as delicious!

This weekend, I had a real Thanksgiving party in my flat with my five roommates and a bunch of friends from all around the world. We ended up with people from the U.S., Spain, Germany, France, Turkey, Andorra, South Korea and Italy. I cooked for SIXTEEN people. Check out my oven full of roasting chickens:

The dinner was a huge success! I’m not a great cook, but the food came out really well and all my friends liked celebrating Thanksgiving. Actually, one of my roommates took to it so much that he refused to serve people food unless they said one thing they were thankful for!

By the way, a big thank you to Kaley of Y Mucho Más for sending me an awesome stuffing recipe! It was seriously tasty.

After our American-style celebration, the dinner turned into a full-on party with even more guests. We added a toque español and headed out to the clubs until six in the morning. That means today has been a typical post-Thanksgiving day full of leftovers and laziness. I’m thankful I had so many great people to celebrate with.

The dinner…before even more people came for the party!

On top of my busy holiday celebrations, one of my roommates is leaving Barcelona in a couple weeks. We’ve lived together since I moved to Barcelona in June of last year, and he’s one of my best friends here. Of course, he has to go out with a bang, so there’s an endless cycle of trips to his favorite clubs, bars, and restaurants.

My street all lit up!

Tomorrow is the first day I’ll be taking ‘off’ from late nights since last Monday. I’m exhausted and could really use a long sleep, plus my feet need a rest from the high heels I’ve been stomping around in. Still, it’s a nice problem to have, and I finally feel like I’m really taking advantage of the city.

In slightly related news, it was my five-year high school reunion this weekend. Obviously I didn’t go, being in Spain and all, and I don’t feel like I missed out at all. I think that’s exactly how you should feel about reunions.

I hope everybody enjoyed their Thanksgiving and weekends as much as I did!