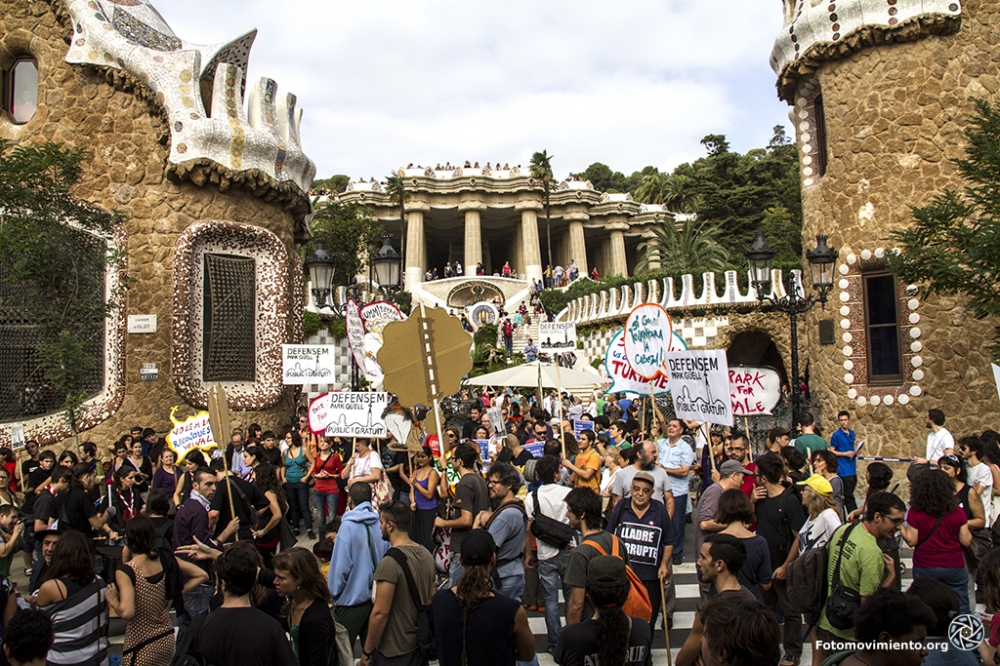 This week is a sad one in Barcelona for Gaudí fans. Yep, the day has arrived that you will now have to pay entrance to his fabulous Parc Güell. The city has been threatening to make people pay to enter the whimsical park for, well, a while now. And on October 25th, the fateful Parc Güell fees finally arrived.

The barceloneses littered the streets with pamphlets declaring their right to use the city parks freely. The Gràcia neighborhood in particular was plastered in little pieces of white paper with the silhouette of famous Barcelona buildings and “Defensem el Parc Güell” (Defend Parc Güell) splashed across the top in bold, black letters. There protests staged at the iconic park entrance, with angry locals waving anti-fees signs on the famous mosaic-lined staircase.

OK, I am being a bit dramatic. But it is true that now you’ve got to pay for entrance to the previously free park. By Gaudí standards it’s practically a bargain – it costs €8 (€7 if you buy them online before) compared to the €16.50 for La Pedrera, for instance.  OK, it’s a pretty special park with truly unique buildings….but having to pay for a previously free park is kind of annoying. And €8 for a park?? (Not that I go often, but it’s still nice to know that I could go for free).

Apart from my personal complaints about having to pay (mostly because I am cheap), there’s been a big debate raging about the entry fees. Here’s a little bit about what’s been going on.

The upsides of the change? Well, the money will go to preserving the structure of the “Monumental Zone”. They will also limit the number of visitors in the park at once (400 every half hour), which could be nice, as the park can get pretty packed in the summer months (the city says up to 3,000 people enter the park every hour at its busiest). The official park site says:

“The regulation of entrance to the Monumental Zone of Park Güell begins with the priority objective of ensuring that local people have the right to use it as a leisure area. This regulation brings an improvement in the quality of life of the residents and at the same time offers a better experience to millions of visitors, who find a higher quality experience and a more accessible setting.”

The park definitely gets crowded. Here’s a picture my parents snapped when they were here in September, which is just past the peak summer season, but still incredibly busy:

On the other side of the argument, the “Defensem el Parc Güell” group has taken a strong stance against the fees, with over 52,000 signatures on a Change.org petition to the mayor of Barcelona to stop the fees. Here’s the English version of their petition:

“Those of us at the “Plataforma Defensem el Park Güell” want an open park and we oppose any type of restrictions and privatization of one of the most vibrant areas in the north of Barcelona. Please collaborate with us by signing. Help us to stop the Park Güell from being privatized.”

They say that the entry fee is “economic exploitation of the park”, rather than a way to conserve it, and suggest using money from tourism taxes to fund the conservation efforts instead, along with having visiting shifts for tour buses.

However, the new Parc Güell fees don’t mean that Barcelona residents always have to pay for the park. Residents in some of the nearby neighborhoods can get in for free at any time. There’s also a way Barcelona residents can register to enter a raffle for a certain number of free tickets every hour. However, a poll on La Vanguardia’s website of over 1,000 people shows that 79% of people think it’s too tedious to be a real workable system to visit the park, so people still aren’t happy with the alternate plan.

Looking at what the “Monumental Zone”  consists of, most of the park is still accessible for free. Of course, the 7.9% of the park that’s now restricted is the most interesting bit of the park. Still, that area is quite small, and apart from my personal complaints about paying, I’m not sure the €8 price tag is worth that tiny bit, as lovely as it is.

Still, because the park is so unusual, I don’t think the new fee will exactly  be stemming the flow of tourists into Gaudí’s park. So, we’ll see where this ends up going. Either way, it looks like the debate will continue for a while.

I’m curious what you think – do you think the Parc Güell fees are a good idea? Would you pay €8 to go into the park?