5 Things to Know About Partying for Carnaval in Sitges 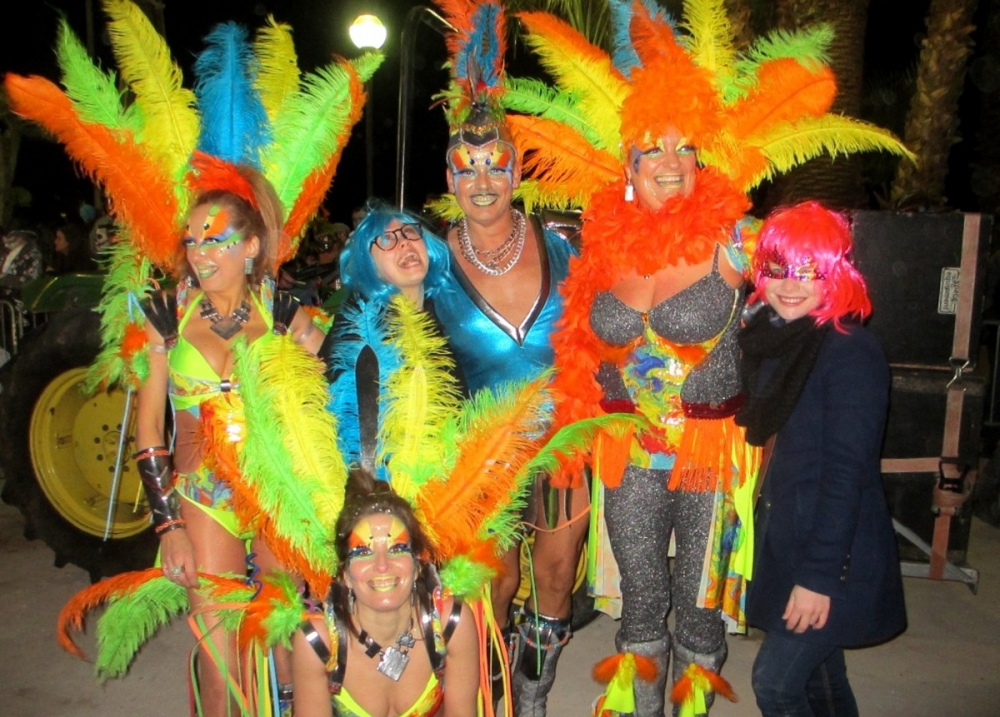 Tomorrow is officially the first day of the Carnaval festivities for 2014! This raucous festival runs for a week at the end of February. Here’s the rundown of all you need to know about this fab street party if you choose to celebrate in style on the beach in Sitges.

5) Costumes aren’t mandatory, but they do make the night a lot more fun!

People love getting all dressed up for Carnaval, from skimpy combinations of bikinis, feathers, and glitter to elaborate social and political jokes. There’s always the odd guy dressed as a banana or something bizarre as well. If you’re really struggling to find a costume, go to your local ‘chino‘ (Spain’s version of the 99¢ store with an uncomfortable name) and pick up a crazy wig and a colorful mask. Last year, we bought a pack of ten masks and made friends by handing them out.

Carnaval is the closest Spanish equivalent to American Halloween, so even though pretty Carnaval masks are obviously great fun to wear you really can dress up in whatever you want (unlike Halloween, where you’ll stick out for not wearing a scary costume). Have fun!

OK, I know there are at least two people dressed in bikinis in the picture above, but with the parade dancing right along the beach in February, it gets very, very cold in Sitges. Once you’re dancing in the middle of a revelling crowd you won’t feel the chill so much, but I assume it’s not so much fun traipsing home in your teeny tiny glittery hotpants and matching bralet. In this case, I definitely do not speak from personal experience. I am such a baby about the cold that I may as well have gone as the Michelin man in a wig last year for all the layers I stuffed under my coat.

A couple of sandwiches stuck in your bag can never hurt, especially as the night wears on. It’s a nightmare to buy anything to eat while simultaneously keeping your whole group of friends together in the middle of the party.

And by supplies I mean lots of lovely alcohol. Next!

2) Be prepared to wait a long, long time to board the train home.

Hint: this is where tips #3 and #4 will come in handy. You will want a sandwich and a coat at this point.

Last year my night came to an unexpected and unpleasant end (more on that later), and I grumpily stalked off to the train around the early hour of 3:30 a.m. More woe was coming my way when I discovered that I would have to wait in line with everyone else who wanted to go home early – which meant all the overly amorous couples. I was smushed amongst them for a very sulky 90 minutes before I could finally get on a train. In the immortal words of Liz Lemon, blergh!

The previous year I had a much better solution – I went to a bar with some friends and took shots until the crowds died down a bit.

Oh, and FYI, the train you want to catch is the R2 Barcelona-Sitges, which runs extra trips for the 1-5 of March. There are extra trips on the biggest days of the festival (Sunday, Monday, and Wednesday), with trains starting at 1:29 a.m. on some days. You can get the train at any one of the three big Barcelona stations (Estació de França, Passeig de Gràcia, or Sants). Just follow the people dressed in crazy outfits. But do double-check to make sure you haven’t accidentally followed a group of teenage goths.

Some of the trains’ only Barcelona stop may be Sants, at which point you’ll have to switch to the metro or NitBus (finding out I had to walk an hour home was the cherry on top of getting back to my flat last year).

1) Forget about the lists and party on the beach until dawn!

You can see a complete list of festivities at the official Sitges tourism site, including the sardine funeral complete with weeping widows to close the festival. There are events going on all day long in Sitges, but my favorite part is definitely the nighttime parties, when things really get going. Grab a group of friends and have a great night out celebrating the Spanish equivalent of Halloween. Only instead of a creepy haunted house, the fun takes place on  a glam, glittery costume party on the beach. And of course, because we’re in Spain, it’ll go until the sun comes up. That’s a win-win in my book!

No matter how into the festivities you are, be careful about who you ask to take your picture. Last year, a drunk guy who was supposed to take our picture not only managed to drop and destroy the lens mechanism on my little camera, but he also got a selfie of himself in the process. At least ask someone you know so that if they break your camera, you know exactly who to shake down for money later.

Have you ever celebrated Carnaval? What are you dressing up as this year?