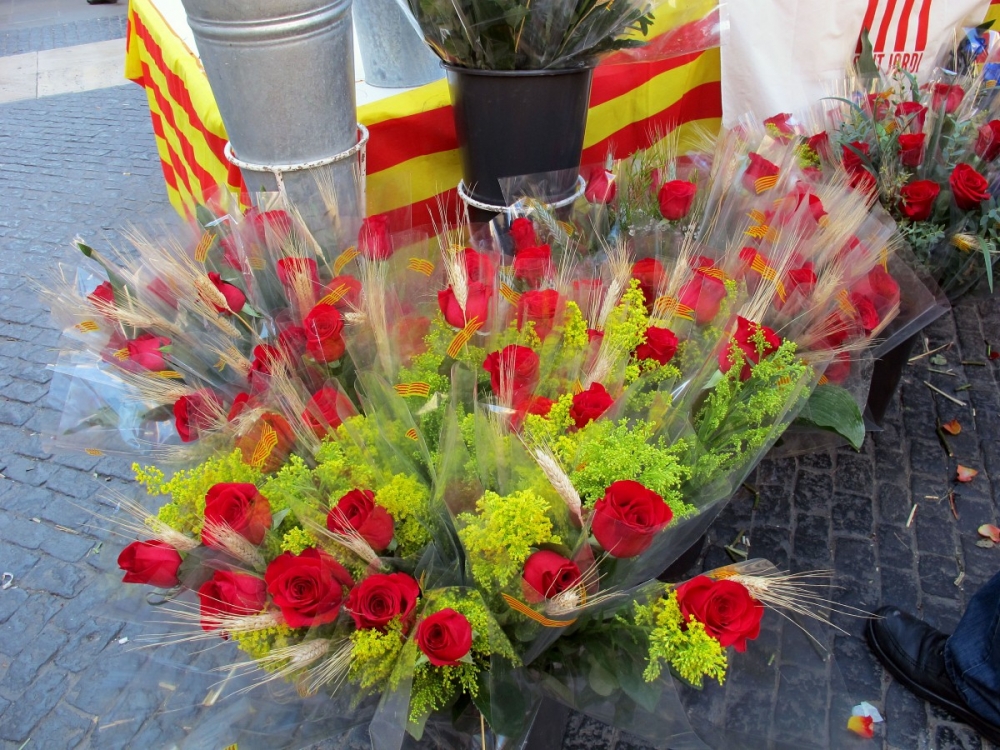 April 23rd is a big celebration here in Catalunya – the day of Sant Jordi (or Saint George, as you probably know him). But what’s the day all about?

The first year I was here, I saw the Saint George’s cross flags (a red cross on a white background) all around the city, and my first thought was that it was an English party. Oops.

Actually, Sant Jordi’s day here is very romantic. It often gets described to foreigners as something like a “Catalan Valentine’s Day”, although there are fewer chocolates involved and a lot more dragons and books. It starts with the legend of Saint George killing the dragon. According to the story, a rose sprang up from the dragon’s blood.

So where do the books come in? April 23rd is also World Book Day, and the day both Cervantes and Shakespeare allegedly died (although…I’m pretty sure that is up for debate). Traditionally, girls get roses and guys get a book, but today girls often get BOTH!

Or, in my case, I had rose-flavored ice cream and fresh-squeezed juice and called it a day, as my afternoon was leaning towards dangerously hipster.

This year, I saw something I hadn’t noticed before at the festival – a strong sense of Catalan pride. I’m sure it’s been there for a while, but this year there were quite a few fun things on display.

This political group campaigning for “A new country for a new Europe” (and, by the way, the crazy crowds):

And now, let’s move on to the Catalan flowers.

These roses have been “cultivated in Catalan countries”:

These are “freedom roses”, which reminded me of the “freedom fries” thing:

And these ones feature a subtle sticker of the Catalan stripes:

I had a great time wandering around all the displays this year. It really couldn’t have been a more perfect spring day to enjoy the beautiful Gothic quarter – with the added bonus that every so often a rose-scented breeze blew past.

Happy Sant Jordi, everyone. Would you rather get a book or a flower as a gift (I know which one I would choose!)?