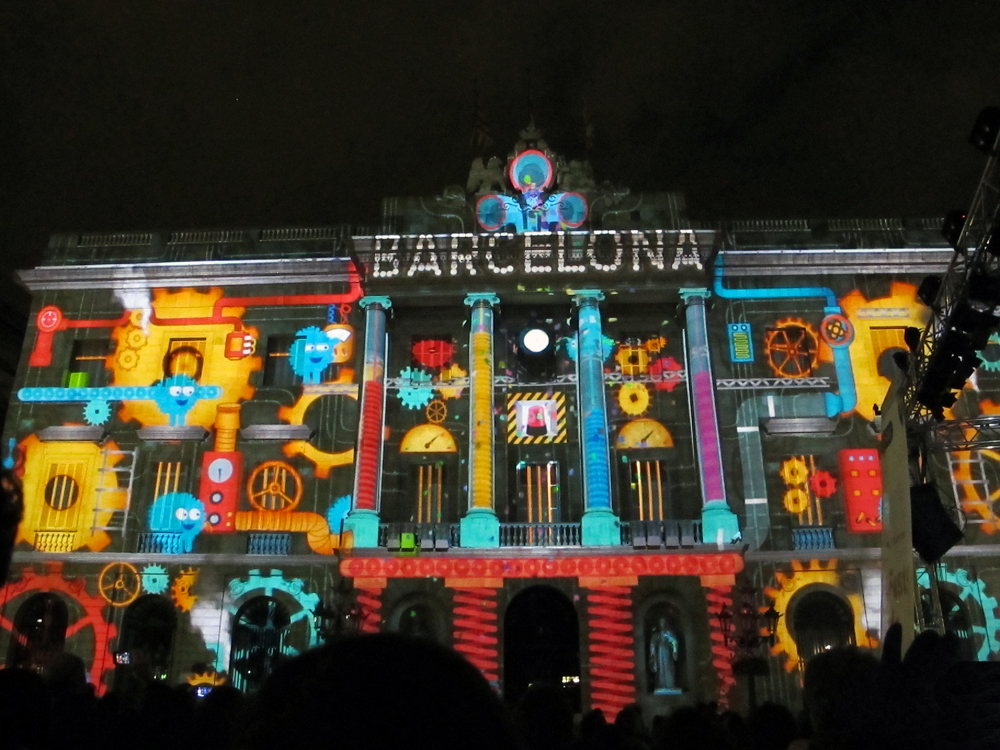 One of the major upsides to living in a big city is that you get to go to all kinds of cool festivals and events. And in February, there’s one event that’s by far my favorite – and no, I’m not talking about Carnaval!

I’m talking about the Santa Eulàlia festival, which celebrates one of the patron saints of Barcelona in early February. Eulàlia’s story is pretty grim, involving 13 tortures and a decapitation, but the festival is anything but – it’s lively and cheerful, adding a spot of brightness to chilly February.

The highlight of the Santa Eulàlia festival is LlumBCN, which combines the Catalan word for light (“llum”) and the airport code for Barcelona (BCN). It’s a huge light art festival, with displays of insanely creative light art taking over the prettiest places in the old city center.

Walking around the Gothic quarter at night is already a fairly cool experience, but when the buildings are lit up in dancing lights in jewel tones, it gets an extra touch of magic.

Patios and small squares transform into something quite different, like a neon blue forest dripping with light “rain”. Fountains light up with a custom show, accompanied by mysterious music and special effects. Gardens fill up with tunnels of twisted lights you can walk through to get disoriented.

But the biggest transformation happens in Plaça Sant Jaume, where the town hall building becomes the backdrop for a series of spectacular videos. Some of them cleverly light up sections of the building to play with its shapes and forms; others manage to make the hall look like it’s actually moving.

This year’s videos included a quirky tour of Barcelona, a series of Catalan recipes being cooked up before your eyes (like the calçots below), and a moody techno song with accompanying images that contorted the building. But my favorite was a video that took you on a tour of the universe, adding sparkling stars and swirling galaxies to front of the 14th century building.

LlumBCN 2015 included three separate routes you could take, which were based around the cathedral, the Ramblas, and a path taking you down to the sea.

Almost all the major buildings in the Gothic Quarter were illuminated, along with a few specially opened patios (some belonging to palaces) that normally aren’t open.

This means you can also do an unusual nighttime tour of Barcelona, with a few pieces of very creative art along the way as an added bonus.

I could have spent all night looking at the displays…except for 2 factors. #1 is they shut off the lights at midnight; I literally ran into the last place to get in before it closed (and I wasn’t the only one).

#2 is that February in Barcelona is REALLY cold! It gets down to freezing temperatures at night quite regularly, and the high humidity means that you really feel the cold all the way through. By 10 p.m., our group was pretty happy to nip into the nearest kebab shop and warm up our frigid little feet!

Still, any event that gets me outside in February has to be pretty spectacular, and LlumBCN definitely gives me a bright spot on the calendar to make my least favorite month a bit more bearable.

Also, I made a little video for the event! I tried out a different online editor that was a little limited, so it’s not perfect. When I can get my hands on a professional one again, I’ll update it and jazz it up a bit. 🙂

What’s the coolest art festival you’ve ever seen? Have you ever seen a light art show?