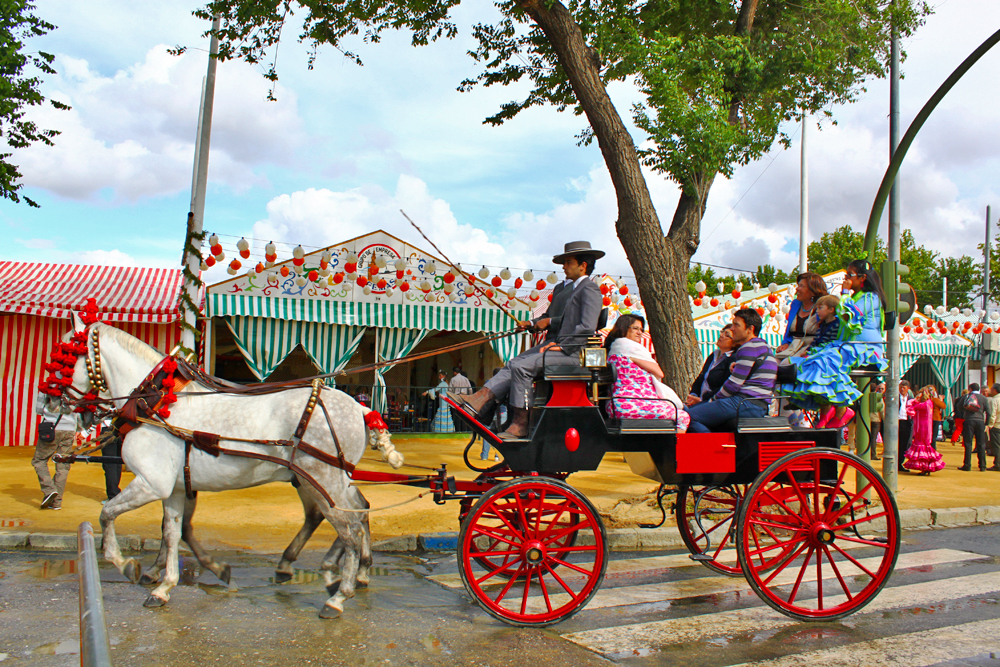 There’s no prettier season than spring in Spain. Yeah, summer is nice, but the trade-off is dealing with huge numbers of visitors. Fall is pretty too, but it’s always a little bittersweet for me, because I know winter is coming. Winter…well, let’s not even talk about that one!

But apart from the good weather and the feeling that the cities are waking up after the chilly winter, there’s one more reason you should travel to Spain in the spring – its festivals.

Three of the most beautiful and unique Spanish festivals are held in the springtime. From little Girona, tucked up in the northeastern corner of the country, to Sevilla, all the way down in the south, the whole country seems like it’s celebrating come primavera. It’s my not-so-secret dream to spend a year traveling around Spain from festival for festival – there are just so many to see!

So, without further ado, here are 3 of the coolest springtime Spanish festivals.

Girona: The Time of Flowers – The Temps de Flors

Just a 40-minute high-speed train ride away from Barcelona, medieval city Girona is one of my all-time favorite places in Spain. It’s filled with charming little corners and quirky legends, and as a bonus it’s right on the river.

The city is worth a visit any time of the year, but during the first week of May it becomes flat-out outrageously lovely. The entire place gets covered in carefully arranged displays of colorful fresh flowers.

The major sights, like the cathedral and Eiffel Bridge, get a coating of flowers, of course, but so do places you might not get to see otherwise, like the patios of old palaces and other similarly fancy buildings.

If you’re going to be in Barcelona in early May, I’d highly recommend trying to squeeze in a day trip to see the beautiful flowers. I like it so much that I’ve voluntarily gone alone on cold, rainy days just to see that year’s displays.

Pro tip: the flowers are nicer at the beginning of the festival, as towards the end of the week they start to droop a teeny tiny bit. They still look fantastic though!

2015 dates: 15th – 19th of March (although there are things you can see in the week or so leading up to the festival)

Every year in mid-March, the city of Valencia almost literally explodes for the raucous Las Fallas festival.  The firework-happy vibes at Las Fallas almost guarantee that you’ll have a good time here…even if the price to pay is a slight ringing sound following you around for days afterwards.

If there was any festival guaranteed to leave you half-deaf for a week afterwards, then this is it!

Apart from being a fantastic round the clock street party, Las Fallas will also give you a chance to glimpse some of Valencia’s coolest traditions. The women’s ‘falleras’ dresses and hairstyles are particularly beautiful (and I really wanted to try one on myself!).

The second big tradition you’ll be able to see is the ‘ninots‘ –  giant sculptures Valencians spend the entire year working on for the festival according to that year’s theme. The ninots can be up to FIVE stories tall.

They often represent current events, and Spain’s politicians always manage to give them plenty of material ripe for pointed, sarcastic commentary. It’s nice to have a Spanish friend along, in case you miss some of the political messages.

So where does the world ‘fallas‘ come in? That’s the event where everyone takes out their ninots to show off their handiwork. Of course, as they’ve put so much work into the ninots over the course of a year….the sculptures are burned to a crisp in a whirlwind of fireworks and flames.

Yep, all of the carefully built ninots quite literally go up in flames. I guess I should mention at this point that ‘falla‘ means torch! The Cremà – the burning – is a pyromaniac’s dream, as the sculptures have fireworks inside that go off as the outer layers burn away.

Don’t miss out on the daily ‘mascleta’, held at 2 p.m. at the town hall square. It involves, quite naturally, lots of noise and crowds.

Read more: Las Fallas – The Loudest Party I’ve Ever Been To

As you might guess from the name, the April Fair is held in April every year…or at least, mostly every year – every so often the Feria de Abril is actually held in May. That’s because the date of the Feria depends on when Easter is that particular year.

But on a less confusing note, the Feria is essentially a huge showcase for some of the most beautiful traditions in Andalucía. There are ferias held all over the region, though Sevilla’s is the biggest and most glamorous.

You’ll see thousands of women flounce around in gorgeous flamenco dresses, accompanied by men dressed up to the nines in handsome suits and ‘trajes cortos‘.

Even the horses get fancied up for the Feria; you’ll see hundreds of them decked out in flowers and bells, sometimes being ridden, or sometimes pulling a carriage of elegantly dressed sevillanos.

For most casetas, you have to be invited inside, but there are some public ones too. Go on in and enjoy a glass of rebujito – that’s a mix of sherry and 7-up, enjoyed at the Feria in tiny chilled thimblefuls. Once you’ve had a good dose of liquid courage, have a go at dancing the traditional sevillanas yourself!

While I’m not personally a fan of the Feria (I definitely got a snooty society ball vibe from it), there’s no doubt that it’s an incredibly beautiful and colorful affair.

Read more: Why I Hated the Feria de Abril, But You Should Try it Anyway

No matter what kind of festival mood you’re in, it’s almost certain that there’ll be something in Spain to fit what you’re looking for. This is a country that loves to party, and they definitely know how to do it in style.

Which one of these three festivals would you most like to go to? Have you been to any of them?