5 Great Places to Visit in Catalonia that Aren’t Barcelona! 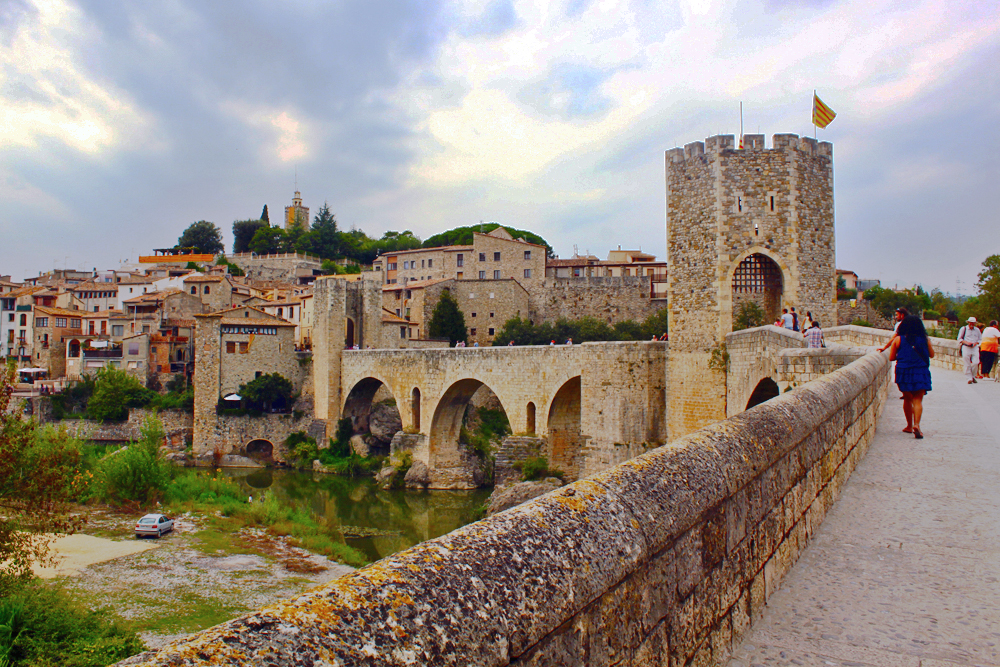 If you spend a good chunk of time traveling around Spain, you’ll probably realize fairly quickly that each section of the country here has its own personality, its own history, and generally its own thing going on. For one not-so-huge country, there’s a ton of fantastic stuff to see here.

And I’ve found that the very best way to get to know an area is to visit places other than its biggest city.

When it comes to the autonomous community of Catalonia, Barcelona is far and above its most famous city; before studying abroad here, I probably would have been hard-pressed to name any other Catalan cities.  But this area has quite a few other places that you really should add to your travel list.

This is my compilation of the best places to visit in Catalonia that aren’t Barcelona….which I want to make clear are just the places I’ve visited! I’m sure there are lots, lots more places that are worth a trip.

Stepping into the center of Besalú, it almost feels like you’ve traveled back in time. It’s got a well-preserved medieval section and a maze of winding streets that are very tempting to get lost in.

This actually used to be quite an important city…but we’re talking about back in the 10th century or so here! Things have changed a lot over the centuries, and today it’s a sleepy little town – just over 2,300 people live here.

I visited on a sunny Saturday in the early fall, and Besalú was mostly filled with families out for a day trip. I’d imagine that mid-week it’s probably a pretty silent place.

The highlight of the town is its gorgeous old bridge that spans the Fluvià river. Walk across it, and you’ll get some great views of Besalú. It’s worth checking out the river banks too, as I spotted groups of locals getting together to go fishing or swimming.

For artsy types hoping to follow in the footsteps of the greats, Cadaqués should definitely be on your itinerary, as Dalí, Picasso, Miró, and Duchamp have all spent time here. It’s also a good little place to visit for a relaxing seaside stop.

This is one of those beautiful pueblos blancos that Spain is so proud of, and the gleaming white houses pair perfectly with the blue waves of the Mediterranean lapping the coastline. There are wonderful views around pretty much every corner as you walk along the coast here, whether it’s a funky modernist building or a sweeping perspective of the wild Costa Brava.

The only downside to Cadaqués is that the drive to get to the village is nothing short of terrifying. It’s a tiny mountain road with sharp bends and twists. There are beautiful views, but I was too scared to enjoy them; I was worried my sweaty, shaking palms were going slip off the wheel and make us tip over the side of the cliff.

Still, we got there safely, and it was lovely once we did!

I may have mentioned before on my blog that nature and I aren’t exactly at one with each other. Still, every so often I find myself in the middle of nature (sometimes much to my dismay). So while I would have never picked Olot as a place to visit if I’d been in charge of the itinerary, I was very glad that I went.

Because really, how often do you get to truthfully say that you ate breakfast while sitting in a volcano?

Olot is perfect if you love hiking, because you get to hike up and inside real, actual volcanoes. There are miles and miles of gorgeous countryside to explore, and you can have quite a pleasant day walking between volcanoes to get to ancient villages. If you go far enough, you can even make it to the Fageda d’en Jordà, a forest that has managed to spring up from the now-frozen lava flow from the nearby volcanoes.

The city of Olot is quite cute too, as it has a selection of very cool modernist buildings, a nice little farmer’s market, and, in the summer, lots of outdoor terrace bars and restaurants to sit back and enjoy the views of the surrounding countryside from.

It’s only fair to mention that while I was glad to have seen Olot, I was also glad to get back to the big city after just 1.5 days here.

But as I’m the type of person who thinks the countryside could be more accurately termed “The Mediocre Outdoors”, you probably shouldn’t take me very seriously when it comes to recommending amounts of time to spend hiking.  (My general rule of thumb is none at all).

The Wineries – Vino at its Very Best

OK, this one is cheating a bit, as it covers multiple places in Catalonia. This area is absolutely packed with places to go wine tasting, even though it’s nearby La Rioja that’s probably the most famous wine region in Spain. But there’s lots of excellent wine here too, and there are a few cool festivals and unusual wineries in Catalonia that make vino tasting here even more fun.

Out of Catalan wine tasting zones, Penedès is the best-known one. In the south of Catalonia, it’s sandwiched between the mountains and the sea, so there’s some pretty spectacular scenery here. There are tons of tours that will take you through the wineries, lots of which are right in the middle of layers and layers of green, rolling hills.

It’s an easy day trip from Barcelona, and I started off a very pleasant Friday with  quick after-work trip for a springtime wine and jazz festival.

Also close to Barcelona is the Pla de Bages region, one of the smallest areas in Spain producing “Denominación de Origen” wines  – that’s a label that officially deems a food or wine product one of the highest quality in all of Spain. (And if a product gets this title, you’ll definitely know – it will probably be written all over the product’s packaging!). This region I visited in the fall, and enjoyed tasting some wines in a 10th-century castle.

Of course, to get a real Catalonian experience at any wineries in the area, you’ll want to try cava – that’s the Catalan sparkling wine (I am a huge fan). ¡Salut!

Girona – The City Alternative to Barcelona

For my list, I’ve saved my favorite place for last, and that’s Girona, a colorful city on the Onyar river to the north of Catalonia. Now, I undoubtedly prefer cities to smaller towns, so that plays a role in part of the appeal of Girona.

But not all of its appeal. Even if you’re not normally a city traveler, it’s quite easy to be taken with Girona. This small city is packed full of fascinating history, quirky legends, and beautiful festivals.

And that’s not to mention all the spectacular buildings, whether that’s the enormous cathedral with its peaceful cloister or the angular Eiffel Bridge, whose bright red railings create very cool frames for the houses hanging over the river.

If you’re in Barcelona, I highly recommend taking a day trip to Girona, because it’ll give you a totally different perspective on the cities here. It’s only a 40-minute high-speed train ride away, but it’s completely different. It really doesn’t have much in common with Barcelona at all, except for the fact that I love them both!

From coastline to mountain tops, there’s a little bit of everything in Catalonia. And like I said at the beginning of this post, this only covers the corners I’ve seen of this autonomous community – I know there’s lots more to see!

But at the very least, I hope I’ve managed to convince you that there’s much more to Catalonia than just Barcelona…and that’s coming from somebody who seriously loves Barcelona!

Have you been to any places in Catalonia that aren’t Barcelona? Which one of these places would you most like to visit?