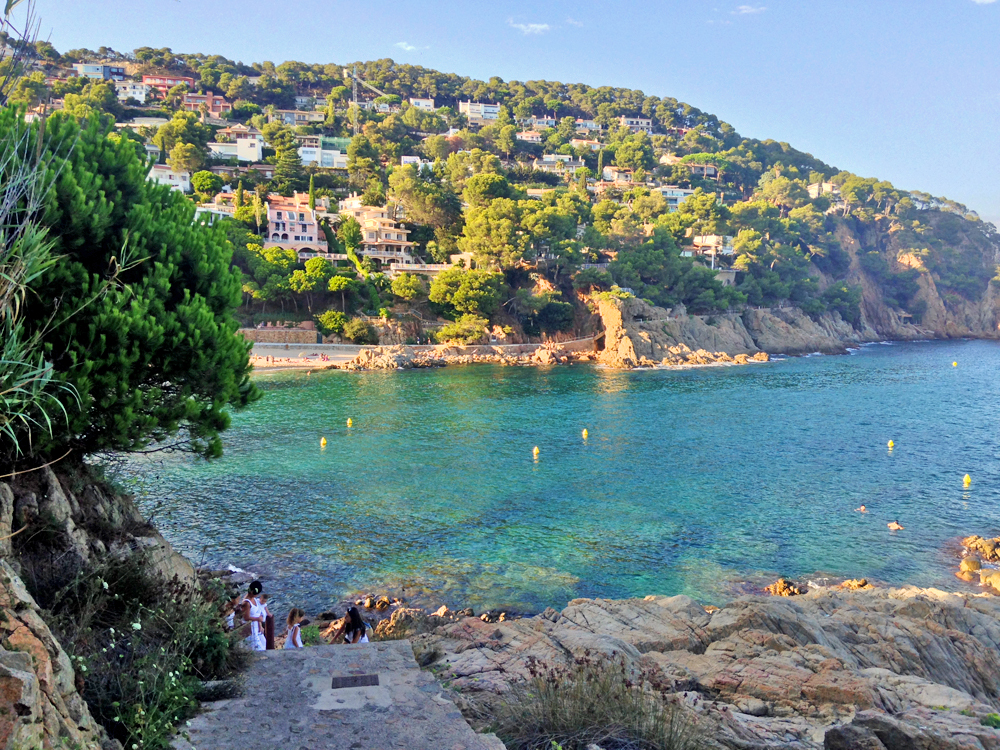 In keeping with what seems like the whole of Spain’s habit of going on vacation for all of August, my blog took a little break of its own this past month. Or rather, I was too busy enjoying everything that summer has to offer to bother doing something like staying inside updating my blog.

I was also busy working on some new freelancing projects – because I’m a real, actual, tax-paying freelancer now. (and boy, are there a lot of freelancing taxes in Spain).

Anyway, to gently ease back into blogging, here are some of the highlights of another summer full of travel and beach time. Really, is there any better way to spend the summer? If there is, please let me know!

One of my all-time favorite places to explore is the U.K. There are so many wonderful places to visit (like Yorkshire, or some of the real-life places that inspired the Harry Potter series) and some of the most gorgeous countryside ever.

But I’m a city girl at heart. A scenic field of flowers will just never be as beautiful to me as a huge, bustling city. So I was thrilled to get the chance to re-visit London and Edinburgh at the very start of summer.

I had a flying 24-hour stomp through London that only left me wanting to go back for a longer stay, then I took the bus up to Edinburgh to visit one of my best friends in the entire universe.

On the way up, I had a bit of a travel disaster (a multi-day Scottish Highlands trip I was supposed to be going on fell through at the last minute because of a booking error), so I ended up having 10 whole days in Edinburgh to myself.

I could have gone out and done more in Edinburgh, but it was actually a welcome break to just chill, eat some amazing food in good company, and gently explore. It felt good to just relax and have a think through my ongoing life crisis for a little while.

Read more about the U.K.: 10 Things You Didn’t Know About Edinburgh’s Royal Mile

Family Travel in Austria and Slovakia

Every year, I end up doing some kind of traveling with my family, whether it’s a quick weekend getaway to the beach in California or a longer trip. This year, the four of us met up in Vienna, Austria, and traveled from there.

While I found Vienna to be quite a dull and expensive city (sorry), it was visually stunning, full of elegant touches on every corner. Our trip was accordingly fancy, and we spent our days doing things like visiting palaces and having afternoon pick-me-ups of beautifully baked slices of cake.

Although I didn’t love Vienna, they do know how to make a fantastic cake there – more on that to come soon.

Because we had so many days in Vienna, we also did some fun little side trips. We had an evening out at the wineries on the outskirts of the city, a Danube river cruise hopping from town to town, and a day trip to Slovakia. And I finally got to go to a cat café too!

Bratislava, Slovakia, was quite small, but I actually liked the old city center a lot. It’s a bit like a run-down version of Prague, but cheaper and way less crowded. It’s a really interesting way to spend the day, and the contrast between fancy Vienna and Bratislava is huge, even though they’re only couple hours away from each other by train.

I’m always on the lookout for cool new things to do in Barcelona. A huge part of the fun of living in a big city is that there are pretty much endless possibilities for fun things to do. This summer, I:

Took a cruise on the Mediterranean:

Had lunch with a man who’s robbed over 150 banks (more to come on this soon!):

Sneaked into a music festival with some of my best friends to see my all-time favorite band play:

Got fancy at a magical rooftop concert at Casa Batlló:

Did a live video stream to thousands of viewers through “yuccie” Sant Antoni:

Tried out the raw food trend to support an upcoming sustainable tourism event in Barcelona – and found out that when it’s done well, it’s incredibly delicious:

Got in touch with my inner 8-year-old with three of my best friends and learned how to swim like a mermaid (more to come on this one, too):

And that’s just a little slice of what made my summer so great! Even though it was one of the hottest, stickiest summers ever (ew), I still had a fantastic time. Although I am a tiny bit relieved that fall is here.

For the first time in Spain, I took a trip with my girlfriends! Three of us jumped on a cheap flight to the south of Spain for a week of tapas, beaches, and fun.

We had incredibly bad luck in some parts of the trip – namely, the party scene. It seemed like no matter where we went, nobody was there.

But while we had a hard time finding any wild and crazy parties to attend, we did see some seriously incredible beaches and ate and drank a ridiculous amount at ridiculously cheap prices.

I had a great time and would absolutely in a heartbeat go on another trip with these girls – which is just as well, as we might be cooking a little something up related to travel. 🙂

So one of the major upsides to living in Barcelona is that the city is right on the beach. Yeah, the city beaches aren’t the nicest or cleanest beaches around, and are perpetually crowded from about April onwards, but they have the distinct benefit of being a 20-minute bike ride from my door, tops.

There’s no better way to reward yourself after a day of work (er…of which I have had very few lately, having been unemployed and all!) than biking down to the beach and meeting friends there.

I also got out and about to a few of the nearby beaches that aren’t quite as busy, from little Garraf to the south of the city to the Costa Brava, where I ate the best ‘arroz negro’ (a rice dish like paella that’s cooked in black squid ink) that exists on the planet (probably).

Because I’m officially a freelancer now, I took advantage of all the beach time quite a bit this summer. Some days I went and had a coffee with a cheeky splash of Bailey’s in it in the late morning with my roommate. Others I jumped on a train with other freelancing friends and split bottles of wine on the beach (followed by beers in a bar for a Barça match). And then there were the days I just went to the city beaches and enjoyed a couple of ‘cerveza amigo’ beers.

As you might have guessed, spending so much time being tipsy on the beach meant that while my summer was quite a bit of fun, I’m going to have to buckle down this fall and get to actual work, instead of pretending that I’ll just get around to sending out pitches after the beach.

It’s amazing how quickly half a bottle of wine will make you conveniently forget all about silly things like resumés and alarm clocks for the rest of the day (leading to a panic the following day).

So yeah, this fall I’m aiming for more balance in my freelancing life (a.k.a. less beer and more work).

As summer comes to a close, I’m enjoying looking back at a summer that was pretty incredible. It’s probably the happiest I’ve been since I graduated college four years ago, which was a nice change. Things have settled a tiny bit, and I’m not in the flat-out panic I was a few months ago.

But things are still shifting and changing a lot in my life – what else is new? – and I’m going to be spending the fall trying to figure out how to make this new phase work. I didn’t exactly choose to become a freelancer. It just kind of happened, and I’m still trying to learn how get my balance.

I suspect most people probably do this the other way around – they decide what they’re going to do, send out pitches, and see what happens. I was lucky enough to get approached for some positions, and now I have to decide what exactly it is I’m going to do.

So I’m definitely looking for and open to new projects. Although being a freelancer has caught me by surprise and I have a lot to learn, I’m sure that whatever comes next will be a great chance to learn lots of new skills – and learning new stuff is something that’s always a positive (even if the actual learning process is tough).

Hopefully, a few months from now, I’ll have solidified some more consistent income streams (or I may have to re-think this whole freelancing thing).

And honestly, after spending so many months being unemployed, it’s a relief to have some sort of work again. Sitting on your couch for months on end is not fun, even if it’s in a cool place like Barcelona. While I was traveling a lot and doing fun things, not having anything real to do with my time was weirdly quite stressful.

I’m finding it much harder than I expected to shift back into working mode – especially as this sort of work means you have to be extremely disciplined – but bit by bit, I’m feeling more productive again, and I’m snapping out of unemployed couch potato mode back into my regular self. Bit by bit.

What I’m trying to do.

Well, I just hopped on a cheap last-minute flight home to California for a couple weeks and am enjoying squeezing the last drops of sun out of the summer.

I’m organizing some fun activities to do in Barcelona that I’m really excited about.

And I’m talking with friends about doing some traveling together to completely new places.

So while I don’t have much fixed down yet, I’m pretty certain that the rest of 2015 is going to have some pretty incredible opportunities. I’m feeling simultaneously excited and very nervous about what’s coming next. But after a summer filled with surprises (not all of them good; some of them amazing) and adventures, I’m looking forward to seeing what’s going to happen.

Tell me – what did you do with your summer this year? What are your upcoming plans for the fall?