5 of the Best Foodie Experiences in Barcelona 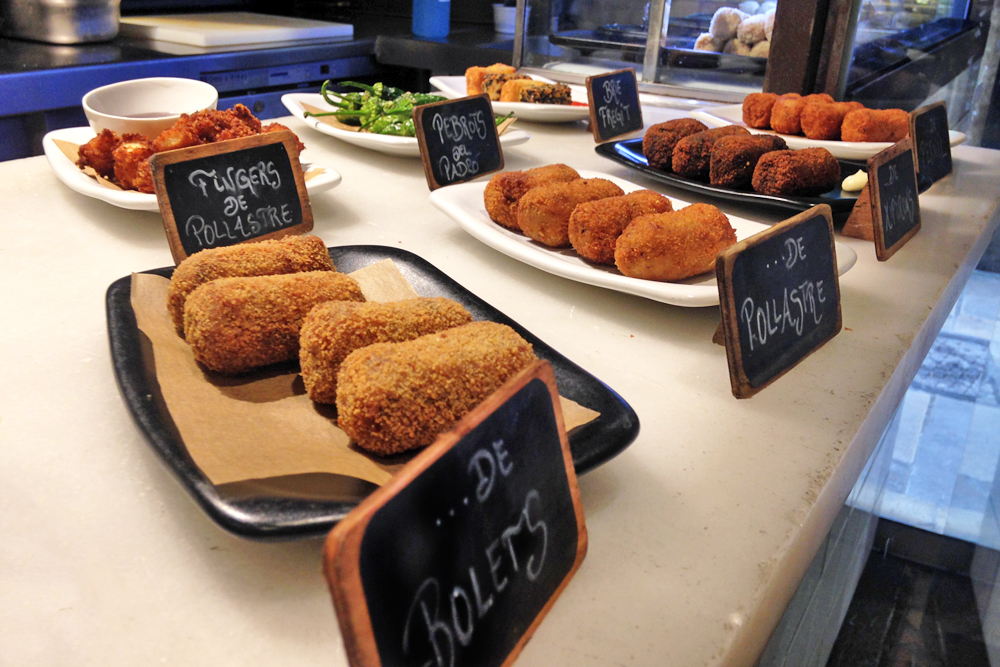 There’s no shortage of fantastic places to eat in Barcelona. But did you know that there are tons of off-the-beaten track ways to get your foodie fix?

With the huge numbers of tourists visiting the city hungry to discover its food culture, restaurants have to work really hard to stand out from the crowd. Choose wisely and you’ll go home with a tummy full of incredible food and a whole bunch of knowledge about the local culture.

Choose poorly (by which I mean choosing to eat on Las Ramblas), and you’ll probably come away with the impression that Barcelona is full of expensive, terrible food. That’s not entirely true, but there are certainly a large number of truly bad tourist traps. I’ve fallen for a few myself!

But these five foodie things to do in Barcelona are all something very special, and certainly tasty. I’m not much of a foodie, but I do know a good thing when I see it…or, as the case may be, taste it!

These five food experiences in Barcelona really go beyond your average tapas bar.

Pumm Barcelona does a seriously fun tapas tour where you get to bike around the city sampling some of the best old-school Barcelona tapas bars (yes, there are a few that exist!). You’ll get to munch on traditional tapas like tiny fried whitebait and more modern creations like smoked salmon with truffle oil and cream cheese.

Even better? You get to do it on a lightweight folding Brompton bike. Even better yet? You get to finish the night off at one of Barcelona’s coolest bars or an underground jazz club.

I went home from this tour full, tipsy, and feeling like I’d discovered an entirely new side of Barcelona.

After a heavy day of sightseeing, a bike tour was actually welcome – it lets you see lots of the city without tiring out your feet!

Spanish food has a reputation for being pretty spectacular. German food? Not so much. So combining the two might seem a little offbeat, until you realize that the mixture actually works.

At the Fàbrica Moritz  (Moritz Factory) in the Sant Antoni area of Barcelona, they serve up a curious mixture of tapas and German staples like sausages and sauerkraut. Weird? Definitely. Delicious? Oh yeah!

I must admit, when the waiter said he was bringing a sausage course after I’d stuffed myself with tapas, I thought he was joking. Who combines heavy German traditional food with light and delicate tapas?

By the way, there is a reason for the odd combination. Mortiz is a local Barcelona beer, but made by an immigrant from the Alsace region of France. That’s why its name doesn’t exactly sound Spanish (or Catalan, for that matter), and why the food is such an unusual combination.

Tasty as the food is, though, the star of the show here is really the Moritz beer. Piped up fresh from the factory downstairs, regular drinkers swear it tastes different to the stuff sold in supermarkets.

Get in touch with your inner Catalan granddad

They say that everything eventually comes back into style if you wait long enough, and that’s certainly true for vermouth. It used to be the sort of drink your granddad might order, but it’s swung back into fashion. Now, it’s just as likely to be ordered by a 20-something hipster with too-tight cuffed jeans.

My favorite vermouth place has this sort of vibe too. It’s an old bar that’s been re-done with just enough modern touches to make it cool again.

The vermouth here is caramel colored white wine with extras – extra alcohol, extra sugar, and extra herbs. It’s supposed to be had before a big meal, but people might also talk about “doing” a vermouth, which sometimes means going from bar to bar having drinks and a little something. It’s sort of a Catalan version of doing tapas.

Seafood is popular, like salty anchovies soaked in olive oil, and so are potato chips. You can never go wrong with potato chips.

Where should you go to get your vermouth fix? Try this list from Time Out for some of the city’s best vermouth joints.

Eat in a 14th-century palace

The Mercat Princesa  – the Princess Market – has been converted from a 14th-century palace into a very 21st-century food hall. There are 17 stands serving different kinds of food – thinly sliced Spanish jamón, grilled fish straight from the sea, juicy mini slider burgers, individual pizzas, Basque pintxos or even sushi. All you have to do is show up and eat.

You get a card that lets you pay at all of the places individually, so you can end up having a really interesting mix of foods. I’m a big fan of trying lots of little tastes, and fully support the idea that if you want sushi alongside your pintxos, you should have it.

The prices are a little bit higher than other places, and as the food is all freshly prepared you do have to wait, but this is a really fun experience in an incredible building. It’s full of elements from the original palace but strung with pretty white lights for a romantic touch. It’s worth it to go once just to see it.

Definitely try the mushroom croquettes – they are incredible. Just writing about them makes my mouth water (quite literally!).

Learn to cook Spanish classics yourself

Of course, if you really want to get immersed in learning about Spanish food culture, the best way to do it is by cooking real local recipes yourself. BCN Kitchen runs a fun class that teaches you how to make some amazing dishes.

First, the professional chef takes you through the nearby Santa Caterina market and talks about Spanish market culture and how to select the freshest ingredients (like looking for the bloodiest fish you can find). You’ll then buy the ingredients and take them back to the cooking workshop.

I’ve been to other cooking classes here where they didn’t let you do much of the cooking – you might get to stir the paella once or twice if you were lucky. But this time, the chef called me up to the front right away – to help snap the heads off raw shrimp (shudder). So yeah, this is definitely not a “sit back and watch” kind of experience.

It’s also a lot of fun. I generally don’t enjoy cooking, but I had a great time here. Our chef Alvaro was super friendly, and because of all the wine glasses being constantly topped up, it felt like I was hanging out in a friend’s kitchen helping them make lunch.

We made gazpacho, tortilla, paella, and crema catalana to finish. The tortilla Alvaro helped us to cook up honestly ranks as the best one I’ve ever tasted. And because I got to participate in making the food, I went away feeling like I could actually recreate the dishes on my own (you get the recipes to take home).

The Spanish cooking experience costs €65 for the market trip, the cooking demonstration, and of course eating the results of your hard work. It’s not cheap, but it is a whole lot of fun.

So, there you have it – five food experiences in Barcelona that are more than just eating out. This city is legitimately full of lovely places to eat and drink. And if you go to the right places, you can learn lots about the local culture while you’re at it.

But remember, stay away from Las Ramblas. 🙂

Any other great foodie things to do in Barcelona that I’ve missed out? I know there is much, much more than just this!

Thank you to Barcelona Turisme for three days of fun and food in the city! I went to all the places on this list (with the exception of the vermouth bars) with them.