That One Time I Went to Mermaid School 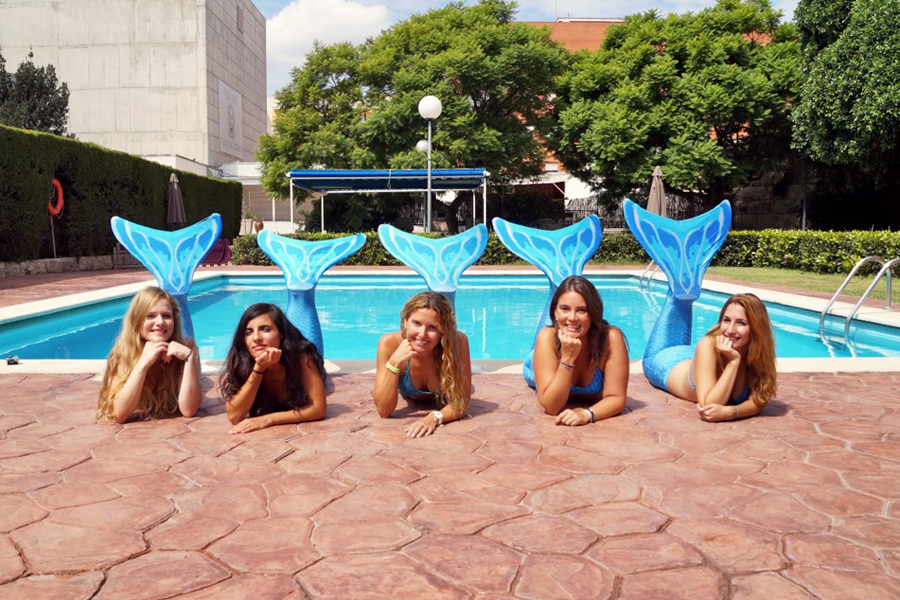 “Let’s go be mermaids!” isn’t exactly the sort of message I usually get from my friends. Nor is it a message that I took very seriously when I read it.

But much to my surprise, it was a real message. And even more surprising, I was off to mermaid school myself a few weeks later.

You know, to be a mermaid.

To answer your first question – yes, mermaid school is a real thing!

When I first heard about it, I’ll be honest – I was more than a little skeptical. I’d actually already made up my mind that I wasn’t going. Except…I didn’t want to be the only one of my friends left out. FOMO, right?

So I said I’d go, but secretly thought it sounded a little lame.

I still thought that when I saw the previous class splashing about – a huge family whose grandma had surprised them with a quirky day out to celebrate the end of summer. They were laughing and looked like they were having a great time, but I still wasn’t convinced mermaid swimming was for anyone over the age of eight.

But by the end of the day, I couldn’t have been happier that I spent my day at Sirenas Mediterranean Academy’s mermaid school in Tarragona.

The day started off on an unexpected note. Instead of diving directly into the pool, we got a short rundown of legends from around the world about mermaids and sirens (yep, they’re different). The instructor, Susana, knew all sorts of interesting mermaid-related stories, from the Greek tales about sirens to Scotland’s selkies to of course, Ariel.

She also explained a few different ways to swim with the mermaid tails on.

Then it was time to get our feet, or rather, fins, wet.

The mermaid tails are quite cleverly designed. The tip of the tail is made of a foam board, and the part that goes over your legs is similar to bathing suit material, but thinner and more flexible. Where the foam connects to the tail, there are “socks” joined together that keep your feet in position inside the tail.

We each got a teal blue tail and matching top to start our mermaid “baptism”. We dove right in and started trying to put into practice what we’d been told on dry land.

But it turns out that swimming with a tail attached to your legs is much harder than it looks!

I’m afraid I sank rather than swam at the beginning of the class, but Susana gently guided us from clumsily flopping across the pool to making graceful mermaid movements in just a couple of hours.

We got to try out lots of different styles of “mermaid” swimming and played a few games, too. The session flew by, and we had lots of fun trying to figure out the movements and messing around in the pool. By the time we felt the cold and wanted to get out of the pool, two hours had somehow gone by and we’d laughed the whole way through.

I’d thought that mermaid school was just for kids, but I was totally mistaken. The four of us – ages 25-31 – all had a fantastic morning playing in the pool. It’s actually a really cool way to do something a bit different with your friends, and the two instructors made sure everyone was having a great time.

Because I had such an awesome time doing this as a 26-year-old, I can only imagine how blown away I would have been by the experience as a kid. This would have been a literal dream come true!

Even now, I still found myself being enchanted by the idea of mermaids and getting to make a fantasy come true for a day.

Oh, and of course, there’s really only one thing to do when you’re dressed up as a mermaid with your friends – and that’s to take lots and lots of pictures!

(Thanks to my friends for a convincing me to go! From left to right, it’s me, Travel to Happiness, Susana the mermaid instructor, A Donde Quiera Que Vaya, and Meridiano 180).

Would you take the chance to learn to swim like Ariel at mermaid school?

Thanks to Sirenas Mediterranean Academy for a very fun and unusual day out! You can check out more details here at their website. I was under no obligation to post on my blog about them, but had so much fun that I did.

The classes take place in hotel swimming pools (for beginners) or in the sea (for more advanced mermaids). You can also have them come to your pool for an at-home session. Their schools is the only one in the Mediterranean, so this is a pretty unique thing to do for a day trip from Barcelona!