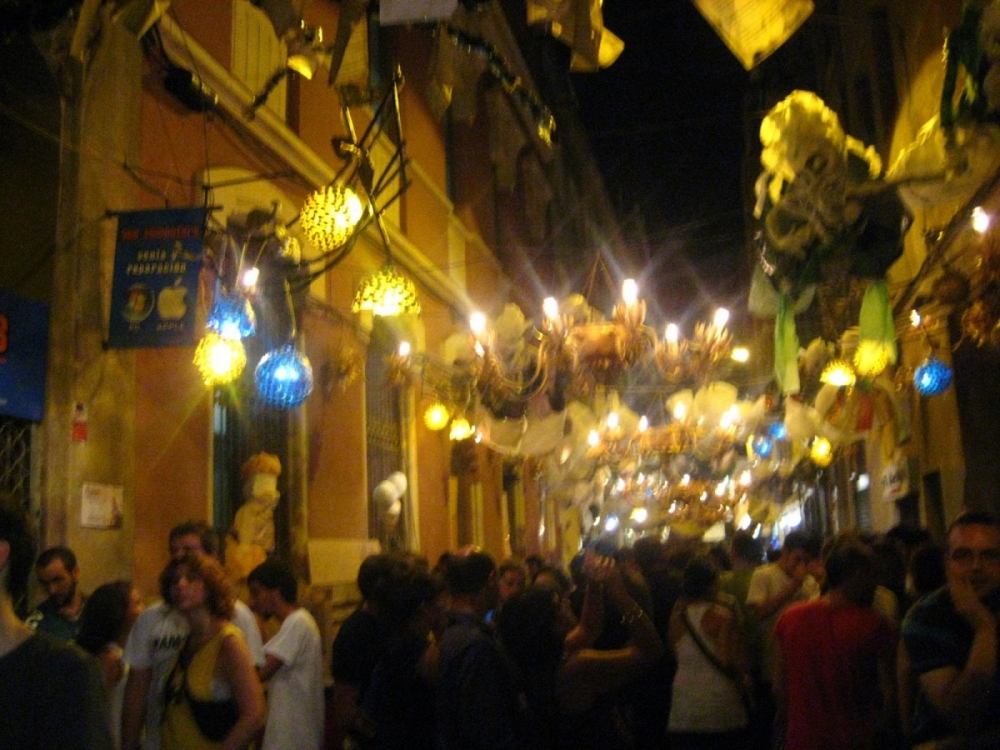 During my first summer in Barcelona, I heard people talking excitedly about the Gràcia festival. I had no idea what they were so happy about. So I asked around a bit, and found out that the people of the neighborhood decorated the streets, put on local events, and had concerts for a week in August. Sounds like a pretty normal local fair, right?

I was blown away when I showed up to Gràcia one day and found that every street looked like this (you may have already guessed it’s something special from the other photos):

Gràcia is a bohemian-chic neighborhood of Barcelona that’s crammed full of narrow streets with fabulous buildings, but the real life of the neighborhood is in the many plazas that are always full of social life. Check back to read more about Gràcia later!

Anyway, each street that chooses to participate picks a theme and decorates accordingly. The decorations are handmade and seriously creative. This year, I saw  an Aztec temple, a jungle, alien attackers, and a giant matchbox. Mozart Street was decorated like a zombie symphony had taken over, and it had loads of glowing, sparkly instruments strung up.  It’s like walking into a giant handmade theme park.


But the decorations aren’t just there to add to the excitement and look pretty; they’re actually part of a contest too! At the end of the festival, the residents choose which street has the best decorations.

Other than look at the pretty decorations, there’s a ton of amazing stuff to do as well. Even if lots of people here consider themselves more Catalan than Spanish, they definitely share the Spanish love of parties and know how to put on a great one! The festivities start around noon and go until the wee hours of the morning – and the streets are jammed with people around the clock.

The daytime activities are a bit more neighborhood oriented and child-friendly. The streets are full of tables and chairs, so the residents just spill out onto the street all day. There are always meal and food-related events going on, but there are other things happening too. One street had puzzle contests on the tables, and another had a special magician for the children mid-aftrernoon. I even saw a street where a few of the neighbors had dragged down their special siesta chairs and were napping together! The picture on the left shows the Peter Pan street that had set up a crepe-making stand in the middle of the road – it smelled so good! The famous Catalan castellers perform during the day too, but I missed them again this year. (UPDATE: I did catch them later at La Mercè).

At nighttime, the full-blown fiesta begins! The beautifully decorated streets turn into magical glowing pathways, and the cerveza and vino start flowing.  Bars open their doors, and the plazas fill up with people botellón-ing (drinking in public places). The buzz is incredible just from the sheer amount of happy people, and it gets even better when you explore the huge variety of concerts, shows, and comedy routines on all night. Everybody is there to have a seriously good time, and there’s something for everyone to  enjoy!

This is definitely not your average barrio festival! So, here’s some practical information so you can go too:

Where: Barcelona’s Gràcia neighborhood – the upper limit is Gaudí’s famous Parc Guell, and the lower limit is Diagonal.
When: Mid-August every year. The dates vary, but it always goes for a full week.
How to get around: By foot is the only option!
What to bring: A fiesta spirit, and maybe some drinking spirits as well.
How much does it cost?:  It’s FREE!

And don’t get too sad when the Gràcia festival ends – the next week, another neighborhood, Sants, puts on its own version! Each neighborhood does its own festival, so you can spend all of August and September hopping from barri to barri to check out the different Festa Majors. Gràcia’s is the biggest and best, but the other ones are good fun as well.