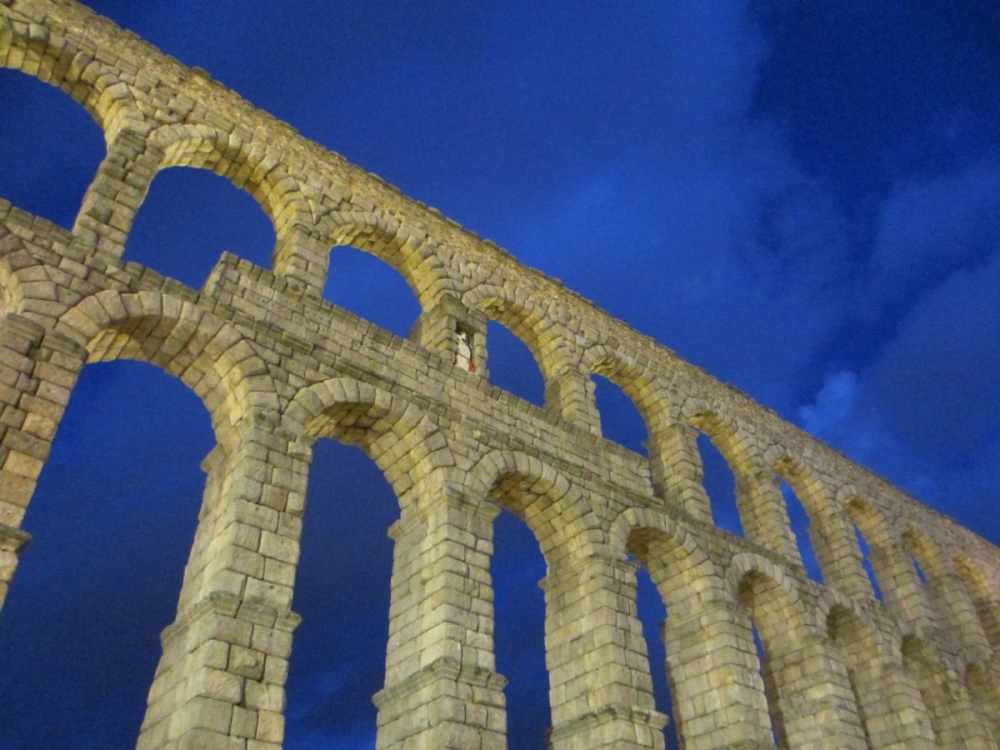 You know how sometimes food is a good snapshot of what a culture is really like? Well, experiencing Spanish food has definitely drummed home the message that they are really NOT a squeamish people. The people of Segovia eat entire tiny baby pigs…among other notable cultural achievements!

(Note: This is the last post in my series on my trip to Castilla y León. Check out my other posts on medieval Ávila and gorgeous Salamanca for the full experience!)

On Sunday morning we woke up in Salamanca to a gentle drizzle, some pretty sore feet, and serious ganas to keep on sleeping. Luckily, we got the chance to do just that as we took off for gorgeous Segovia! (I’ve put a big slideshow of photos at the end of the post so you can see how incredible it is.)

The whole bus ride there, the trip leaders were trying to convince us to try cochinillo, the local speciality. What’s that, you might ask? They kept trying to explain it to us as a delicious baby pig that had only ever eaten milk – so when they gave the explanation again in English, they referred to cochinillo as “the milky pig” and “delicious.”

I still wasn’t too sure about trying said delicacy, and quickly forgot about it as I passed out watching the rain-soaked landscape of fields and tiny villages. Soon enough, we arrived in gorgeous Segovia, which has a gigantic Roman aqueduct, a huge domed cathedral, and a fairytale castle.

But before seeing the pretty sights, I was confronted by the sight of the famous cochinillo in restaurant windows. Lying in almost every one were entire dead baby pigs. I did my best to suppress a shriek. But every single thought of being culturally accepting by means of food rushed out of my head. Check it out:

It is NOT napping! Photo Credit: Ela Derezo

So I had a more tame lunch of a chicken sandwich and beer. Then, onto the sightseeing! Let me just say it was seriously cold – my fingertips, nose, cheeks, and toes were frozen.

First up was the Roman aqueduct, which is from the first or second century. It’s almost 2,700 feet long and 95 feet high at the tallest point. AND, get this, they didn’t use any mortar! My tiny cerveza-soaked brain decided it was probably best not to think about that interesting fact when I was standing right under the highest point.

I knew it was a Roman aqueduct because there was a real Roman there!

Then we wound our way through the pretty streets to get a chance to see the Alcázar de Segovia, which is a beautiful old castle perched on a cliff. Our trip leaders swore it was the inspiration for the Disneyland castle. (But being from southern California, I spent quite a bit of time at Disneyland in high school and they’ve never once mentioned it – just the one in Germany). Judge for yourself:

It had some stunning views of the gorgeous countryside, and the inside was a proper Spanish castle. Most of it looked like a medieval castle out of a movie, but other bits had an Arabic touch, so it was breathtakingly beautiful. But, being a medieval castle, it was actually colder inside than outside.

Also in the castle with us were some hilarious Spanish tourists, who rushed straight into the armory exhibition. Then they immediately disregarded ALL the “DO NOT TOUCH” signs so they could take photos wielding swords and sitting on cannons.

The third stop was a guided tour of the city with a lovely guide, who started by teaching us the word resaca (hangover). We checked out the cathedral and the Plaza Mayor, which was really gorgeous.

Because it was Sunday, there were lots of locals going to mass, even some in traditional clothing. One guy even let me and a friend try on his special cape! He chatted to us about the clothing, and his wife kept interrupting to explain what all the pins meant. They were all from his travels or hobbies – even though it was a traditional outfit, he wore stuff like motorcycle pins, which was a strange contrast.

At sunset, we wound our way back to the beautiful castle and watched the sun set over the incredible castellano-leonés landscape. It looked stunningly gorgeous, just like a fairytale. But it was also piercingly cold!

So with that, we walked back to the bus, freezing cold and exhausted from the long weekend…but also completely, blissfully happy to have spent the weekend somewhere so beautiful.

Oh, and the milky pig? I heard from other trip members that it was indeed, delicious. I just couldn’t bring myself to eat the thing! And the tour guides had meanwhile learned the English word for cochinillo and were practically falling over from laughing at it – they’d misheard it as sucking pig.

Want to read more about Segovia?

Other things of note that happened: