The Charming Cafe Marti in Barcelona 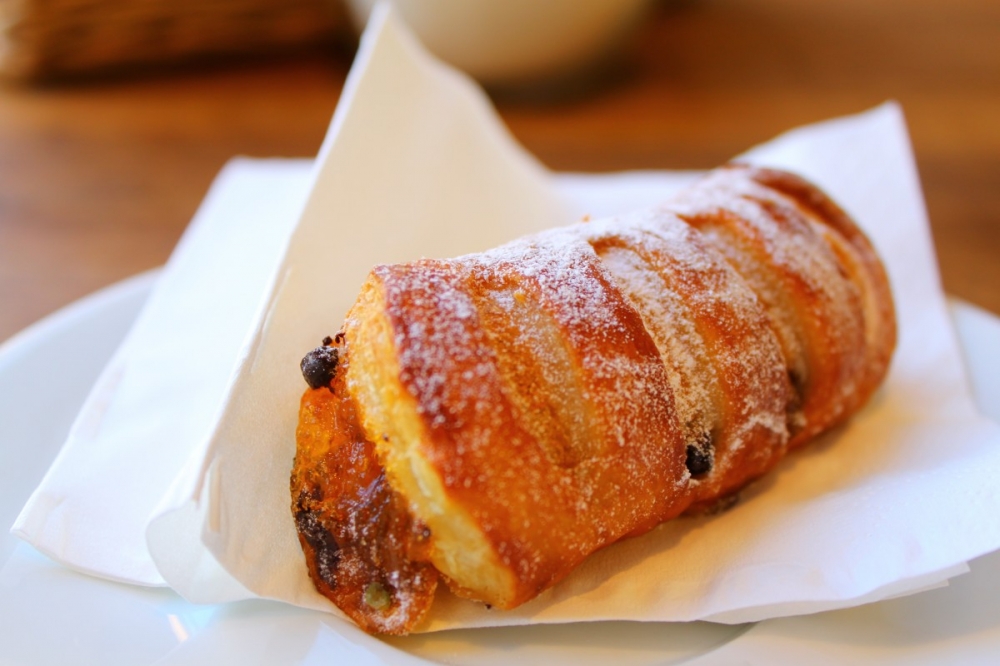 Welcome to my new favorite café – Cafe Marti in Barcelona! It’s a cute little café on a street corner near my apartment that has the best pastries ever.

Step inside past the windows with the day’s specials written on them in white paint, and you can instantly smell the freshly made café con leche and something tasty baking. In the middle of the lower floor is a huge display of the day’s baked goods, and to the right there’s a pretty cabinet displaying luscious cakes.

The chairs are bright and cheerful, and the tables and countertops light wood. There are baskets of flowers scattered around. The walls are painted a friendly yellow color, and the blue swirly ceiling looks like the sky. Where the walls and the ceiling meet, you can see a jumble of words and quotes painted on the wall. Look closely – they’re all about love and happiness.

It’s only been around for a few months, but it’s always full of people from my barri. It sells all kinds of delicious things, from freshly baked barras de pan to tasty sandwiches to mouth-watering pastries and cakes. They also have coffees, tea, and pretty much anything else you could want to drink with your afternoon snack.

It sells hot drinks to go, which is wayyy less common in Spain than it is in the States. So of course, it’s always full of students from all over the world dashing in and out to grab a quick cup of coffee before heading to class.

There are also families that stop by for a little something after school. Sometimes the odd tourist makes their way in and stumbles over hesitant Spanish mixed with lots of gesturing and smiling.

As the weather warms up slowly, more people are sitting outside. Every so often, somebody comes by with a dog and sits outside with the newspaper.

But my favorite people to watch are the retired and older people who come in in twos or threes to have their merienda with some friends. They sit and chatter for hours. After they leave, the construction workers come after a day of making lots of noise and destroying things on my street. Then the professionals in suits come by to unwind a little bit later.

As an added bonus, the staff there are so nice and friendly. I’ve only been a couple of times, but it’s so lovely every time I go. The coffee is standard Spanish fare, which is to say, great. The pastries are incredible.

Last time, I was so blown away by how tasty my chocolate and orange mini duo was, I told the lady working there it was the best thing I’d eaten in months (which was true). She told me “Espera un momento” and slipped me a secret extra treat to take home.

And best of all? It’s cheap as well as nice! So if you’re in Barcelona, make a stop at Cafe Marti for a lovely afternoon snack. Here’s the practical information: