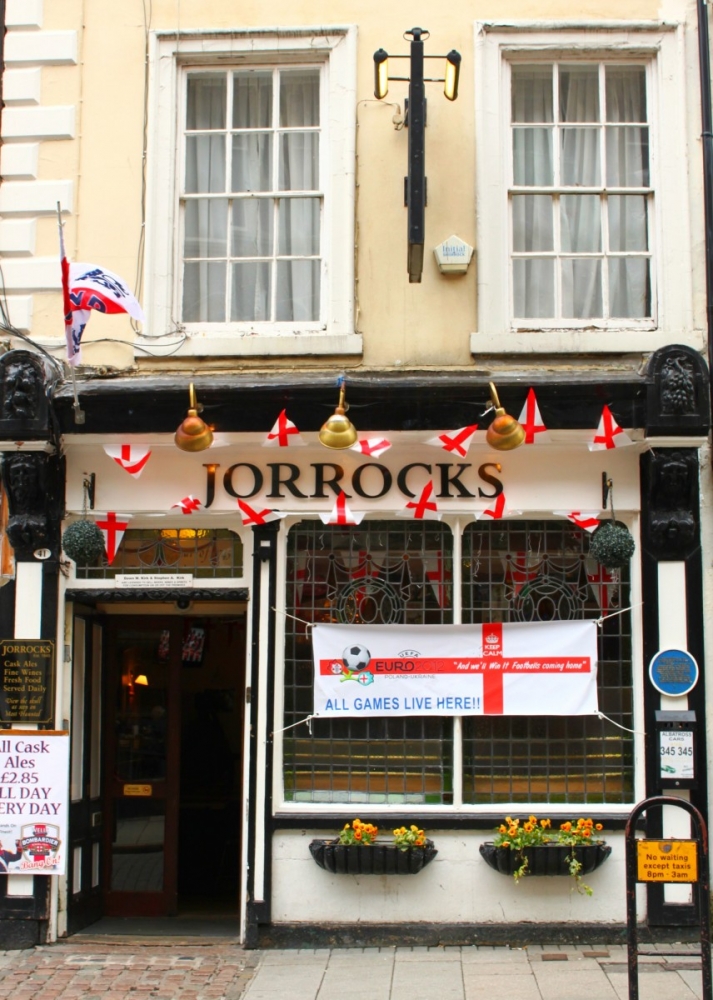 Even the flowers had their best colors out.

I’m briefly back in Barcelona between trips! The weekend before last, I went to England to see my family, and this past weekend I headed to Berlin to meet up with my parents and sister.I’ll write more about Berlin later, but first – England!

Let me just start off by saying I’ve never seen England in such a patriotic mood. The St. George’s cross was everywhere, along with flags in the Union Jack colors.

It was nice to have a weekend in England, though it was seriously freezing. Even the English were getting their coats out! This is the #1 reason that England only ever feels about 98% ‘home’ to me – the weather. I love England, but the relentless cold temperatures are really not my thing.

I was there for a quick family visit, so I didn’t feel pressure to do anything crazy touristy. I drank lots of tea, wandered around the town center, watched the Euro 2012 match, and went out to Nottingham to see a play.

The title of the play alone should give you an idea of what it was like: Death by Fatal Murder. The actors forgot lines and burst out laughing in the middle of a scene. I’m pretty sure they laughed more times than I did throughout the performance. But it was still nice to go and see something new.

Maybe the best part of the play?

Other than the play, everything was great!

I came back to Barcelona with an armful of English goodies. My grandma got me two lovely teacups in celebration of the Queen’s Silver Jubilee, and my auntie gave me a special tin of Jubilee shortbread biscuits to go with tea.

Just to make sure I got enough usage out of my teacups, my grandma also gave me a stash of 100 bags of Yorkshire Tea. I’m still shocked it all fit in my Ryanair-approved carry-on!

In addition to my tea-related acquisitions, I am also the proud new owner of a teeny tiny crop top that ends before my ribcage does. It is 100% inappropriate for any normal occasion…but so cute! (This is the downside of working at a teen gossip website – after looking at photos of celebs under 25 all day, I end up buying stuff like this. Thanks Miley and Selena!)

While I was out shopping, I noticed that England is having a very patriotic moment right now. It’s not surprising – they have the London Olympics, Wimbledon, the Jubilee, and the Euro Cup going on this summer. Well, England was still in the Euro when I was there.

All the pubs were decorated with English and British flags of all sizes. The T.V. showed constant ads for British sporting events, and the shops were crammed full of special Union Jack-patterned stuff.

The best bit was the security guy in the airport who I chatted to. (Being away from the English language makes me awfully conversational). It was, of course, a rainy English summer day, so he said “I hope you’re going somewhere warm!” I replied “Yes, Barcelona.”

“Ah, well, just remember, we’ve reserved the sun for August, September and October so make sure to give it us back!”

Still, the rainy English summers have one major upside – the country is so green! Here are some gorgeous funky flowers growing in my auntie’s garden. Maybe England should keep the rain longer based on these results.

Currently reading: Just finished The Cat’s Table by Michael Ondaajte  – the story wasn’t especially interesting, but it was so beautifully written.

Currently listening to: “505” by the Arctic Monkeys, because their singer talks exactly like my grandma! He’s from the same place, so they have the same distinctive accent.