9 Reasons Why Spain Has the Best Euro 2012 Fans 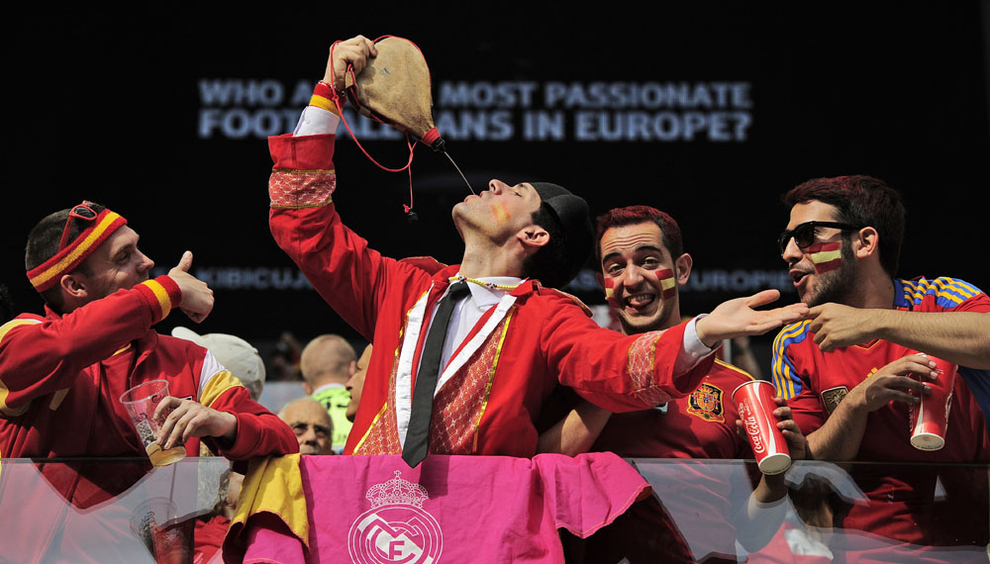 Tomorrow is the big Euro 2012 final, and it could be a historical moment for Spain – La Roja could potentially be the first team ever to win the Euro Cup, World Cup, and then the Euro Cup again (they won the Euro in 2008, and the World Cup in 2010).  The kick-off for the big Spain-Italy match is at 20:45 Spain time Sunday night!

Los españoles are getting pretty excited about the Euro (and even some of the Catalans too), so they’ve had some pretty wild fan moments so far in the Euro 2012.

Here are 9 reasons why you should support La Furia Roja and their crazy fans tomorrow night :

Don’t miss the guy in the flamenco dress on the left. Photo credit: Peter Morrison, AP

“Did I copy you? What?? No! I swear, I just threw this on this morning.” Photo via Pichippo

Photo Credit: AP via the Telegraph

Still not convinced to support La Roja in tomorrow’s final? Remember, Spain has this gorgeous guy (I like to think of him as Mr. Shakira):

The “Gracias, Sara” joke, which exaggerated her occasional not-so-clever football commentary, exploded all over Twitter. (“Sara, what’s the status of our players?” “Hey there! I’m using Whatsapp” or “Sara, how do you see Torres?” “From far away.” )

This week, Sara made it way too easy for fans in this interview with Andrés Iniesta after the Spain-Portugal match:

Sara Carbonero: “How did the penalties go? Did you think about taking one? Did you ask [coach Vicente] Del Bosque? Did he decide? Would you have liked to have taken a penalty today?”

Andrés Iniesta (surprised): “Yes, uh, well,…actually I did take one, the second one….”

And if you’re still not convinced to support Spain against Italy, just look at this video.

There are so many potential street parties in Spain that could happen if they beat Italy tomorrow – overblown patriotism, good-looking futbolistas, dancing pulpos and all!  Think of the fiesta, think of La Roja.