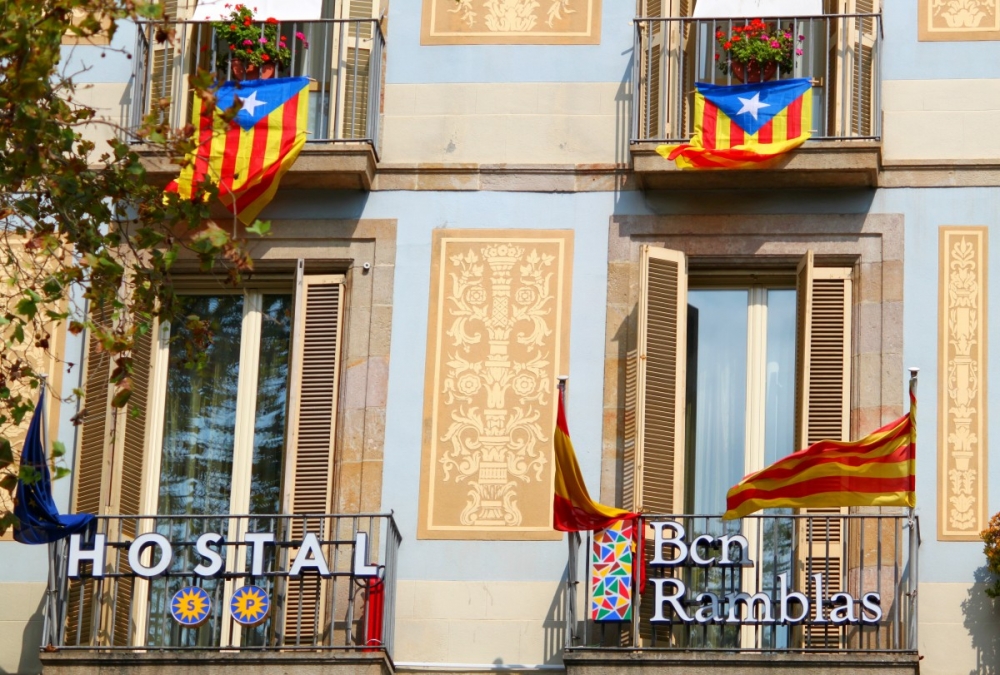 Yesterday Catalonia celebrated a special holiday – La Diada Nacional de Cataluyna, which falls on September 11th.  All the streets were decked out in full Catalan regalia, and filled to the brim with marches and parades. About 1.5 million people were out  in Barcelona to declare their Catalan pride.

This is a fancy hotel on Las Ramblas, which got into the spirit of things early and put the bright flags up all weekend.

There are a few different Catalan flags. The most common ones are the plain striped one (the regional flag), the one with the blue triangle and white star (independence flags), and another triangle-star version in yellow (socialist independence).

The holiday commemorates the Siege of Barcelona, when the Catalans lost the battle for Barcelona to the Spanish, and along with it Catalan independence. This happened back in 1714, but the battle for Catalan identity still goes on today. The Catalans are typically very proud of their individual identity, and don’t like to be associated with Spain or Spanish things – after all, as they like to graffiti all over the region, Catalonia Is Not Spain.

Yesterday, 1.5 million people marched in Barcelona for Catalan independence. One of the biggest issues for the Catalans is that they pay more in taxes than other regions of Spain as it’s the richest region in the country. But they get less money back, because it goes to poorer regions in Spain.

Add in the crisis and you’ve got a recipe for a lot of angry people.They’ve currently demanded a €5 billion bailout from the government in Madrid to help with their debt. Some believe that’s how much they’re owed from overpaying in taxes.