What to do in Barcelona At Christmas Time 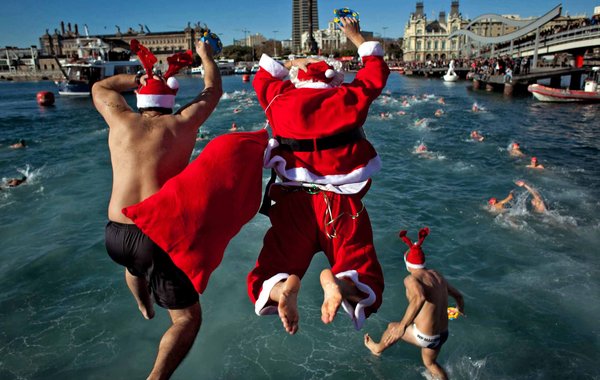 I’ve had a busy month getting in to the holiday spirit in Barcelona! There are lots of fun things to do in the city as it celebrates the holidays, though the celebrations are a bit different from they are back home. So here’s my roundup of what to do in Barcelona at Christmas.

Barcelona’s Christmas lights are a world away from the lovable but tacky snowmen and reindeer at my local mall. These lights have serious style and fit in perfectly with the city’s glamorous but funky architecture. They’re everywhere in the city center, from Las Ramblas to Portal d’Angel and Passeig de Gràcia. I even got lights on my street this year!

Go shopping at the Christmas market in front of the cathedral

Every year, the Fira de Santa Llúcia sets up in front of the Catedral de Barcelona and sells Christmas-related things.

You can buy decorations, like Christmas lights or the special Catalan figurine, the Tió de Nadal (The Christmas Log) or the Caga Tió (The Shitting Log). He gets ‘fed’ something every night, and then on Christmas he ‘poos’ out all his presents. How does this happen? Everybody hits him with a stick, of course.

The Tió is so popular that he’s even on Barcelona’s town hall’s official Christmas posters this year. Here is his official song, as sung by Norah Jones and with accompanying sounds:

The Caganer is another lovely poo-related figurine. These are squatting, pooing figurines, usually of famous people, who are added as a finishing touch to the Nativity scene.

If you would prefer something slightly less scatological as a Christmas souvenir, the market also sells handmade gifts, traditional foods, and more, um, internationally recognized forms of Christmas decorations.

Have a look at the city’s Nativity scene

Nativity scene displays are huge in Spain! People have them in their houses, and cities put up special ones. Barcelona’s is in Plaça Sant Jaume, and this year it has a twist – the scenes are inside of four-foot tall Christmas ornaments. ‘Pessebre’ is the Catalan word for this.

Some restaurants do special Christmas menus del dia in the weeks leading up to Christmas, so you can try lots of specialties that way.

One of the most popular holiday foods is galets, which is a special type of pasta shaped like snail shells. The traditional Christmas soup is galets stuffed with ground beef or lamb, vegetables, chicken broth, sometimes eggs, and a bit of jamón serrano, of course! HERE’s a great recipe, though it is in Spanish.

They’re so popular that the city has giant galet Christmas lights on the Rambla de Catalunya. They’re so big you can climb inside them (not that I’ve tried or anything…)

Canelones stuffed with meat and topped with creamy cheese sauce are also a favorite Christmas dish.

And for dessert, try some special holiday turrón. This isn’t specific to Catalunya, but it’s delicious anyway! It gets translated as nougat, but you can find turrón in tons of flavors, from crema catalana to chocolate to honey and nuts.

Don’t forget to have a glass or two (or three!) of cava with your Christmassy food.

On Christmas Day, put on your Santa hat and jump into the harbor for a quick swim.

Or if you’re feeling really festive, wear an entire Santa suit for your swim!

Watch the light show at the Torre Agbar

Barcelona has been obsessed with light shows projected onto important buildings this year, and they’re really impressive. Go check out the Christmas special at the tower fondly known by a variety of phallic nicknames.

See the Christmas show at the Font Màgica (the Magic Fountain)

I love the Font Màgica, which is a big fountain at the base of Montjuïc in front of the Palau Nacional. It does light and water shows to music, and they run a Christmas special show. The lights are holiday-colored, and the music runs from traditional Catalan Christmas tunes to Mariah Carey’s cheesy but wonderful “All I Want for Christmas.” It’s every Friday and Saturday at 7, 7:30, 8, and 8:30, as well as on Christmas Eve and Christmas Day.

At the beginning of November, chestnut-selling stands pop up all over the city. The little metal shacks emit rich smells and clouds of smoke. The castanyers also sell roasted sweet potatoes (or maybe yams, I don’t know what the difference is). Either way, it’s all delicious!

There’s a big open-air rink in the center of the city that’s always bustling. It pumps out pop and electronic music. Check out their official site at BarGelona (‘gel’ is Catalan for ‘ice’ – clever, eh?). It’s €7 for half an hour, or €9 for an hour.

I’m not sure why, but the Christmas lottery is a really big deal here. All my Spanish friends have bought tickets, and my office has a pooled ticket. It’s advertised all over the metro every few minutes. Hey, you might win big!

Don’t forget to celebrate all the way until January 6th!

The holidays are longer in Spain, so there’s an endless stream of parties from mid-December to early January. Fiesta on!

This isn’t strictly related to the holidays, but you should definitely go see the World Press Photo exhibition at the CCCB. It’s a show of all the best photojournalism of the year, and it’s truly stunning work. It’s probably the best museum exhibition I’ve ever been to.

Does anyone else know of Christmas traditions in Barcelona I’ve missed? How does your city celebrate the holidays?