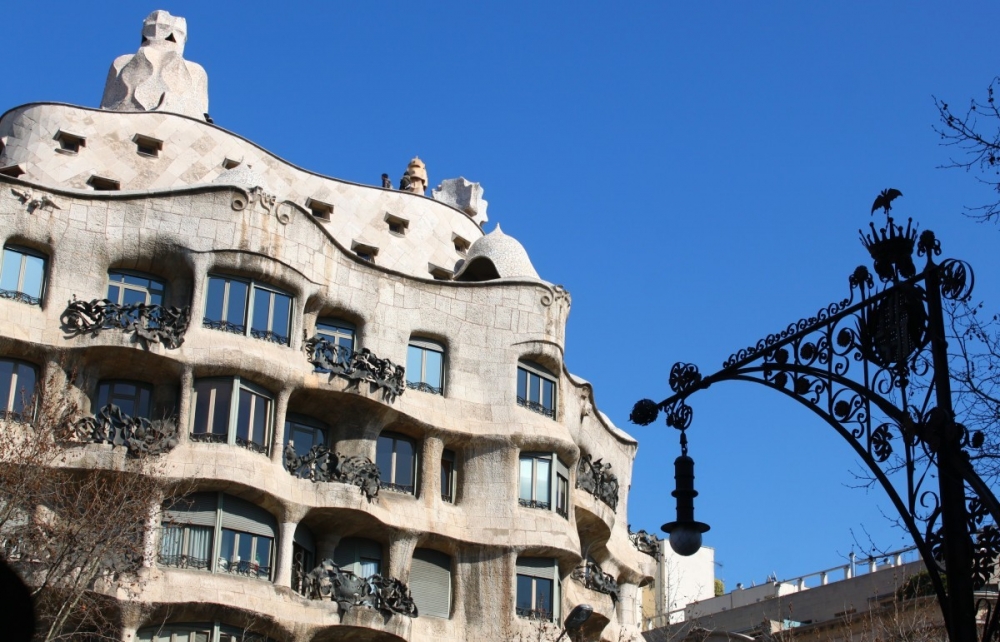 A little while ago, Cat from Sunshine and Siestas posted this close-up shot of a hidden secret on Sevilla’s street lamps. I loved it, and got inspired to take a closer look at Barcelona’s lamps…and there were hidden secrets there too.

Like the Sevilla ones, they featured a symbol of the city, the Barcelona coat of arms. But there was an interesting detail on the modernist street lamps on Passeig de Gràcia – a Barcelona bat perched on top.

Normally that alone wouldn’t have caught my attention, but I thought of a photo I’d snapped during my first-ever visit to Barcelona. On the Arc de Triomf, I caught a glimpse of this little Barcelona bat perched on there:

So then I started thinking. If two important architectural things had bats on them, I was pretty sure that meant there was something special about bats and Barcelona. Turns out, there is!

There are two parts to the secret – a historical reason and a legend. The bat comes from the dragon used as a symbol for the kings of Aragon (dragons are another big symbol in Barcelona).

But the legend is a little more fun. A bat supposedly helped Jaume I of Aragon win a big battle to add Valencia to his kingdom.  Apparently, a prophet told Jaume that he wouldn’t win while the city’s owner’s pet bat flew around at night. One night, the bat was so fascinated by the shiny dragon on Jaume’s helmet that he stayed in, and the next day Jaume won the battle for Valencia.

As far as legends go, that one just made me laugh. Aren’t bats blind anyway?

Anyway, Valencia is another region of Spain that uses Catalan, so it’s a nod to Catalan culture. Barcelona used the bat in their coat of arms, but for whatever reason it was taken off around the beginning of the 20th century. It was also on the first shield for FC Barcelona, but they don’t have it anymore either.  The bat is still on the coat of arms for lots of Catalan-speaking cities in Spain.

Still, even though it’s no longer an official symbol, there are lots of hidden bats around Barcelona in the buildings. So far, I’ve found them on the lamps on Passeig de Gràcia, the Mercat de Sant Antoni, the Arc de Triomf, and the Boqueria. I’ve also seen photos of a few on the Mercat de Sants, Gaudí’s Palau Güell, and a few little gargoyle-style bats dotted around.

I bike up and down Passeig de Gràcia every day, so now I make sure to look out for those little bats. I hadn’t ever spotted them but now that I know they’re there, I like looking at them as I go downhill. I always smile, because it feels like a secret between me and the city.

Here are the bats I found while out and about yesterday. Some of them are a little hard to see because they’re so small! You can click on any one of the pictures to see the gallery.

(P.S. If you’re really interested in learning more about the history of bats as symbols, here’s my source. It’s in Spanish and very (very) comprehensive.)