Las Fallas: The Loudest Party I’ve Ever Been To 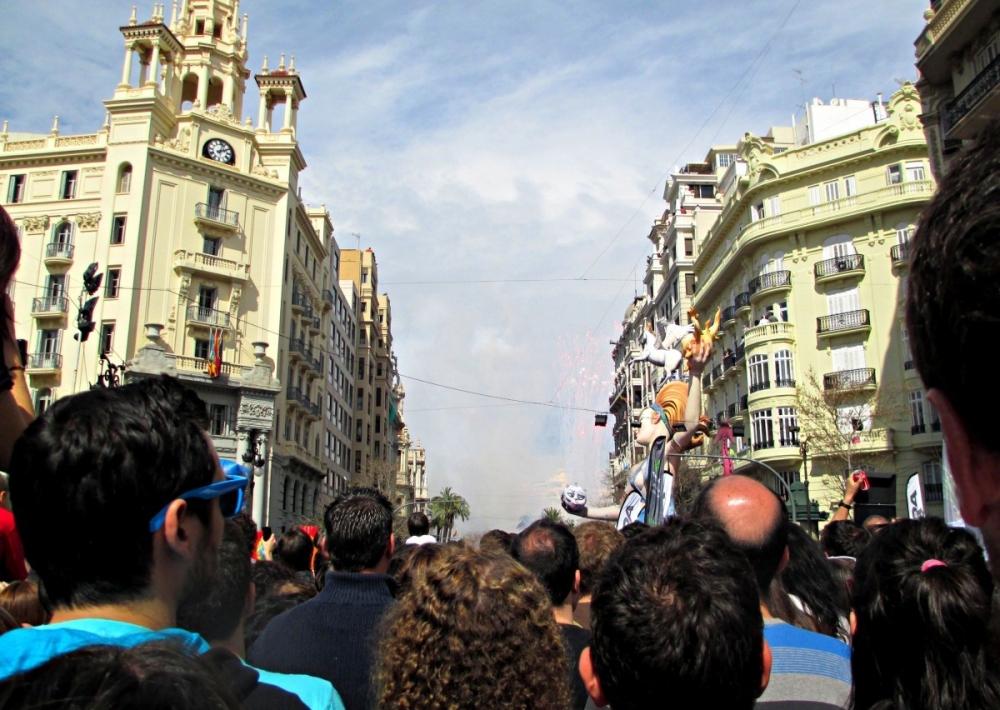 More people than will physically fit in the streets are trying to jam their way into the packed crowd at Las Fallas. Like it or not, you can feel everybody’s breath around you on your shoulders, hair. The combination of the midday sun and the sheer amount of people is creating a suffocating heat. A helicopter is thudding above the crowds, circling the Plaza Mayor.

You can feel the anticipation in the pulsing crowd. Everyone is pushing further and further into the main square to catch a glimpse of the frenzy that’s coming soon. The sun is climbing higher and higher into the sky. People start shifting, trying to remove jackets and layers without losing their coveted spot, while hopeful watchers in the back try to might take advantage of the distraction.

Everybody tenses and crushes forward. The thudding helicopter circles lower and louder. I don’t even know what’s coming next, but I do know that I want to see it, and I want the best view possible. I lost most of my friends in the fray fifteen minutes ago, but now that it’s here all my anxious thoughts have been pushed out by my excitement. Whatever “it” is.

The square shakes with the first explosion. A firework shrieks into the air, leaving behind a trail of dirty white smoke. You can just barely see the red sparks shooting into the blue skies.

My whole body vibrates with the pounding explosions. This is a celebration you can physically feel in your entire body.

By now, the whole place is filled with heavy clouds of smoke. Each rumbling blast sends a shiver through your body, shaking you to your core.

Suddenly, everything goes quiet. There’s a collective intake of breath. Is this it?

An explosion goes off in the distance.

Now they’re shooting fireworks off the other side of the plaza. There’s a roar of new bangs before a wailing trail of red and gold explosions bursts high in the sky. You can’t see anything through the dusty clouds. It looks like windy days in the desert when the air blows all the dirt high into the sky.

Just when I thought it couldn’t get any louder, the entire Plaza Mayor is filled with surround-sound explosions, clouds of smoke, and occasional bursts of glittery fireworks in the middle.

It builds up into a frenzy, so loud you can barely hear yourself think. There’s one final, glorious explosion of noise and excitement and bangs….

And then, suddenly, it’s all over.

People slowly start to cheer and clap (“Is that it?”), the volume swelling to fill the square with an explosion of voices. Then, as quickly as the Mascletà began, the crowd suddenly whirls outwards in search of the next stage of the festival.

Las Fallas has officially started for the day.