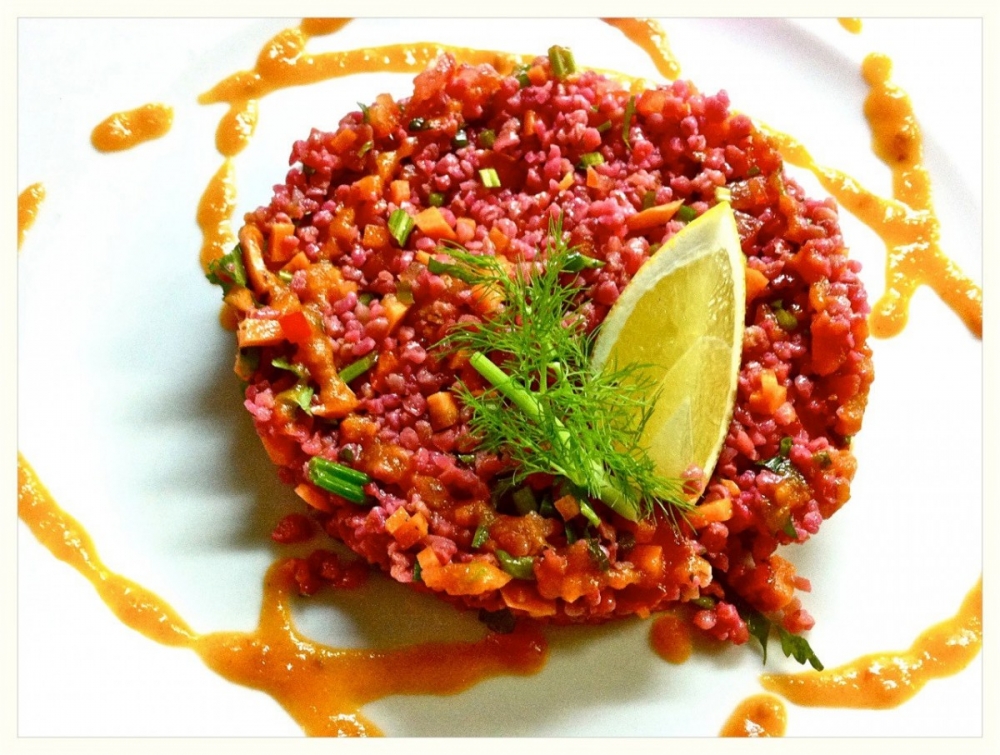 Note: Sadly, this place has shut down! 🙁

“You went to a vegan restaurant??” my dad sputtered when I told him what I’d had for lunch. “Are you sure you’re feeling okay? How did you end up there?”

I had two more surprises in store. 1) I went there on purpose.  2) I actually really, really enjoyed it. (This is coming from the girl who subscribes heavily to the “I love animals. They’re delicious” school of thought.)

But it’s hard not to enjoy your meal when the food is as good as it is at Juicy Jones in Barcelona. The funky vegan restaurant is just steps away from Las Ramblas, and it offers a fresh, healthy, and cheap option. Or I think it must have been healthy – I’m still suspicious that it tasted too good to have been good for you too! It’s definitely one of the top choices for vegan food in Barcelona.

In a country where dishes with ham and tuna count as “vegetarian” options, imagine trying to explain the concept of vegans. I’ve attempted it a few times; one person responded “So they can still eat fish and chicken, right?” Another said “Well, I’m basically vegan. I eat jamón and mostly vegetables and fish.” Basically, a lot of people just don’t quite get it.

So to have a successful vegan restaurant in Spain, I’m betting your food has got to be pretty damn tasty. After all, you’ve got to convert all the jamón-worshippers to back away from the pig products and embrace weird-sounding dishes like “seitan” and “bulgur”. Luckily, Juicy Jones does great food!

There are actually two locations (one in the Gótico, one in the Raval). The interior is decorated with rainbow graffiti-style paintings splattered all over the walls. And why’s it called Juicy Jones? Because they do excellent fresh-squeezed juices, like pear, grape, and orange blends, and almond milk shakes with fresh pineapple and papaya. Smoothies are one of the #1 things I miss about California, so I love stopping by Juicy Jones for a fresh juice fix.

It was only recently that I tried the food as well though. I went with a friend, and we both ordered the menú del día. Here’s some of the delicious food they serve:

To start, she had a salad with lots of fresh, crunchy veggies and topped with avocado. I had very garlicky hummus served with carrot sticks. Both were really tasty, and the hummus was surprisingly filling. They also brought us a small basket of wheat bread, which had more substance than the normal white baguette you get at Spanish restaurants.

For the second plate, she tried their famous thali plate, which is a selection of 3 Indian-style curries served with rice and chapatis. (The curries change by day). I tried two of hers and they were both seriously delicious.

I picked the seitan with potatoes and peppers with lemon sauce, because I just wasn’t sure what it was and wanted to know. The waitress described it as being “meat-like”, which left me unsure, as meat substitutes can be pretty awful. But it was pleasantly surprising; I actually liked it so much I ate the whole thing. I’m afraid I played the “Oh, I’ll just have one more bite…” game until it was all gone. The vegetables were nice too, and the lemony sauce was delicious and added a tangy zing to the dish.

To finish, we both had vegan carrot cake, which was light and fluffy. The slice of orange served with it was a nice touch too. We weren’t really hungry any more, but it was so yummy! I’d originally anticipated buying juice to take home after my lunch; afterwards, I was far too stuffed to even think about more food-related stuff.  All those chickpeas, seitan, and veggies definitely hit the spot.

So if you’re looking for good vegetarian or vegan restaurants in Barcelona, try Juicy Jones! If you can convince even this carnivore to willingly eat vegan food and enjoy it, you know it’s a good spot.  Both locations are the same style and in the same area, so there are no major differences. They do breakfasts, brunches, juices, teas, lunches, and dinners.

Two notes though: as a caffeine-starved friend was aghast to find out one morning, they don’t do coffee! I also read a lot of complaints about how slow the service is online, but I didn’t have any problems with it. Ah well, I suppose one place can’t have everything.

Here’s all the practical information about Juicy Jones:

Where: Carrer de Cardenal Casañas, 7 and Carrer de l’Hospital, 74. (Both are close to metro stop Liceu).

Have you ever eaten at a vegan restaurant? What was it like? Also, do you know of any other good Barcelona vegan food (or vegetarian!) that I should try?