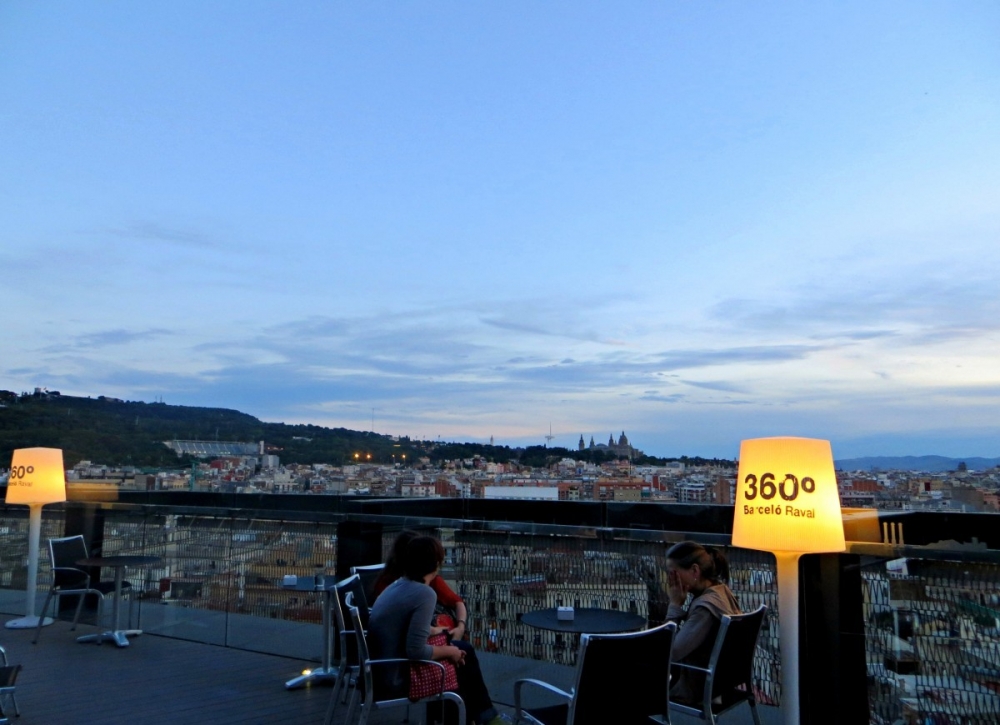 Last week, I featured the amazing Alaire terrace bar at the Hotel Condes de Barcelona, and now I’m back with another fab hotel terrace bar – the Hotel Barceló’s 360º bar.

Now, I’m not typically the type of traveler to go visit hotels, but I recently discovered that you can walk into any hotel and check out their rooftop terraces (assuming they have one). For the price of a drink, you can enjoy stunning 360° views of Barcelona in a super chill environment.

The Hotel 360º is definitely my favorite place to get the best views of Barcelona. As you might have guessed from the clever name, it offers 360º views of the entire city. The circular hotel is topped off with a chic round open-air terrace, complete with tables and chairs, a pool, and free telescopes to check out the city in detail.

This isn’t a place you might end up at on a typical visit to Barcelona. It’s right in the middle of the Rambla del Raval, the notoriously sketchy neighborhood in downtown Barcelona. It’s quite a scruffy neighborhood with a bad reputation, and there aren’t too many tourist attractions here. But the reputation is (in my humble opinion) exaggerated.

The neighborhood is sandwiched in between the Gothic quarter and Montjuïc, extending all the way down to the port. That means you get fabulous views of the Mediterranean, the towers of all the Gothic churches, the sun setting over the Olympic Stadium, the Sagrada Familia, and the hills surrounding Barcelona to the west. . Last time I was there, a film crew was using it to shoot panoramas of Barcelona at sunset.

The hotel pipes gentle chill-out music as you make your way around the terrace. The glass barrier has a useful trick – and no, I don’t just mean stopping you from falling off! It has white silhouettes of the largest buildings you can see, along with what each of them are. It’s a great way to get your bearings and a feel for where things are in Barcelona.

You can choose from beers, wines, and cavas starting from about €5, plus basic cocktails and non-alcoholic drinks. If you want to follow it up with another activity, check out the nearby Bar Marsella, which was allegedly Hemingway’s #1 haunt in Barcelona.

The terrace is open in the “summer” season, which means from May to October.

Check back next week for more of my picks for spending summer in Barcelona!

P.S. I will be writing about my recent trip to the Basque Country soon, but I don’t really fancy sitting inside and blogging when there are beaches, rebajas (sales), and all-night summer parties to be enjoyed! I love summer.