The Most Surprising Place I’ve Ever Been in Spain 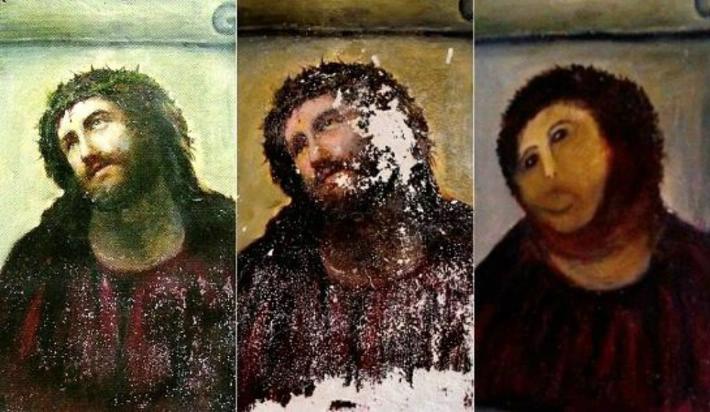 Sometimes, traveling to a new place is exactly what you expected. My uncle came back from a trip to San Francisco grinning that it was “exactly like it is on the telly.” Sometimes they’re extremely disappointing (am I the only one who didn’t really like Paris?) But the best kind of travel is when it surprises you, and a little town called Borja, Spain is definitely the most surprising place I’ve traveled to so far.

Borja – does the name sound familiar? Well, think back about a year ago. Do you remember any odd news coming out of Spain? Anything involving art at all? And Jesus? Yep, this week it’s time to celebrate my favorite piece of art’s birthday:

This painting swept all over Spain about a year ago. If you don’t know the back story, it’s an old fresco called “Ecce Homo” – Behold the Man –  painted on a small church in Borja, a little town near Zaragoza. As the years went by, the fresco started not to look so great, so a little old lady named Cecilia Gimenez offered to restore it.

Well, let’s just say it didn’t go exactly according to plan (to say the least). Initial reactions were that a vandal had destroyed it.

Cecilia protested that it had just gotten “out of hand” and, my personal favorite, that “they didn’t let me finish”. In between bursts of laughter, I did feel bad for her. She was obviously quite upset about the notoriety her artwork was getting, and felt bad about ruining the painting.

“It looks nicer like this!”, says a meme version of Cecilia.

That still didn’t stop me from nearly falling out of my chair every time I got a new glimpse at the restoration. And again when I found out it had been nicknamed “Ecce Mono” – Behold the Monkey.

Fast-forward eight months. When my parents said they were coming to visit this June, we decided we were going to take a road trip from Barcelona to the Basque Country. We toyed with the idea of stopping off in Zaragoza, and then I suddenly connected the dots – the Ecce Mono was in Zaragoza, so we skipped the main city and decided a little visit to Borja’s Beast Jesus would be a much more satisfying road stop.

Basically, we planned on seeing the beastly wonder for ourselves in person, laughing ourselves silly, and having a little something before finishing up back in Barcelona. We definitely weren’t expecting what was coming next.

One of the many Ecce Mono comics: “I told you, if you want to go out partying you have to take your brother.” “But dad, they’re all going to make fun of me!” “Introduce me to Mary.”

We drove up the windy, deserted hills to the Santuario de Misericordia, parked, and marched in to the church. “Where are you from?” asked the woman at the entrance offering us the guest book. “California – it’s a little far away!”, I told her.

She smiled, raised an eyebrow and said “You’re not the first,”  pointing to a world map with pins from all the visitors from around the world. “Not the first” was an understatement (over 70,000 people have gone to see him in the past year):

Adding my mark to the map.

I gleefully raced around the corner to finally see Beast Jesus in person, and was surprised again. The painting is hilarious, of course, and a truly wonderful thing to see in person, but what really got me was how gorgeous the sanctuary’s church is. The high, white ceilings were topped off with a  pale blue dome, and there were lots of pretty pieces of glittering artwork. It felt airy, light, and nothing like the often grim Spanish churches filled with dark wood and gruesome depictions of Jesus (just brilliant ones these days).

On our way out, we asked the same woman a bunch of questions about the sanctuary. Thrilled by our interest, she took us around the old kitchen, showing us all kinds of old-fashioned stoves and cooking devices, traditional local ceramics, and even the chickens. She also explained a bit of the history – it had been a place where people with lung illnesses came to stay, because the dry air at higher altitudes was easier for them to breathe.

Afterwards, she gave us free run of the sanctuary to go upstairs and see the rest of it. You can actually rent out the rooms and stay there for a summer. They’re quite lovely and have incredible views of the sweeping countryside, only occasionally interrupted by a handful of houses or a church tower.

To finish our visit, we made our way outside to a bar terrace to admire the views and enjoy the warm June breeze. It was the perfect stop on a road trip – a little weird and wacky, and also surprisingly beautiful. As we were leaving, my dad said, “Actually, I think that was my favorite place we’ve been on this trip, weirdly enough.” Yep, he liked tiny Borja over glamorous San Sebastián, Bilbao, and Barcelona.

Cecilia’s story has a happy ending too. She got her own art show in the village, and an international art competition in her name dedicated to original interpretations of the Ecce Homo. She’s also setting up a merchandise deal where she’ll get 49% of the profits (the rest will go to the city council).

And for the record, I was definitely not above indulging in the real reason we stopped in Borja in the first place:

(By the way it got approximately a million more “likes” on Facebook than any profile pictures I thought were flattering and/or charming).

What’s the most surprising place you’ve ever traveled? Would you go on a “pilgrimage” to see Beast Jesus in person?