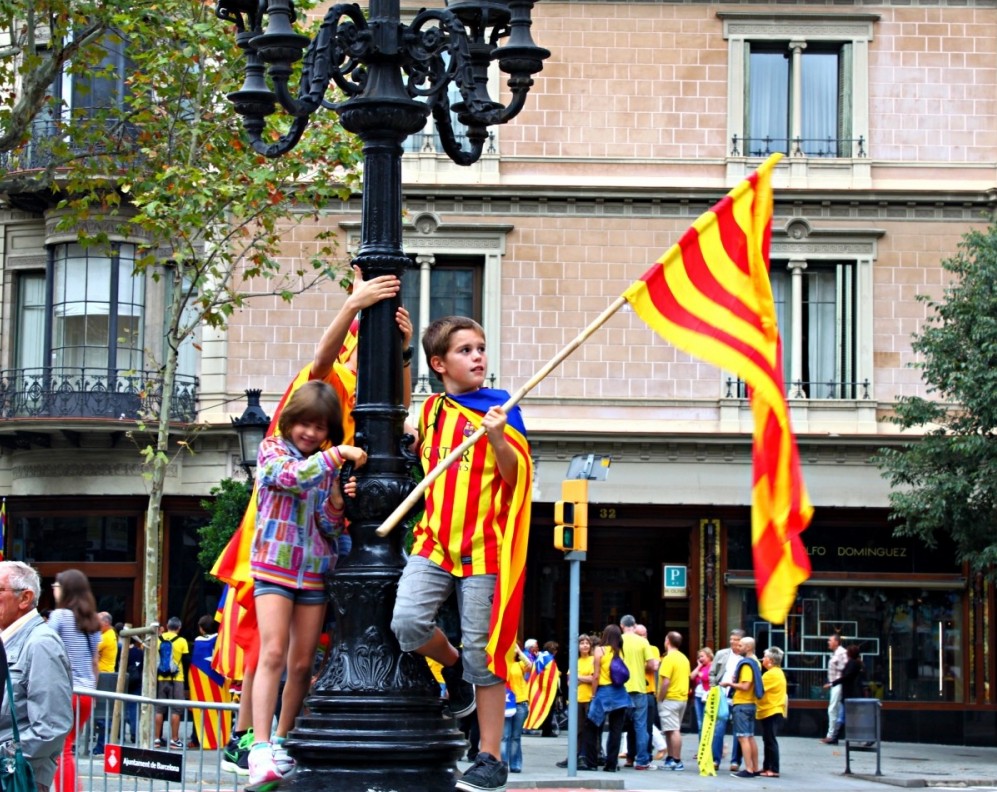 I’m a full day late on my usual Where in Spain Wednesday post, but I promise I have a good reason. You see, yesterday was September 11, the Diada Nacional de Catalunya (the National Day of Catalonia), and this year, they marked the occasion with a Catalan human chain.

I had the day off work, so naturally, I headed out for a beer to celebrate, with the intention of writing afterwards. One little beer turned into more drinks and an all-night foam party until 5 a.m. Oops! I’m still puzzled as to how I managed it, but hey, these things happen…especially in Barcelona.

Anyway, yesterday was a big day in Catalunya. September 11th is the day they remember the defeat of the Catalan troops fighting on the Habsburgs’ side to the Bourbons on September 11, 1714 – in a way marking the day Catalonia fell under Spain’s control (well, kind of sort of, anyway).

Last year they had a record-breaking independence march on Barcelona.  This year they created a Catalan human chain called the Via Catalana. It started in the Catalan regions of France and ending in the north of Valencia, linking hands at 17:14 across the whole region. This is a shot of some young independentistas watching the Via Catalana in Barcelona.

Catalan identity and politics are complicated, with a long history. I’m no expert by any means, but here’s a quick summary of what’s going on. A recent editorial by Catalonian president Artur Mas in the New York Times discusses Catalan identity’s roots through the centuries, mentioning key historical moments that molded this identity, like Spanish dictator Franco’s anti-Catalan laws.

He also explains the current financial issues further shaping the debate. Essentially, Catalans believe they pay more to the central Spanish government and receive less than their due. Now, they’re pushing for a referendum to vote on the future of Catalonia.

Whatever you think of Catalan politics, acknowledging and respecting the sentiment that “Catalonia is not Spain” is important to understanding the region, the people, and their history…even if you don’t agree with it.

For more reading on Catalan politics (which is a complex, thorny topic I didn’t even scratch the surface of in this little post):

(P.S. apologize for being slow on blogging lately – a change to a self-hosted blog and a slew of real-life visitors have made it tough. It’s back to business now!)