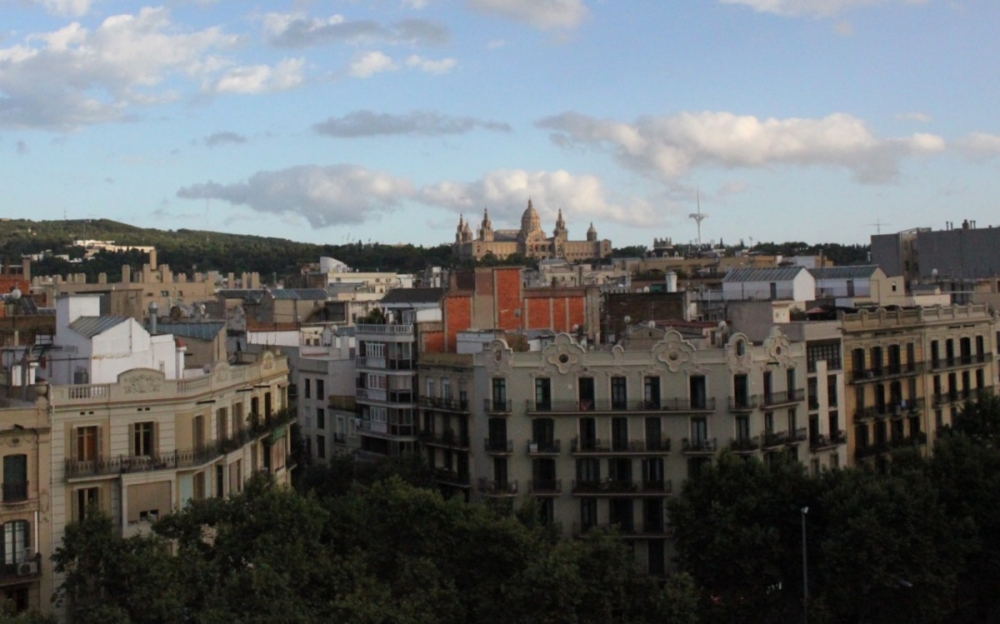 Living abroad means you’re always stuck between two places. There are people, places, and things I love in both places, and there’s some stuff I prefer in one country over the other. I just spent two weeks at home in California, and of course, there were lots of things I missed about Barcelona. (Now that I’m back, I’m missing California things. I can never win!) Here are seven of the things I’ve missed about my adopted city.

Every time I’m in the city center of Barcelona, I pick up on this vibe I’m obsessed with. It’s got the big city feel mixed with a laid-back attitude. California has the laid-back attitude, but I always miss the pace in Barcelona, or as the Spanish say, ‘el feeling‘ (one of my new favorite Spanish-adopted English words).

Totally superficial, but it had to be on here. It’s not that California’s ugly by any means, but I’m still charmed by all the very old things in Barcelona, plus all the crazy modernist stuff. At my old job, I biked past the Sagrada Familia every day; now, I get to check out vibrant street art on medieval churches on the way to work. Sorry, Riv, you just can’t compete with that.

Living in Europe means there are tons of easy, cheap travel opportunities to go to other countries. This isn’t to say that there aren’t great travel opportunities in California. Going to San Francisco from my hometown is a short flight away , but it’s not quite the same as having a short flight and being in a totally different country. Back home, there’s no Ryanair, so I often drive if I want to travel. You can drive all day and still be in California!

It’s also easier to travel around without a car in Spain, which I love. Plus, because all the sights are new and strange to me, they automatically get extra “cool” points simply for being completely novel (just like Californian sights would for many Spanish people).

OK, this isn’t just about the actual parties (although Barcelona has some spectacular ones). It’s more about the going out lifestyle that I have access to here. If I go out back home, A) it involves driving, which leads to B) people aren’t out in the street wandering around as much. The driving is a hassle (public transportation is way better when drinking and/or late night are involved), and when there’s nobody walking around on the streets it makes a city feel, well, dead. (I’m looking at you, Los Angeles).

Also, the schedule drives me nuts. Last time I did dinner and a night out, we ate around 6, then it was straight to a bar, straight to a club, and straight to bed at the “late” hour of 2 a.m. I was sputtering with indignation when I got turfed out so early! In Barcelona, I rarely meet up with my friends before 9 p.m., so it feels way less rushed. And you have time for the essential disco-nap.

OK, this club isn’t actually in Barcelona (it’s in Ibiza), but it’s my only decent club picture!

Now onto social life part 2: my friends are here! I moved to Barcelona two weeks after graduating college, so all of my new friends are here. Combine that with what’s going on back in California – my college friends have scattered, and none  of my friends growing up have stayed in our hometown. It’s always great to see them but tough to get everyone in the same place at the same time (especially if I’m busy at home as I was on my last trip). My social life is definitely not the same as it used to be back home.

Also a picture from Ibiza.

2) You can do more for less money

Having talked to a bunch of friends who have lived in other major cities, we agree that in Barcelona, you can have a nice lifestyle for not much money. Renting a room, buying groceries, and going out are not expensive compare to other places. The wages are much lower than in California here, but I can afford a lot more.

Of course, not everything is cheaper here, but my lifestyle in Barcelona is definitely more affordable than it would be in, say, San Francisco. I’m not rich by any means, but I have the freedom to do whatever I want, and that, like those cheesy commercials say, is priceless.

This may seem like a weird one to pick as the top thing that I miss, but I really do get frustrated at the lack of public transportation in California! It hands-down the thing I get most annoyed with and feel that it is most outrageous not to have in California.

With things like my friends or a different cultural lifestyle, I miss them, but it’s easy to understand why they can’t exist in California. Public transportation is not one of those things.

Southern California public transportation is slow and poorly connected, which often makes it impossible for me to use. #2, #4, and #5 would all be improved with better public transportation. In Barcelona, I can get around by bus, train, metro, night bus, the other train system, or community bikes. In California, I struggle to find a train that can get me in and out of L.A. outside of a commuter schedule (it’s only an hour away on the train, tops). There’s not even great transport to and from the airport inside of L.A. itself – a place lots of people need transportation to and from. Arrgh!

By Ripetto (Own work) [CC-BY-3.0 (http://creativecommons.org/licenses/by/3.0)], via Wikimedia Commons

OK,  to be fair, let’s move on to a few things I miss about California when I’m in Barcelona. Of course, friends and family are the biggest one, but I wanted to talk about some things that aren’t quite as obvious.

This is pretty general, and I’m not just talking about physically comfortable. At home I am more physically comfortable, because things like carpet seem to be nearly nonexistent in Spain. But I’m also more comfortable in a non-physical sense simply because I don’t stick out when I walk down the street in California. I hadn’t experienced that prior to moving to Spain and I hadn’t realized how uncomfortable it can be to permanently stick out. Some days, I just want to be completely ignored – not the foreigner, the object of interest.

The language also plays into being comfortable. I speak good Spanish, but it’s never going to be as natural and fluid as English is for me.

I am not ashamed to admit it: I am basically the world’s worst cook. I hardly ever cook anything beyond pasta, and when I do it inevitably turns out oddly. I can just about do pasta right, although I have managed to set my pasta on fire while it was in a pan of water AND managed to fail at boiling water (it exploded and I’m still not sure how). When I’m at home, somebody else takes care of all that nasty cooking business. I am a fan – not only is the result not blackened and smoldering, but it actually tastes good too!

(This one I could probably improve upon with some time, admittedly.)

Delicious Mexican food at home that I did not cook myself.

OK, I always complain about the weather! Growing up in California meant I was rarely exposed to any of the not-so-nice elements (wind, cold, and even rain are all rarities. Snow does not exist, except when relegated to appropriate mountainous areas, as it should be). Sure, it gets cold at night, but the days are almost always sunny. Having the sun around just about every day means the cold doesn’t stick as much.

Autumn is definitely here in Barcelona, and the days are noticeably gloomier, chillier, and darker much earlier than they were just a few weeks ago. Winter is a physically painful experience for me, and I’m already dreading it.

However, FYI, my whingeing was justified last year when a guy from the Netherlands (a place we can probably agree there is proper cold), said it felt even colder in Barcelona than Amsterdam. HA! Actually, wait, what am I laughing for? That cold is quickly on its way. Sad days.

What kinds of things do you miss from home when you’re traveling?