The #1 Thing I Like Better About Spain than California 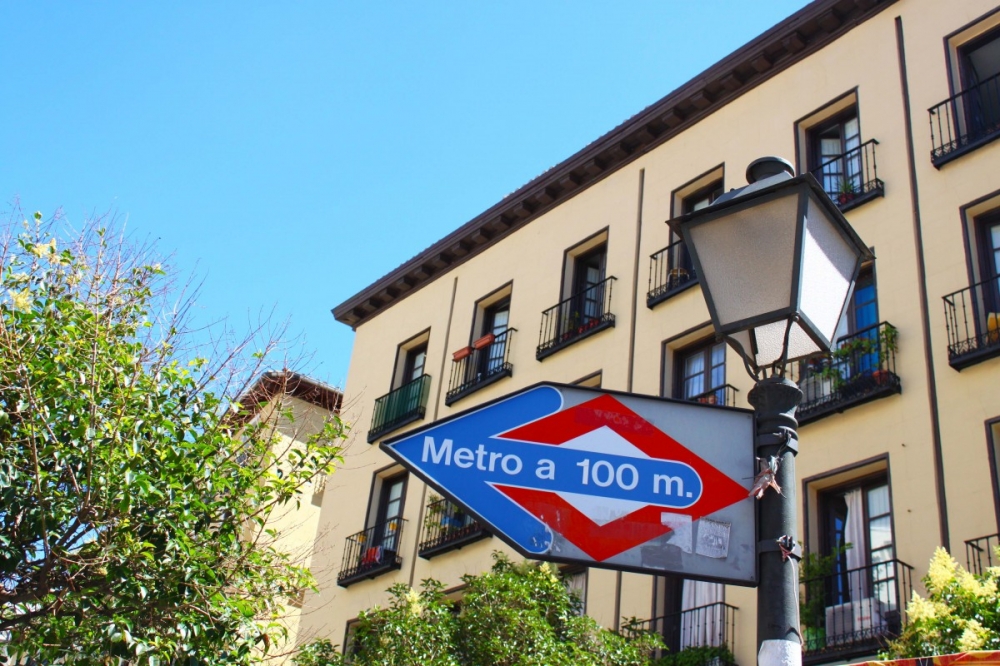 (Or, if you’re going to San Francisco, don’t even bother with flowers in your hair…because you may rip them out in frustration when dealing with public transportation.)

However. That comes with one major caveat. There is one thing that I like better about Spain than California, no further questions, and that’s public transportation.

This is a rather snappy metro sign in Madrid guiding you to the very nearby metro station. If only things were the same back home! I’m afraid this week’s Where in Spain Thursday has turned into a little rant.

While I was home in California over the holidays, I was exasperated by the lack of efficient public transportation options available. I’m not even talking about getting from my suburban hometown into L.A.  this time; I’m talking about within the cities themselves. It took me almost THREE hours to get to the airport in San Francisco from my friend’s apartment in The Haight. (Granted, I blindly followed Google Maps and had a few long changes between trains, but in the best case scenario I still think it would have taken a good two hours).

And it wasn’t just the time it took that drove me up the wall. Oh no, I’m just getting started. Here’s a rundown of my battles with San Francisco’s public transportation system.

I’ve spent most of my life in California and have traveled alone to lots of places (including San Francisco a few times), but I had a really tough time figuring out where I needed to be on the public transportation because there was practically NO signposting. Seriously, how hard would it be to put signs on the station platforms telling you, for instance, which train is coming on that track? Or maybe which direction the train is running in?

I had to ask for assistance at every station. At one point, I got on a Muni train, only to have the conductor bellow over the sound system, “GET OFF THE TRAIN. OTHER SIDE OF THE PLATFORM. GET OFF THE TRAIN!”

Seriously, who can figure out that to buy a BART ticket you need to put your money in FIRST and gradually decrease the amount by 5¢ by pressing a button repeatedly. How do you find out the actual amount you need? Oh, consult the teeny-tiny chart of stations and fares stuck on a random corner in the station (if you’re lucky, it will be on the machine). Can’t understand these odd machines? You can’t buy a ticket from a real human being – you can just ask them to help you decode this relic from who-knows-what-year.

Sooo…how am I supposed to add a fare to a ticket if I don’t HAVE a ticket? Confusing instructions abound on the BART. (Image via the SF Gate).

The (lack of) cleanliness

The BART I caught to the airport was, in short, disgusting. The windows boasted signs that the car was “proudly maintained” by some company, but that maintenance must be pretty far down on their to-do list. The seats sagged down about six inches when you sat on them, the furniture and carpet were stained with huge dark gray pools of…something, it smelled funky, and to top it all off I had the luxury of sharing my compartment with a drunk threatening to vomit at every turn of the track. I don’t know why they don’t rip out the carpet if it’s so hard to keep clean.

Their surefire way to encourage fare-jumpers

This is really silly, but I could NOT figure out how to pay on the Muni. I saw lots of signs threatening to fine you for not paying, but only when I got off did I realize you had to go up to the driver (who, um, I guess took breaks at stoplights?) and pay. There weren’t signs telling you where or how to pay, nor were there any signs or ticket machines on the station platforms.  Still, I’m not going to complain too much about this one as I got a free ride!

AND I didn’t even have to squat down awkwardly like this woman! (Image via NY Daily News)

And of course, there could always be more extensive public transportation, though I suppose that’s asking rather a lot. San Francisco is one of the best cities for public transportation in the United States, but I honestly find it to be not very user-friendly, complicated, and slow. That’s one of my frequent frustrations with California – the public transportation is just not as good as it is in cities I’ve been to in Spain. And it’s a shame, because small changes like signposting stuff could go a long way.

I’m absolutely spoiled with great public transportation in Barcelona, and it just takes one battle with California’s public transportation to appreciate it all over again. Yeah, I might be cross that the ticket prices went up for the New Year, but I’m so thankful that I have access to a system with trains, a subway, buses, night buses, and even bikes  available for public use. For me, the pull of the open road pales in comparison to the magic of a little train that whizzes you around hidden passageways under a city, then tidily pops you out at your destination a few minutes later. Or even a bus that still runs every 20 minutes at 4 in the morning.

P.S. This was supposed to be up yesterday, like usual, but for some reason WordPress wasn’t letting me upload pictures! Hmph.