The Barcelona Cathedral of LIES! 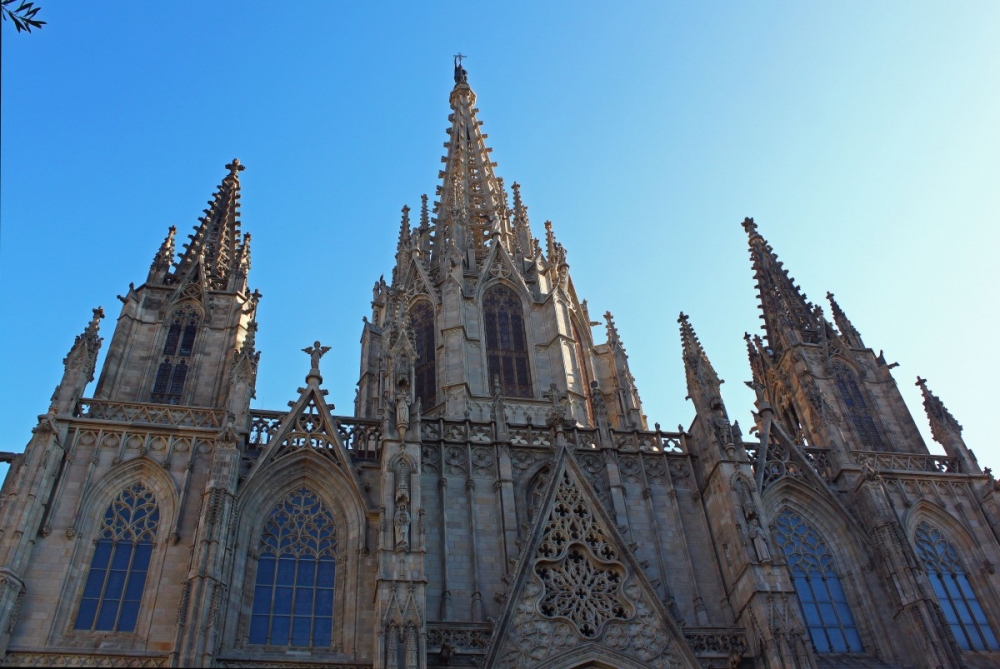 (And no, this has nothing to do with getting ripped off on Las Ramblas).

Imagine that your favorite person in the whole wide world had lied to you. Even worse, you had to find out from someone else. Even WORSE, they’d been lying for ages. That’s pretty much what the Barcelona Cathedral has been doing for years.

OK, so I am being a bit dramatic. But it is true that the Barcelona Cathedral is not exactly as it seems, and it starts with the name of the neighborhood it’s in – the Gothic Quarter.

There’s no question that the cathedral is very beautiful, and when you pop out of one of the little stone streets in the Gothic Quarter to the wide-open plaza in front of it is definitely a “wow” moment. The inside is lined with intensely colored stained glass windows, and its cloister is a calming space in the middle of the busy city center.

That’s all good and well…but if you thought that was all Gothic Barcelona, you’re mistaken, just like I was until I was recently mildly outraged to discover otherwise.

Now, the inside is actually Gothic. But the outside? This beautiful façade with its intricate stonework and detailed towers wasn’t even finished until 1913, when the middle spire was completed. Why was it added? Apparently it was in the original designs from the 15th century, and it also had the added bonus of jazzing up an otherwise fairly plain-looking church.

And to ruin all your Barcelona Gothic fun even more, here’s another little fact. A lot of the iconic “Gothic” architecture in the Barri Gòtic (you know, the postcard stuff) was actually added in the early 20th century to make the city more interesting-looking for visitors. Shocking!

So when I see graffiti saying that Barcelona is turning into a theme park for tourists built on capitalist greed, I laugh. It’s nothing new. It’s been happily, shamelessly gussying itself up for tourists for about a century.

Did you know that Barcelona’s Gothic Quarter isn’t all actually Gothic?