Going to a Country You Know Practically Nothing About 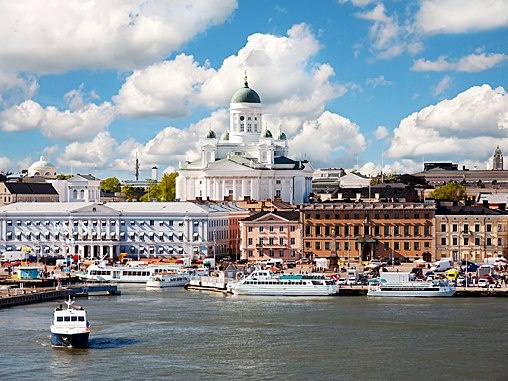 Tomorrow morning I’m jetting off to exciting Helsinki, Finland! But apart from a general impression of the Nordic countries as being very chic and cool (in both senses of the word), I don’t actually know very much about Finland…er, at all!

In light of my very limited knowledge, I thought it would be fun to blog about what I’m expecting Helsinki to be like, and then compare it to my actual experience after the trip. I may laugh at my blissful ignorance or smile very smugly at my obvious ability to predict the future.

(I believe it may end up being the first.)

Anyway, based on some cursory research and a few stereotypes I have of the Nordic countries (I don’t think I even have a specific Finnish stereotype – just goes to show how little I know about the country!), here’s what I’m expecting to see on my weekend trip to Helsinki.

A sleek and stylish city

My general impression of Finland is that it’s filled with extremely stylish cities that are very livable and filled with equally stylish people dressed in endlessly casual-cool black outfits.

This stereotype may not be true, but I am definitely expecting a city that is clean, tidy, and generally runs well.

Enjoying such a sleek city may come with a high price tag like its nearby neighbor Oslo, so I’m working on how to visit on a budget. I’m confident it can be done!

The chance to eat some interesting animals (sorry, Rudolph).

From what I’ve read up on about Finnish cuisine, there may be the chance to try quite a few interesting foods that are totally foreign to my palate as well. By reading up, I mean consulting my favorite time-waster, Buzzfeed, and a bunch of blogs. Anyway, it’s looking like lots of salmon, meat, potatoes, pastries, and berries are on the menu – all good news for me.

In nearby Oslo, Norway, I was thrilled at the chance to get to eat an elk burger. I didn’t actually get to eat elk in burger form, instead going for a delicious creamy stew. (I was very torn between elk stew or whale cutlets, but the elk came with mashed potatoes, always a deal breaker for me!). I’m guessing Finnish food will be different from Norwegian food, but will still have some similarities. Maybe reindeer in Helsinki is just as tasty as elk in Oslo!

I’m definitely looking forward to the food tour I’ll be doing this weekend, and hoping to try cloudberries (are they as charming as they sound?), as well as a traditional Finnish stew or soup.

Will Rudolph himself make it on to my plate? I’ll alert you if there are any suspicious red round things served as garnishes on my dinner plate.

On the note of Helsinki seeming like a cool place, I’m also expecting there to be an artsy vibe in the city. I’ve internet-explored places like a church built into a rock (Temppeliaukio Church) and a giant 24-ton monument to Jean Sibelius, a Finnish composer, that you can shout into to create your own, er, “music” (the Sibelius Monument).

I’ve also read quite a bit about the Finnish love of coffee, so my dream would be to come across a chic little café with a fun design element, then perhaps pop into a museum or two.

Natural beauty and lots of sunlight

Because of the harsh winters in Finland, I’m hoping that going in September means there will be lots of people enjoying the outdoor space in the city while they still can. It’s going to get nearly 14 of sunlight every day this weekend, with the sun not setting until around 8:30, so there is certainly lots of time to be outside! Got to soak up those last days of summer while they last.

I’m also excited to visit the little islands that are close to the city, like Suomenlinna with its UNESCO World Heritage fortress. Cities near the water with lots of green spaces are always nice and relaxing to visit, as you can appreciate both the urban and natural elements of a country. Perhaps that’s what will await me in Helsinki?

Check out this cool video that shows the difference between summer and winter in Finland. It’s crazy! I can’t imagine living somewhere like that:

I’m not going to lie; the number one thing I’ve heard about Finland is that is has some pretty spectacular saunas. I’m pretty excited to go and test one for myself, as I’ve never actually been in a sauna! My gym does have a steam room, which the closest I’ve come. Actually, sometimes I pretend I’m going to the gym and then just lie in the jacuzzi and sauna for two hours, so I think I will be rather well-suited to the sauna lifestyle.

The airport in Helsinki even has a sauna. How cool is that?

Plus, just because, here are some fun facts I’ve learned about Helsinki in my initial research:

Bonus: In 2010, Newsweek declared Finland the best country in the whole world!

So, while you’re all reading this, I may already be snacking on reindeer jerky in a sauna or something. I’ll let you know how things actually turn out when I get back!

Have you ever been to a place you knew almost nothing about? If you’ve ever been to Helsinki, is there anything I should do/see/eat while I’m there?

P.S.  I’ll be going to the Finnish capital with Visit Helsinki and Vueling for a busy weekend of sightseeing.