My Love-Hate Relationship with the Festa Major de Gràcia 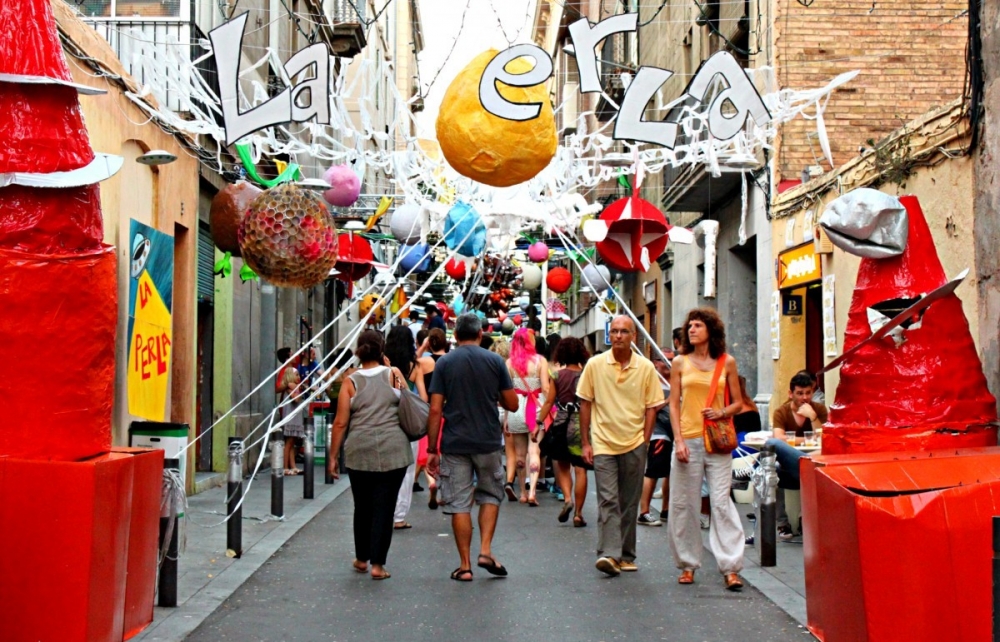 Last summer, I moved into the lovely Gràcia neighborhood in Barcelona, and was super stoked to find a great apartment right in the heart of the barrio near one of the main squares.

My favorite square in Gràcia

One of the neighborhood’s highlights is enjoying the wild Festa Major de Gràcia, an amazing summer street party that takes over the neighborhood for a week. But I quickly came to discover that being right in the thick of things definitely has its upsides…and its downsides.

This year, I flew back from a trip home to California just in time for the festivities to kick off. But it turned out I may not have made the right decision.

LOVE: Getting to help out

During the festival last year, I wandered around one afternoon to snap some photos and stumbled upon a sign asking for help. So I did! It was a fun way to sit down, get to know some of my new neighbors, and get to really see what goes into creating the amazing street decorations.

I was lent a hand on Carrer Mozart, where all the decorations were made from recycled or reused material. But don’t think these were some bizarre Etsy knockoffs; here’s the type of thing they come up with for the festival:

HATE: All the extra traffic involved with setting up the festival.

There were round-the-clock delivery trucks depositing thousands of cases of drinks, food, and electronic and lighting equipment all week. After they were done, the street cleaners came to do an extra-thorough job of the party-stricken streets (for that, I am eternally grateful). The noise made it really tough to sleep, and I’m a super heavy sleeper.

This year, I was struggling with jet lag, which made the noise even more difficult to done with.

Also, I was very cross that they took away my Bicing station (the community bike program) for the festival. It made getting everywhere a pain, especially because the metro was twice as packed as usual with people coming up to the neighborhood.

Not my precious Bicing!

LOVE: Going downstairs and having the party at my front door.

If you know me, you know I can’t say no to a good party. I LOVED the feeling of having a huge street party right at my fingertips, almost quite literally. I also liked finally getting to be one of those cool people who gets to stand on the good balconies to snap photos! I’m always jealous of photographers who manage to get up onto a balcony with a good perspective, and this year I had a decent one. Win!

I took this from my bedroom window.

HATE: Going downstairs and having the port-a-potties at my front door.

This year and last year, there was a porta-a-potty right under my kitchen window. Um, gross. I guess the only positive is I no longer needed to go upstairs to relieve myself, but that is a very small silver lining in a very large, stormy cloud.

Plus, a lot of guys thought it was hilarious to piss on the street directly in front of the toilet. At four in the morning. On a weeknight. While shouting. Ha. Ha.

LOVE: Not having an after-party walk home.

I love when the party is right outside your door, because you can just gently tip into bed without thinking too much about it. No waiting for the metro, no long walks, and no uphill bike rides – just a little stroll, and then it’s bedtime! This worked pretty well for me.

HATE: Being right in the middle of everyone else’s after-party walk home.

Yep, that includes the guys who saw me sitting on my balcony for some fresh air and came up with a creative nickname (“Juliet! Juliet!”).

And the ones that peed on my neighbors’ building, despite the fact that there was a port-a-potty less than 20 meters away from them.

And everyone who stopped for a kebab and a shout. Living near a kebab shop is great for my party nights, but there should be a law that it closes down as soon as I’ve had my kebab for the night (only joking…mostly).

LOVE: Being right in the middle of things

I love being at a good party where the music is pounding and it’s packed to the gills. I like the buzz of big cities and big parties, so having a little nap oasis in the middle of the party is pretty much my dream situation. Love!

HATE: Being right in the middle of things

“Pounding music” and “packed to the gills” make for a nice nightclub, but are less appetizing in a neighborhood. It’s nice to be able to be right in the center of the coolest summer party in Barcelona, but after an entire week of festivities, I was awfully ready for the party to be over (and that’s not something I usually say).

Between the explosions of the correfocs, the non-stop music, the drunken hordes, and the trash littered all over, I was relieved to get a good night’s sleep and relax when the festival ended on the 21st.

Oh, and did I mention the exploding fireworks started at 7:45 some mornings? After hearing party noise until 5 a.m., I was NOT happy to be woken up with explosions happening under my window!

The reason this photo is so blue? It’s because the sun hasn’t properly risen yet. And that stick is about to make some serious noise.

All in all, I always have a good time at the Festa Major de Gràcia, though it was definitely different as a resident of the actual neighborhood. But I also understood why my roommates often decide to leave the city the week of the fiesta!

Fun as a non-stop party is, once you have no choice but to stay at the fiesta, it becomes a little less fun (I’ve been offered “political asylum” at a friend’s house, just in case!). I always get excited about the festival, but I may be investing in some heavy-duty earplugs for the next year to prepare for it.

What’s the best summer festival in your city? Do you think you could put up with a basically 24-hour party in your neighborhood?