Why You Should Visit La Pedrera ASAP 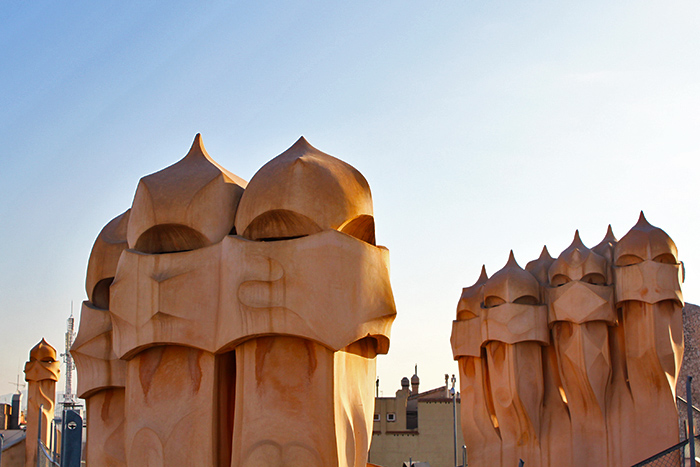 You’re not really supposed to play favorites, right? But I must confess – I do have a favorite Gaudí house to visit. I say house, because it’s hard to say that anything tops the Sagrada Familia in terms of a must-see, as the church is just so bizarre that it’s in a category of its own. So let’s just stick to houses.

And one of the house-related questions I get a lot from visitors is which Gaudí house should I visit – Casa Batlló or La Pedrera/Casa Milà? Both are totally unique in terms of style, have similarly-priced entry fees, are on the same street, and host fun events like concerts. However, I think one is much more fun to enter, and that’s La Pedrera…even though Casa Batlló is my favorite from the outside.

Well, first, people actually still live here. Isn’t that crazy to think about? I still can’t quite believe that a building as unusual as this is somebody’s house. When La Pedrera was turned into a tourist attraction, some families chose to stay in their apartments.

Of course, you can’t go into their apartments and have a nosey round. But you can do the next-best thing, which is see rooms done up like they would have been when their former residents still lived there. It’s fascinating to see how people used the spaces for everyday living.

Lots of La Pedrera’s features are totally practical, by the way. You might not realize it from the whimsical look of the place (I certainly didn’t), but it’s all been carefully planned out so that it’s functional as well as beautiful. Things like the door handles are ergonomically designed to be pleasing to the touch. There are special blinds on the windows so residents can let fresh air in without letting the sun in, too.

Those iconic swirling towers? They disguise the chimneys, staircases, and air vents. That’s also why the rooftop has that wavy form (and all the stairs, security fences, and warnings so visitors don’t slip!).

One of the towers houses another little surprise; it’s covered in dark green tiles. The “tiles” are actually pieces of smashed cava bottles, said to be the empty bottles from the building’s inauguration party.

Speaking of the roof, that’s my #1 reason La Pedrera is better bang for your buck than Casa Batlló. Casa Batlló is really, really spectacular as well, but the rooftop of La Pedrera is just unbeatable. Those weird, twisting towers, the pretty sherbet orange color that changes with the sun, the expansive views of Passeig de Gràcia and downtown Barcelona…yeah, I could have spent hours up there.