Who Knew You Could Go Wine Tasting in a Castle? 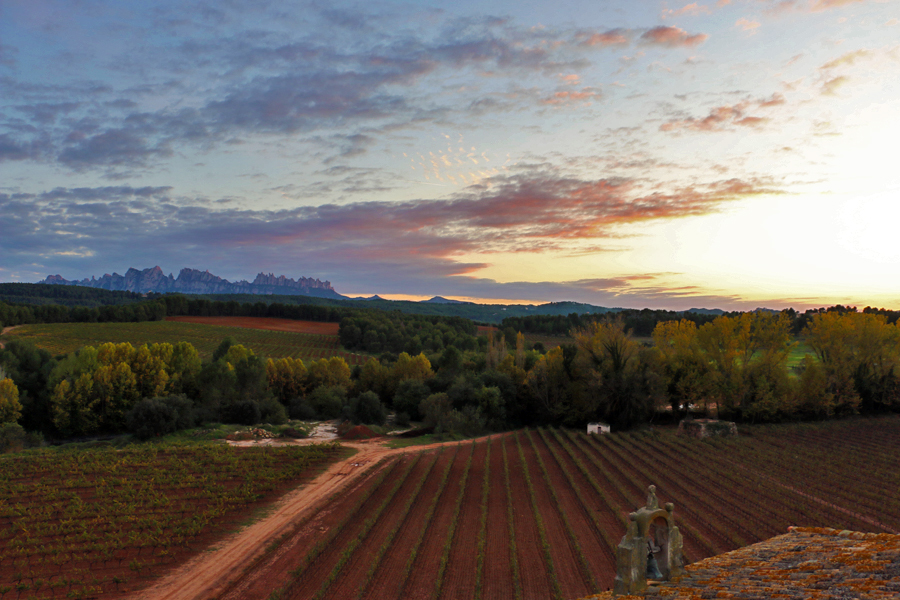 I’m pretty new to the arena of wine tasting, having only been for the first time last year, but I’m quickly enjoying exploring the world of the demon grape. After trying out some wineries in California, it was time to try things over in Europe – where the weather might be a little cooler, but there are castles to make up for it!

Last week, I hung out with winetourismspain to try some of the best wine in Catalonia with a wine tour from Barcelona. Now, the Catalan capital usually gets all the attention as far as Catalonia goes, but the region is packed full of wonderful, smaller places to visit. We were driven out about an hour away from Barcelona to get to know both the history and the wines of Catalonia – a pretty wonderful combination.

Now, I’m not usually one to start drinking at 10 a.m. in the morning, but it turns out that a cava cheers is quite a nice way to start off a Saturday morning. We clinked glasses full of sparkly white cava (the Reserva de la Finca Brut Nature 2008, to be exact) at Finca Ca n’Estella, accompanied by a plate of sugary homemade cookies straight from the kitchen downstairs, baked that morning by the owner.

Right from the start with those cookies, it was clear that this is a very family oriented winery. It’s actually a house, as well a winery. From a personalized tour of the kitchen, to family photographs from through the years decorating the living room (which we got to see too), you can see how much love the family has poured into their wine for generations.

Every year, our guide told us, the close-knit team all gets together to sample the wines and determine the best ones. They also let us taste a special wine that she and her father made together to celebrate the life of her grandfather.

That was pretty special. You could tell that this was more than just wine; to use a clichéd phrase, it’s a labor of love – there’s no other way to describe it. It’s definitely personal here.

But just because the vino comes from a small winery with a family focus doesn’t mean it’s not excellent. Actually, their wine is award-winning. It’s won 10 European awards since 2002, and it’s the only winery in Spain with two gold medals. Their chardonnay has been declared the best in the world. And, it’s all organic wine – one way to tell is that you can hear birds softly chirping over the vineyards, according to our guide.

I must admit, I’m no expert in wine tasting (yet!), but this stuff was exceptionally nice. (If you’re curious, by the way, the wines they produce are Clots dels Oms and the caves are Rabetllat and Vidal).

There were two parts of the tour that I thought were extra-interesting. First, we did a wine-tasting in a small candlelit room in near-darkness, to better appreciate the flavors and textures. This was actually pretty cool, and helped you use your senses better. I’d never tasted wine in the dark before, nor had I ever seen a bottle of wine opened horizontally.

The second was learning about a little secret this house holds. They had a special staircase with a tiny hole in one of the steps so you could see who was coming. At night, somebody stood guard with a rifle to shoot if unexpected visitors arrived.

But, as much as I was enjoying my time at the Finca Ca N’Estella, it was time to move on, this time to a completely different style of wine tasting at Oller del Mas.

(Oh, and this is where that castle I mentioned comes into play).

Fortunately, before we hit the bottles again, we took a relaxing break to have a 3-course traditional local lunch on the grounds (er, with more wine). Really, after a big lunch and a morning of wine tasting, I was pretty ready to nod off in the garden with views of Montserrat, but we kept going – and I was glad we did.

Oller del Mas, like Finca Ca N’Estella, is also on the grounds of a property belonging to the same family for generations and generations. But the approach to wine here was decidedly more high-tech.

Right next to the vineyards, you’ll find a production area filled with gleaming silver machines, ready to select the very best of the best. They have a special selection machine here that’s one of just 40 in the world (there are 4 in Spain).

When it’s ready to be stored, the wine gets piped across the fields and right into the castle. Yes, the castle! It turns out castles are actually really good for storing wine (who knew?). The chilly castle floors create a perfect place to store food and wine. That’s why the family lived on the higher floors, getting up with the help of a ladder.

Even though they don’t use ladders anymore, there are still some traditions that the family keeps…like traveling separately, just in case. The castle’s exterior, however, isn’t exactly traditional. The original was destroyed by Napoleon’s troops, so this is just a replica.

But back to the wine. I learned a few new fun facts about wine here, like how much the type of wood for the barrel its stored in affects the taste, and why rose bushes are planted every two rows in the vineyard (hint: it’s a similar idea to the canary in a coal mine). I also picked up a fun trick to test the color of a wine by using a napkin to catch the reflections of the wine’s colors.

I ended up being very surprised by the wine here. We were told to try and sort the wine into one of four flavor categories – fruit, mineral, vegetable, or animal. Somebody suggested a wine had a fungus-like smell, which was true. The guide described it as like walking through the forest on a rainy day, which was both nicer-sounding and also true.

Even though the smell wasn’t what I found most appealing, the wine had a totally different flavor once you actually tasted it. If you’d told me at the beginning of the day, wine described as “fungus-like” would have been my favorite tipple of the day, I would have laughed and laughed – but it’s true! It was actually like nothing I’d tasted before, in a good way.

After learning more about how to taste and appreciate wine, there was one more surprise in store – we got to go up the castle’s highest tower to take in the spectacular views of the surrounding countryside at sunset, overlooked by the spiky peaks of Montserrat in the distance.

So which one of these two wineries did I like better? Actually, I can’t decide! They were both so different that it was hard to compare. Getting such a personal experience of wine at the Finca Ca N’Estella was very special; wine-tasting in a castle with amazing views in the distance at Oller del Mas was just as special in a different way. Either way, I enjoyed spending time at both, and I especially enjoyed sampling all their delicious wines, of course!

Which wine tasting experience would you rather have – a personal one at Finca Ca N’Estella, or one in a castle at Oller del Mas?

Thanks very much to winetourismspain for inviting me on the lovely tour, and Castlexperience for providing a great time. I was invited in exchange for a post, but all opinions are completely my own – as always! (Also, a special thanks to Juan from Castlexperience for completely saving my day in the morning!)