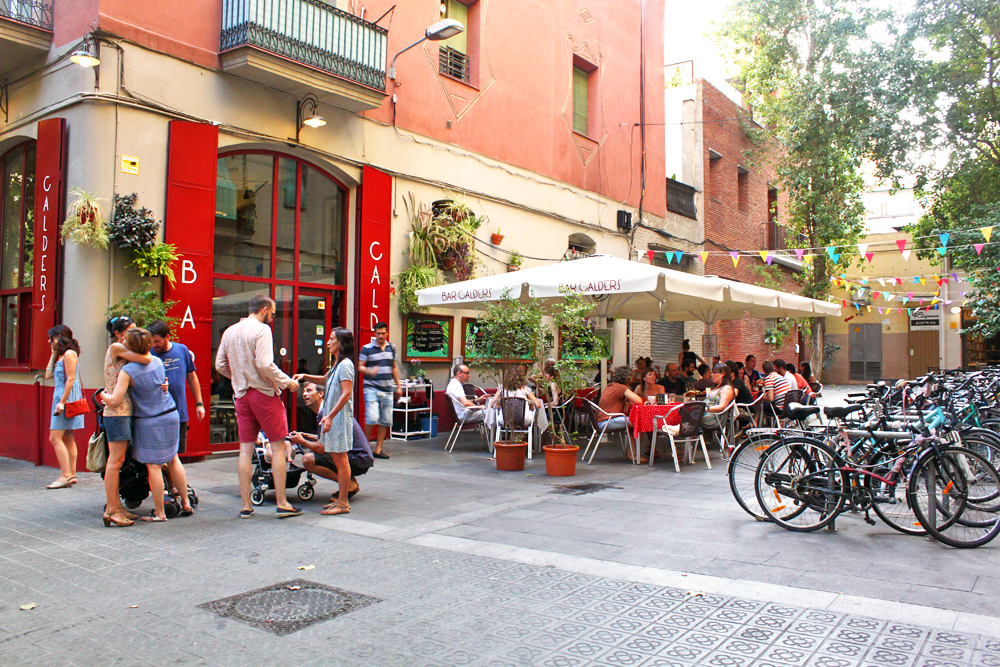 Part of the fun of living in a big city is watching trends come and go. In Barcelona, different neighbourhoods cycle in and out of style and cycle. From when I got here just four years ago, the vibe of the districts has changed a bit. Each district has its own distinct feel – which is part of what I love about the city – and they often reflect the trends happening all across town.

So where do Barna’s hip young things choose to live?

You’ve got hipster classic Gràcia, which used to be its own separate village from Barcelona but now mixes tradition and trendiness together like nobody’s business.

Then there’s the Raval, a district known for its huge immigrant population and slightly edgier feel. Friends who live there still get asked how they do it – even though it’s not really that dangerous anymore.

You’ll also find them in the Born, which has all the old-world charm of the Gothic quarter but way fewer of the tourist traps.

But now, there’s a newer neighbourhood on the scene – Sant Antoni.

Sant Antoni is tiny triangle-shaped slice of a district arranged around the market with the same name. It slots in between the Raval, the newer Eixample district, and Poble Sec, the neighbourhood pushed up against the hillside of Montjuïc.

It’s got the tall, wide buildings of the Eixample but is right next door to the tiny winding streets of the oldest parts of the city centre, so if you live here, you get the benefits of a much more modern apartment while still being right next to all of the interesting old stuff in the centre.

You might be wondering – what even IS a yuccie? It stands for Young Urban Creative, and it was invented by David Infante in a hugely popular Mashable post titled “The hipster is dead, and you might not like who comes next”.

Yuccies are the new version of the hipster, but with a few differences. Here’s how Infante describes the yuccie:

“I’m a 26-year-old writer who lives in a gentrifying neighbourhood in Brooklyn. I’m a straight white man with a single-speed bike and a mustache. I studied liberal arts in college, and I have ideas about stuff, you guys.”

Basically, yuccies are hipsters, but more techy and more open about wanting to make money off of their “passion projects” – a cross between a creative hipster and a successful yuppie who’s big on what Infante calls “creative entitlement.”

You can take their quiz to find out of if you might be a yuccie. For the record, it said I am “quite a bit of a yuccie.”

I’m not surprised – I do online freelance work in a creative field, live in a hipster neighbourhood in a big city, and love my regular yoga sessions. And all my friends seem to be doing the same thing. (Sorry).

So, what’s a Young Urban Creative to do? Get thyself to Sant Antoni as soon a possible!

If you walked through Sant Antoni on a lazy Sunday afternoon, you might be forgiven for thinking that it looked like quite a boring place. All the shop windows are tightly pulled shut – and the ones you can see tend to be mixture of sketchy shops, outlet joints, and really old-fashioned clothing stores.

There aren’t very many people in the street, and it looks more residential and sleepy than anything else.

But then suddenly, you might come across a street that changes your mind entirely. Spoiler alert: this will probably be the achingly hip Carrer Parlament.

There are artistic centres selling all kinds of artwork that’s been almost clinically studied to be as stylish as possible. You can shop for eco-friendly tea or buy a selection of organic groceries.

Street art pieces are subtle and understated, and would look just as cool on a slouchy white t-shirt as they do on the walls. Shop windows are covered in pretty white hand-painted slogans declaring things like “Hello, summer!” or announcements for upcoming art shows.

And then there are huge garage-style spaces whose brick walls have been cleaned up and strung up with minimalist white lights, and where instead of cars, there are now tidy tables and chairs in pop-art colours.

Even on one of Barcelona’s stickiest summer afternoons, the people sitting on the outside terraces have carefully planned out their outfits to make a clear style statement.

They’ll occasionally pull out a fancy device (that definitely cost more than your rent) to check their e-mail or share their latest purposefully-filtered Instagram snaps.

Hipsters? Not quite. This is Barcelona’s yuccie haven.

And, in fitting yuccie form, I’ll be working with Skyscanner on a live Periscope stream from Sant Antoni this Friday from 5-6 p.m. Barcelona time! Make sure to keep your eyes peeled for specific information on my Facebook page.

20 cities for Yuccies around the world (Skyscanner)