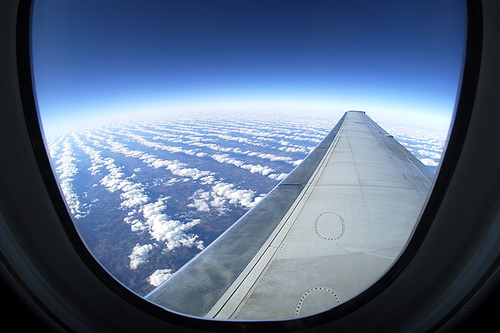 Urgh, jet lag…if you’ve never experienced it, lucky you. However, for anybody who’s ever traveled a long distance, it’s pretty likely that you’ve felt jet-lagged at some point or another. Even though I travel a lot, it’s never easy to get over that weird, out of it feeling.

(Want to skip ahead to the tips for ways to beat jet lag? Just look for another bolded section)

California is NINE hours behind Spain, so it’s always a battle for me. Coming this way (west to east) is supposed to be harder than east to west – I totally agree.

Last time I came back, it took me three weeks to get over jet lag. My first day back at work, I felt so terrible I accidentally regurgitated my airline meals all over the office. I regularly have pretty bad headaches and just feel weird. It’s almost like a full-body hangover.

This time, it’s not much better. The first day, I had a short nap (er, four hours) after my flight, and went to sleep around 1 a.m. I felt pretty invincible about jet lag – look at me, I’m already on a practically normal schedule.  I’ve got this!

Today was another story. Silly me, I forgot about the second day trap!

I woke up at 5 a.m. wide awake, and forced myself back to sleep until 9. At 9, waking up was almost impossible. Work went by so slowwwwly from 11-12, and I didn’t know how I was going to finish. By mid-afternoon, I suddenly felt great again….until I got home and fell asleep for  another four-hour nap. I set an alarm but just could not get out of bed. When I did, my head hurt sooo badly.

I felt like this at work today! Source: The Telegraph

So how can you avoid feeling like this? I’ve done some research, and here are the top ways to get over jet lag:

6a. Starve yourself for a day before you land. Supposedly this helps reset your internal clock. Ha.I have never tried this. My philosophy is why make flying any more of a miserable experience than it already is? Still, this guy says it works.

6b. Alternately…eat everything in sight! This is my mum’s remedy for feeling better after jet lag – just eating tons until you feel normal again. Instead of either extreme, I usually just opt for trying to eat small amounts of plain, healthy stuff.

Or just do this if it feels good. Source: Vogue Italia

5. Do a little bit of exercise. This helps 100%, especially because you probably just spent a while in an unnaturally cramped position. It helps stretch your body out again and stop aching so much. But don’t overdo it – I went to a yoga class after landing in California, and it was a little too challenging for my aching body, so my shoulders seriously hurt for a couple of days (they usually don’t).

4. Don’t nap. I don’t listen to this one either. My body loooooves to sleep, and it definitely fights back if it’s not allowed to. 9 hours of sleep is optimal for me, and I once slept in until 5:30…p.m. Skip the nap? No way, José (or as he’s known in Catalonia, Josep).

3. Try out natural remedies. I’ve tried two things. First,  the jet lag care kit I tried and loved was this one from Boiron, and it’s supposed to helped with muscle pain, sleeping issues, and drowsiness. It’s always helped me adjust faster (no, they didn’t pay me to write that).

The other thing I’ve dabbled in is melatonin. It will knock you out, so it’s great for sleeping on your flight. But when I’ve tried it the next day, I’ve slept for 14-15 hours (even for me, this is a lot). Maybe I used the wrong dosage, but I don’t recommend trying this one after you’ve landed unless you’re having major sleep issues.

2. Drink lots of water. Make sure to take advantage of the free water on airplanes. Drinking lots definitely helps you feel a little less weird. I’m always super thirsty for a few days after a flight.

1. Just give in and admit it’s going to be a rough few days. Be nice to your body and stop freaking out! Listen to your body, and don’t do anything crazy –  it’s already upset with you for doing something completely unnatural to it. Remember, jet lag is normal, even though it sucks. And if you have jet lag, it’s because you got to travel. Totally worth it!

Not convinced? Here’s some more info on jet lag: