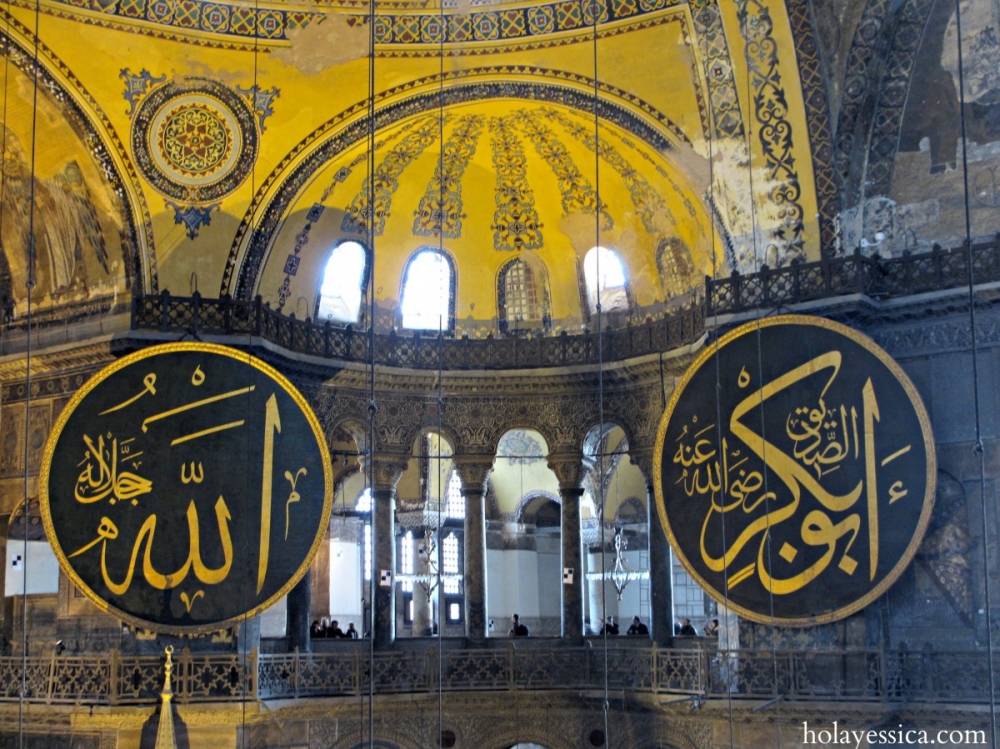 A few weeks ago, I spent a long weekend in beautiful Istanbul! I went with a group of friends and stayed with my old roommate, who’s actually from Turkey. Istanbul was so many different things that I was having a hard time making just one cohesive post about it. So to start, here are the best things about of my trip.

1) How old everything is

I guess I knew in theory that Istanbul is one of the oldest cities in the world, but it was still pretty mind-blowing in practice. As we stepped into the entryway of the Hagia Sophia, there was a sign telling us this was the ‘new’ version…from 537!

You could see the proper ‘old’ basilica about 12 feet below the street level in a pit. This one was inaugurated in 415.

I’m not a foodie by any stretch of the imagination, but I definitely enjoyed Istanbul’s culinary scene. Did you know that Turkey has something really similar to tapas? I didn’t, so I was pleasantly surprised! My favorite spot was a restaurant that served us salad and Turkish ‘tapas’, followed by fresh grilled fish, and fruit for dessert. Yum!

A normal (and delicious!) Turkish breakfast

Turkey and its people aren’t getting the best rep lately because of a few horrible incidents (like the bombing in Ankara and Sarai Sierra, the American tourist who was murdered). I’d also read about it being pretty sexist and dangerous for a single, obviously foreign girl.

But you know what? I experienced none of that. I was extremely nervous, but it was all unwarranted. The Turkish people I met were all very friendly, kind, and generous beyond belief. I felt so welcome, and they were all beyond happy to show me their country and city.

That isn’t to say you shouldn’t be careful when you travel, but don’t let scary headlines frighten you out of a trip.

Okay, I don’t do luxury travel, so the mere sight of the word ‘cruise’ would usually put me off – it sounds expensive, though admittedly lovely. So I was surprised when my friends suggested doing a cruise of the Bosphorus…and surprised again to discover that it was very cheap!

A view of a palace from the ship.

This was absolutely my favorite way to see the city. Istanbul is so big that I was having a hard time getting a grasp on it, but cruising the Bosphorus Strait was a way to see a lot of the beautiful sights from a more relaxed perspective.

5) Going with a local friend

Meeting up with a local is my favorite way to travel, and it was especially welcome in Istanbul. The city left me very overwhelmed and slightly anxious, so I was glad to have a guide. Plus, on top of that, the guide just so happened to be one of my best friends. Win win!

My very kind and friendly hosts!

Whether it was taking a cruise, eating at a restaurant with traditional dancing and music, or going to a rooftop bar with stunning views of the illuminated city, having a local friend help me around really let me see the best of Istanbul in a way I wouldn’t have done otherwise.

When my friend told me my dinner alone was going to cost fifty lira, I freaked out. FIFTY? That’s like… an entire travel weekend food budget for me!

Then I went to get cash out. Forty lira was around seventeen euros. Freak out over!

I probably spent around 130 lira in a four-day weekend, which includes food, drink, transportation, club entries, souvenirs, and tourist attraction entries. And I wasn’t trying to scrimp and save, either. (Had I tried to do the same amount of stuff in Barcelona, for example, it would have been easy to blow that amount of cash in one, maybe one and a half days!)

Okay, so that was the good stuff about Turkey….so look out for my next post where I talk about the not-good-stuff!

Have any of you been to Istanbul? What did you like about it?