The Magic of the Albayzin in Granada 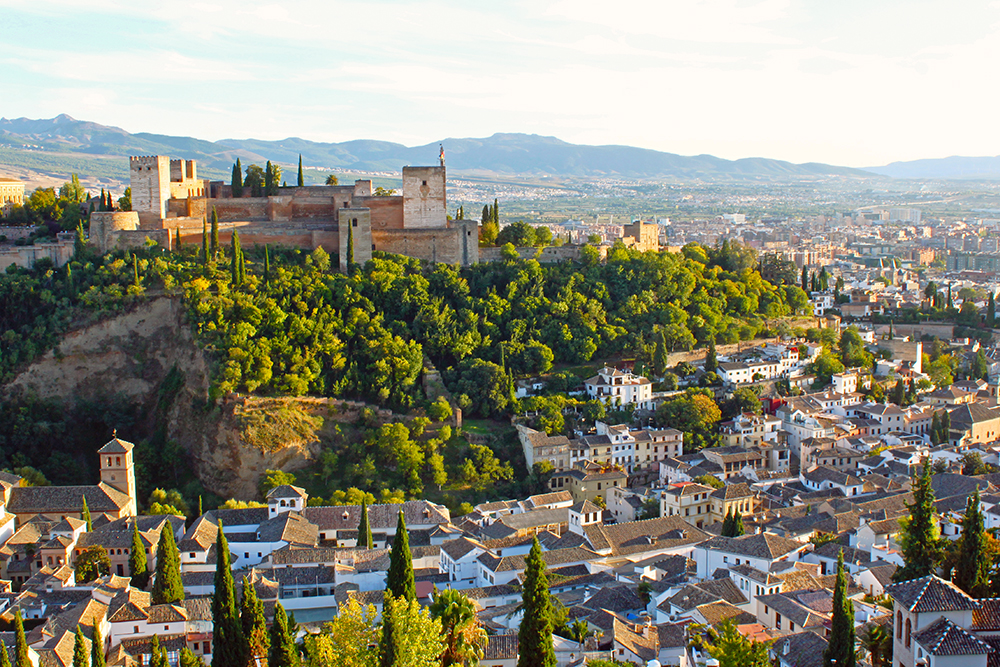 “It’s so beautiful it will move you to tears” – a phrase I’ve often read describing everything from over-hyped tourist destinations to an especially delectable selection of cheeses (do I even have to mention Buzzfeed here?).

Anyway, it’s one of those phrases that probably isn’t true in the slightest  99.9% of the time you see it, alongside other vomit-inducing turns of phrase like “jaw-droppingly beautiful.”

I like nice-looking stuff, from travel sights to cheeses, because I am what is known as a human being.

But pretty things just don’t move me to tears. Sad things, sure – but not the exquisitely pleasing. Isn’t it sort of ridiculous to be taken in simply because something is nice-looking?

That’s what I thought.

Except…then I saw something that finally made me understand why people talk about beautiful places moving you to tears.

The city of Granada managed to prove my thoughts about tears wrong big-time.

Granada is one of those cities that endless different cultures have wandered through over the centuries. Like lots of other places in Andalucía, the sunny swathe of land taking up most of southern Spain, it’s also still got a sense of those different cultures.

The easiest way to see this is in the buildings – Andalucian structures often look like every culture that’s come along has just stuck their own style on top of an older one.

Your eye might be caught by the towering cathedral spires high above the city, only to be confused as you move your gaze downwards and find something that looks more like a mosque.

And that’s because they pretty much did just stick a new bit on top of an existing building, from the Sevilla Cathedral (built on top of a mosque and modified over the centuries) to Cordoba’s Mosque-Cathedral (which features a cathedral jammed right into the middle of a mosque).

But Granada is a bit different.

Sections of the city still look very Moorish, whether it’s big things the sprawling Alhambra palace and fortress complex, or small details like the little channels for running water embedded into the stony streets.

Even the place names start changing as you drive on the freeway towards Granada from the west, changing from Spanish-sounding to names that have some Arabic influence. A giveaway  clue – they’ll start with “Al”.

But history aside – Granada is also one of the coolest places to be in Spain. It’s got a pretty sweet tapas deal going on (you get free tapas with a drink, often huge ones that could count as a meal), a giant student population, and generally just a great vibe all around. It’s frequently mentioned as one of the best places to travel, live or study in Spain.

Visitors tend to fall in love with Granada.

Still, lots of Spain has great vibes. It’s a country that loves to have a good time, and that’s not unique at all to Granada.

So why do people think Granada is extra-special? Is it just the combination of fascinating historical sights and a fantastic lifestyle?

Yes and no. Yes, that’s part of it – but we’re still missing something. Those two things on their own probably wouldn’t be enough to move you to tears.

The tears in question were provoked by a particular section of the city – the Albayzín neighborhood.

It’s a convoluted maze of tall white buildings and twisting cobblestoned streets that dates back to the 10th century. It climbs its way up the back of a hill, starting from the riverbeds of the Río Darro and ending at the St. Nicolás church at the top.

Back in the 10th century Granada belonged to the Moors, and the Albayzín still has a lot of Moorish architectural features. You can also find an entire street of tea rooms draped in colorful sheer fabrics. It’s pretty visually stunning.

It’s also one of the most magical places I’ve ever visited. Even the name sounds enchanting and mysterious, especially when whispered in Spanish.

The spell of the Albayzín starts to set in the very late afternoon, when the sun starts to slowly sink behind the Sierra Nevada mountains and the sky starts turning deeper shades of purple.

Around this time, you’ll see people come out into the streets and squares to meet up with friends. Maybe they’ll drink up a couple of chilly cervezas on an outdoor terrace. Be careful if you choose this option – the steep streets mean that you have to be very cautious not to tip you and your chair over and down the hillside.

Or even better, they may bring out a selection of instruments and have a laid-back jam session right there on the streets. The whole neighborhood fills up with bewitching strains of gentle Spanish guitar music pulling you inwards and upwards into the hills as the night sets in.

If you choose the right pathways through the Albayzín – a tricky task, as there are endless enticing streets you could walk down – a reward is waiting for you at the top. Making your way up the hill, you’ll occasionally get glimpses of the spectacular Alhambra palace through the tiny spaces between the packed-in buildings.

Eventually, you’ll find your to the plaza in front of the St. Nicolás church. The church is pretty, and the square is full of talented musicians playing beautiful music, but hardly anybody pays attention to either. That’s because directly across from the square on the opposite hillside sits the Alhambra, encircled by rings of towering mountain peaks and green hillsides.

“Sits” is the wrong word; what the Alhambra does is more impressive than simply existing. No, it’s  a golden palace that reigns over the white city lying at its feet. Nothing else in the whole city catches your eye and pulls it in quite like the Alhambra.

I don’t know quite how a building managed to completely captivate me. Still, there I was, sitting on the low stone wall of the square in front of the St. Nicolás church to get a front-row view of the Alhambra – and entirely drawn in by the scene in front of me.

The sky’s colorful sunset tones and the gentle Spanish guitar in the background only made the scene even more spectacular.  But even though I was sitting among crowds of people, they all faded into the background.

It was just me and this centuries-old palace, which was slowly changing tones and colors as the sun set.

For a few minutes, I was spellbound.

When I came back to my senses a little while later, night had fallen and the Alhambra was lit up. Now, it was a deep gold against the dark purple sky, and the mountains surrounding it were just giant black shadows.

And I realized I was on the point of tears from how overwhelmingly amazing, how purely magical the experience was.

As I’m writing this and thinking back on it, I feel similarly emotional. I can’t put into words exactly what it is about the Alhambra that’s so magical to me.

This was unquestionably beautiful, but not how I’d thought of things being beautiful.

It’s not the most beautiful sight I’ve ever seen  – actually, the outside of the building is fairly plain, and I’ve definitely seen more spectacularly colorful sunsets before. It wasn’t about some perfectly pleasing angles or some especially pretty details of the scene.

No, this was an entirely different kind of “beautiful”.  This wasn’t about the way the Alhambra looks. I still don’t know exactly what it was.

All I know is that sitting there, gazing over the Alhambra and Granada, it moved something deep inside me I didn’t even know existed. I experienced the closest thing to magic I’ve ever felt.

There’s just no logical reason for it. But then…isn’t the whole point of magic is that it takes you beyond the limits of logical sense?

Maybe magic does exist. Not in spells or potions or the stuff of fantasy novels – but instead, in something much more ordinary, and also much more beautiful, because it’s real.