What to Do in Barcelona: Font Màgic de Montjuïc 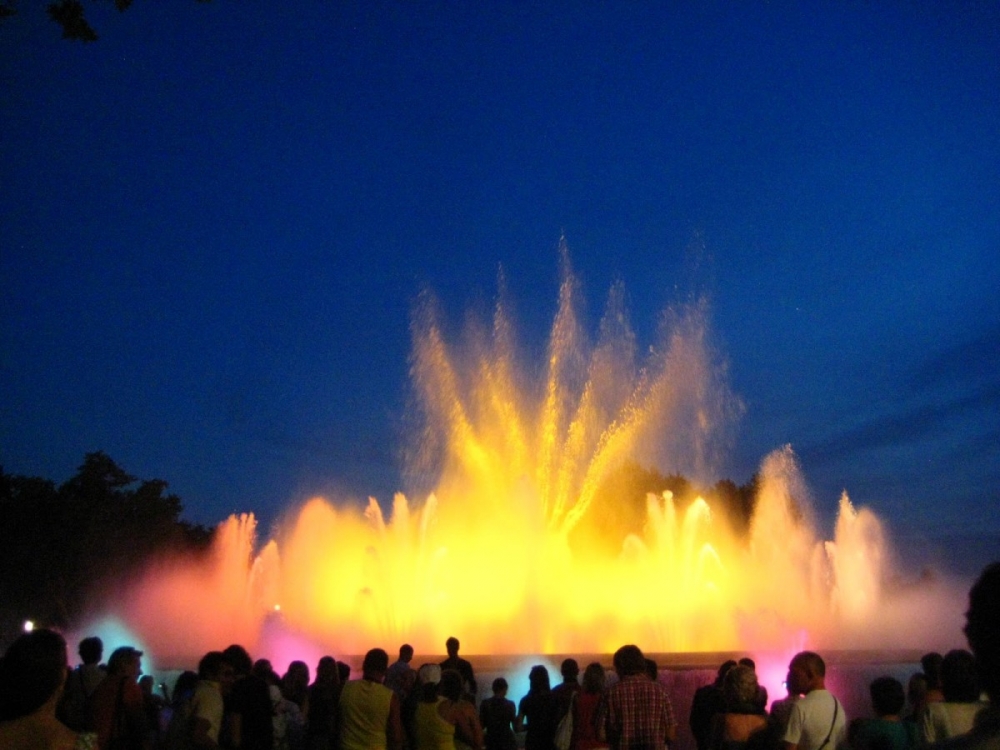 Montjuïc, the big hill right on the sea that overlooks Barcelona, is already a pretty fabulous place to go in the daytime – it’s packed full of museums and parks, and is home to an Olympic stadium, a castle, and a palace. Not to mention it has some incredible views of the city. And to top all that off, you can enjoy the views at night too.
Only instead of a clear view of Plaça de Espayna, you have to put up with a fountain show blocking your view. Too bad, right? Here’s what the Font Màgica de Montjuïc is all about.

Behind the fountain there are four columns, which come from the four stripes on the Catalan flag, representing the four communidades autonomas of Catalonia. They’re not the originals, which the dictator Primo de Rivera ordered to be destroyed because they were a symbol of being Catalan, rather than Spanish. The new columns were put up last year. Sadly, they don’t show up in the photo below as the magic fountain show is blocking the way.

This isn’t any normal fountain show. It’s an amazing show that includes lights, music, and water. There are multiple shows that all have different themes. Two of the most fun ones I’ve seen were the movie-themed one (guess the song playing!) and a special one for kids that included loads of sing-along songs. I’ve also seen ones with classical music themes from different time periods. It’s better than any fountain-related activity I’ve seen/done before, including the show at the Bellagio in Las Vegas.

This is a great thing to do in the summer when it’s still nice and warm outside in the evenings, and tons of people of all ages and nationalities go every night. If crowds aren’t your thing, wait until it’s a bit cooler to go. Lots of Spanish families go (the grandparents, parents, and kids), and some bring little picnics or snacks and drinks. Take your dinner in a tupper, grab a couple of beers, and go with friends! You may have to go up higher towards the palace to find a place to sit, but the views are best from there anyway.

So here’s some practical information:
How to get there: Take the metro L1 or L3 to Espanya. Get off and look for the palace, and walk towards it! (Those are probably the coolest directions I’ve ever written).

When to go: Here’s a site with the times of shows throughout the year.
What to take: Snacks, drinks, and friends
Where to eat afterwards: Jump on the metro green line and get off at Paral•lel to find lots of cheap, tasty tapas restaurants. (Or walk down Avenida Paral•lel for about fifteen minutes to do the same by foot).
Strange things to see: How late Spanish children are allowed to stay out!
Anything else? Be careful with your stuff – pickpockets like the Magic Fountain too.

Oh, and one more thing – the cost: ABSOLUTELY FREE!