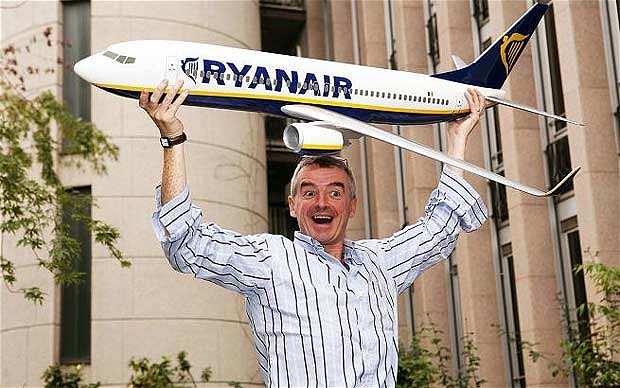 Pretty much everyone who’s spent any amount of time in Europe has experienced the wonder of Ryanair. If you don’t know much about Ryanair, I have a short personal anecdote that should tell you everything you need to know.

My family  and I were a Ryanair flight from Manchester to Dublin a few years ago. When the flight attendants gave the safety presentation, you could see that the safety jackets had “Aer Lingus” printed on and crossed out in permanent marker. “Ryanair” was scribbled on top of this. Cutting corners at every opportunity!

So in honor of the airline everybody loves to hate, here are my top five reasons why I hate Ryanair:

5. Mid-flight ads. No, I really do not want to buy a lottery ticket at 30,000 feet. No, I won’t want to in five minutes either. Or in twenty. I don’t want a €10 sandwich either. Stop playing those annoying announcements so I can sleep. (Other airlines have unfortunately adopted this genius idea).

4. They intentionally mislead you about the prices. The flights are advertised at 99p. Oh, but you’ll have to pay the taxes and ‘fees’. And then a ‘convenience fee’ for buying online (this also applies if you buy the ticket at the airport). Want to pay with credit or debit card? That’ll be €16 please! My last €17 flight ended up costing nearly €90 by the time I’d purchased it.

3. The airports aren’t where they say they are. There are three “Barcelona” airports…and two of them are over an hour away from the city.  So when you land nowhere near your actual destination, you can catch the official Ryanair bus to get to where you want to go. Of course, that’s not included in your ticket. Add €20 minimum to your ticket price for this lovely service.

2.  Their generally horrible approach to squeezing every last penny out of you. See #4 for a personal example. And remember that time they tried to charge for using the bathroom mid-flight? Then they tried to take the toilets out entirely. And THEN they tried to get rid of seats to have ‘standing airplanes’. Anything to cut costs!

1. Ohhh, I can’t pretend anymore – I don’t actually hate Ryanair . It’s impossible when their flights are so so so cheap, despite #5-2. I would love to be all high-minded and not support their terrible, disgusting business practices, but I just can’t when it’s so inexpensive. I’ll put up with a lot for some cheap travel.  And I secretly love the silly landing announcement they play. Sorry guys!

As much as I love-hate Ryanair, the alternatives are generally more expensive, and it does let you travel quite cheaply. But there are definitely lots of alternatives to Ryanair: Easy Jet, Wizz Air, Flybe, and Vueling are some decent ones. Vueling is my favorite.

Keep in mind that Ryanair isn’t always the cheapest airline to fly on – here’s a side-by-side comparison table that proves it. Don’t bother using Ryanair if you have any luggage you need to check, as the fees are ridiculous.Also read this article by the Independent: “Just how cheap are those no-frills flights once the hidden extras are taken on board?”

If you want to learn more about Ryanair, check out the documentary“Why Hate Ryanair” on YouTube. It does a pretty thorough job of objectively examining both sides of the Ryanair debate.

For something more fun, somebody actually made a whole website devoted to hating Ryanair (this post is especially hilarious).

Anyone else have any Ryanair stories? Everyone traveling in Europe seems to have one!