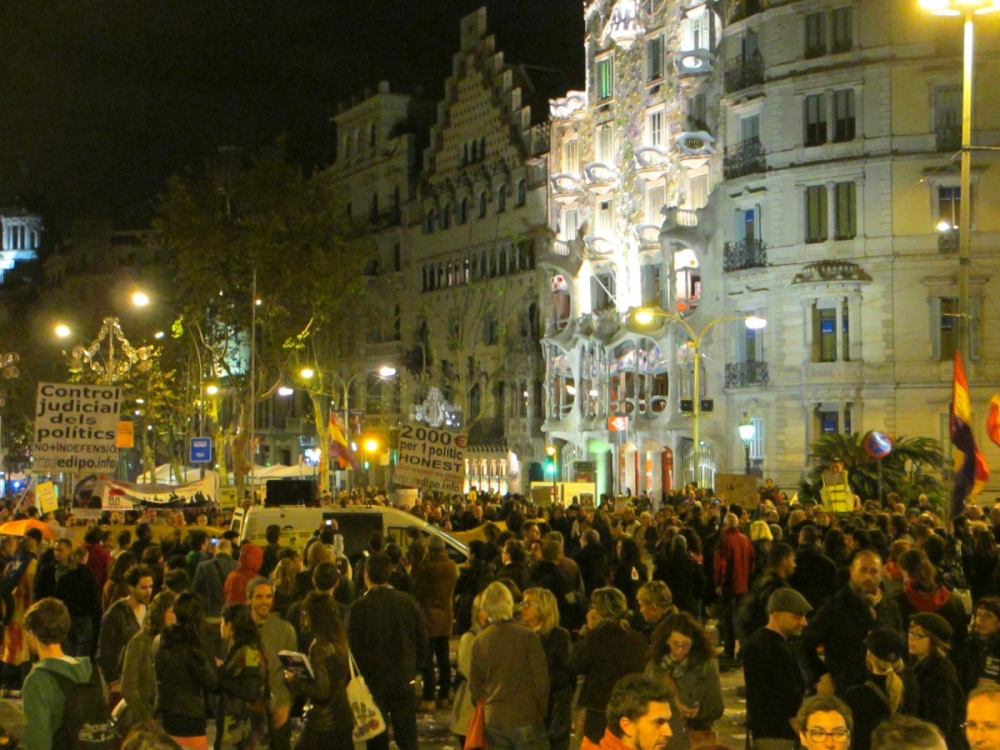 This Wednesday, Barcelona participated in the worldwide November 14 General Strike. It’s been about a year and a half since the indignados movement really took off here and there have been tons of Spanish protests in 2012, so what’s changed? Well, here’s what happened on Wednesday’s strike in Barcelona.

The whole city was eerily quiet in the morning, except for the throbbing of the police helicopters monitoring things. Busy Passeig de Gràcia was almost empty. There were no buses, no taxis, no newspaper stands, and only a few scattered workers and tourists wandering around. All the bars and restaurants, which normally have jam-packed terraces, had taken their tables inside and pulled down the metal grates. There weren’t even any trash cans, which the city took away after protestors set them on fire last time.

Usually, this is a busy café on Passeig de Gracia, one of the biggest streets in Barcelona.

Some of the shops displayed signs reading “Tanquem per vaga general” (we’re closed for the general strike). They’d shut down for a few different reasons, from supporting the strike to fear of getting their shops destroyed to realizing they weren’t going to make money anyway as the strike called for a shopping boycott.

“Vaga General #N14” and “Huelga General #N14” signs littered the pavement, and police in riot gear looked on.  There were marches and chanting, but for the most part, things stayed pretty calm (from what I saw, at least).

What are the Spanish strikes about? Here’s the official platform going around Barcelona as released by the CCOO, UGT, and USOC* (and translated from Catalan by me!):

This time, the strike was pretty different from the other ones I’ve seen. For one thing, I wasn’t afraid that my apartment was going to get burned down. It was also much more subdued. It seems like the movement is changing.

There was an official call for a non-violent protest after things got a little out of hand in the spring (some protestors destroyed, looted, and then burned down an entire Starbucks in the city center, for example), which accounts for the less intense protest. Also, some of the protestors are pretty intent on enjoying the chaos and just making a street party out of the whole thing. The movement seems to be splintering, and some of those splinter groups are growing increasingly extremist.

And finally, other people are just frustrated likely tired of trying the same techniques with little success. Add these things together, and there was a shift in tone for this protest as compared to the earlier ones.

Some of the pamphlets from this time around.

So what comes next for Catalunya? They’ve having special elections later this month and the movement for independence is getting stronger, and just about everyone is angry about the economic crisis. The Spanish government has finally decided they’ll halt evictions for 2 years due to the high rate of suicide because of them. It’ll be interesting to see how all of this develops.

Did anyone else see a Spanish protest in their city for the N14 protests? Any other Spain residents go to the protests on Wednesday? What were they like?