How to Make Catalan Galet Soup 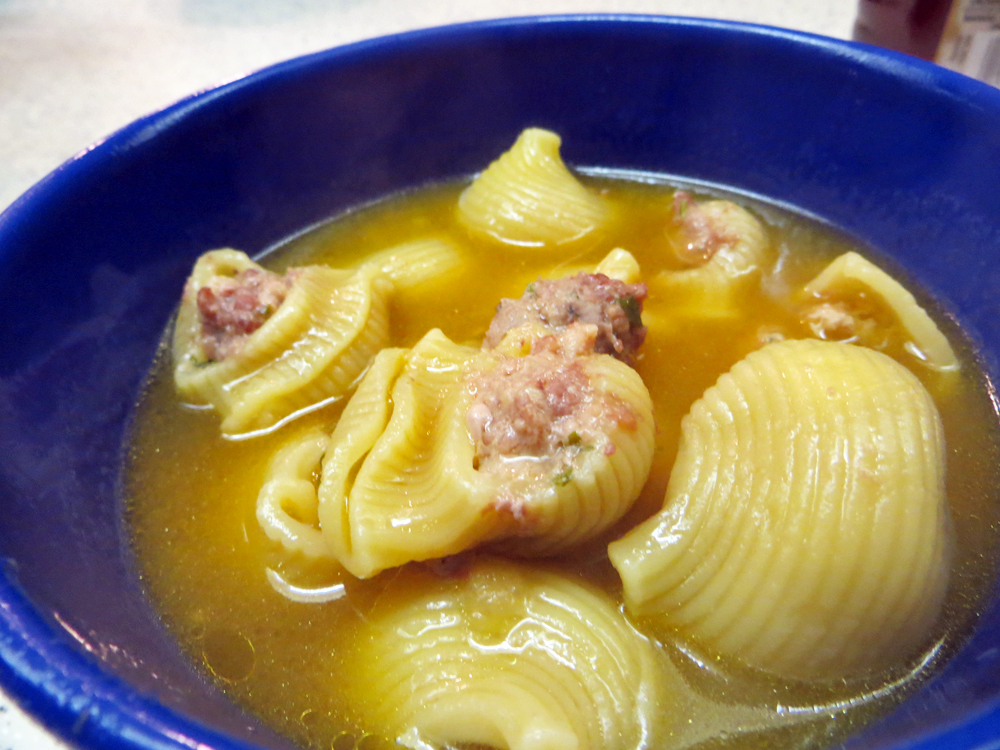 One of the most fun parts of coming home for the holidays from abroad is bringing with you a little taste of the new culture – whether that’s a figurative or literal taste. In this case, it’s a literal one! This Christmas, I landed in California with a suitcase packed full of turrón (Spanish nougat), sweet mazapán almond cookies, and galets, a kind of special pasta served in Catalonia during the holidays.

What are galets exactly?

They’re large shell-shaped pasta. You eat them in a soup around the holidays. You stuff the pasta shells with meatballs and serve them in a big bowl of broth. There’s also a second plate with meat, chickpeas, and vegetables that you boil up in the process.  It takes a long time to cook, so the house smells amazing while the ingredients bubble and boil.

You might see the soup on a menú del día in Catalonia around the holidays called “escudella de Nadal” (Christmas soup) or “sopa de galets” (galet soup). You’ll get veggies and not one, not two, but FOUR different kinds of meat in the most traditional versions of the soup. It’s similar to cocido madrileño, the Madrid stew. Even though it’s called a soup, which sounds light and healthy, this is some decidedly heavy eating.

In Barcelona, locals are so proud of their delicious galets that the city puts up giant versions of them as part of the holiday light displays:

The best part about galets (apart from them being giant pasta stuffed with meatballs) is that they’re the perfect dish to share with a big group of friends and family. The only bags I could find of them were half a kilo, so that’s a whole lot of soup you can make. That’s exactly what we did this year, and we found some friends to share it with. Even though 10 of us shared the galet soup, we still had lots left over!

Anyway, as I’m already sharing, I figured – why not share the recipe too?

I translated this one from the back of the packet of galets from my local supermarket. We made a couple changes, so I’ve mentioned those at the end. Our changes probably aren’t all that traditional, but the original recipe is AND both versions taste amazing.

This recipe is from the back of the packet of the Mercadona brand galets and is a little vague, but we managed to make it taste pretty delicious anyway. This is an easy recipe, but it does take a long time to cook.

So, without any further rambling from me, here’s the recipe for galet soup.

We used a slightly different mix of meats, which I’ll explain further on down.

Start getting the giant meatball (the ‘pilota‘) ready.

For the meatball, you’ll need 1 egg, breadcrumbs (the recipe just says ‘1 miga de pan’, so we just played it by ear), the ground pork and ground beef, and the garlic, parsley, and cinnamon.

Roll the meatball in breadcrumbs and add it to the boiling mixture when it only needs to boil for another 30 minutes. Throw in some cabbage and potatoes too.

Other recipes also include stuffing the galets with small meatballs  – this is what we did (more on that later). Back to the soup…

When you only have 10 minutes left on your timer, add the chickpeas and the butifarras. If you’ve added black butifarra, take it out after three minutes so it doesn’t fall apart in the soup.

When the time is up, strain the soup. You’ll need both the stock and the meat and veggies, so don’t throw anything away.

Serving suggestion: enjoy on a cold winter day with a large gathering of your favorite people. 🙂

So what did we change?

The first change is that we basically threw in whatever meat scraps and inexpensive meat they had at the meat counter. We couldn’t get quite the same ingredients, so we tried to go for the most similar items possible.

Secondly, this recipe only has the giant meatball (the ‘pilota‘), although we found recipes with both the pilota and smaller meatballs to stuff in the galets. We ended up choosing just the stuffed shells – more on that in the next change.

To make the meatballs for the stuffed shells, we used the same recipe as for the pilota meatball. Roll the mixture into small balls. Then, grab your galets and start stuffing them. The easiest way I figured out was to use the end of a small spoon to help push them in.

Then, we froze the galets for a couple of hours to make sure the meat stayed in place before adding them to the broth.

We also made another change – we didn’t end up cooking the second course part of it. We followed the recipe for the tasty broth with all the meat bones and veggies, and made the galets stuffed with the meatball recipe. That resulted in a really tasty soup, and some awesome and unusual (to us non-Catalans) pasta and meatballs.

But we had a hard time getting the specific meat (especially the butifarra sausages) that makes the second course delicious. So our meat course would have ended up being all leftover parts of animals that make broth taste amazing, but aren’t so nice to eat on their own.

You can see from the picture for the first step in the recipe that we had quite a few pieces of meat that are pretty unappetizing (and even more so after they’ve been boiled for hours – we took them out of the broth to examine them and decided we’d be perfectly happy not eating them).

I know if it’s your traditional dish, it’s probably sacrilege to hear of eating just one course of galets! Still, not being able to get the right meat meant modifying the recipe to fit what ingredients were available here. I’m not claiming at all that this is most authentic way to eat galets – it’s just what we made work with what we had based on the traditional recipes. And it was delicious.

The best part? This was one dinner that went over well with all our guests. Everyone finished up their bowls of soup and galets, and it was fun to bring home a little tiny piece of Barcelona’s culture to share with everyone back in California…along with some local Barcelona cava too!

Have you ever eaten galets? What’s your all-time favorite holiday dish?