My Travel Highlights of 2014 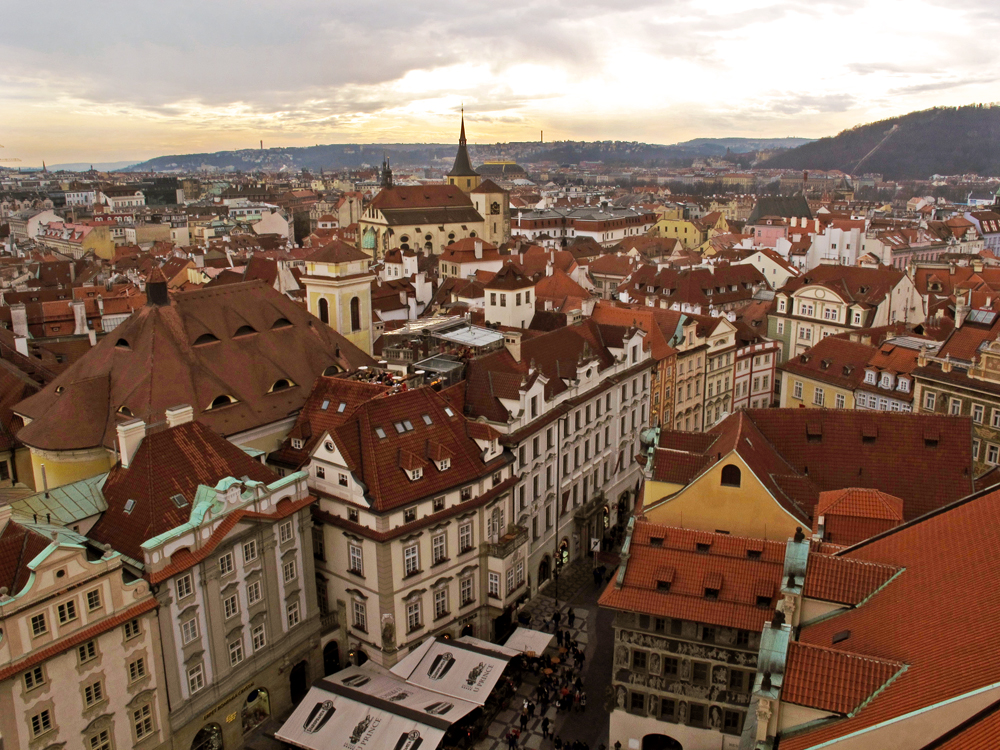 I really can’t believe that 2014 is over and that 2015 is already here. It feels like this past year flew by…and maybe that’s because I was doing so much actual flying myself! 2014 has been the year that I’ve traveled the most ever.

Almost every month brought a new trip and a new adventure. I’ve blogged about most of the trips, and I’ve already posted about how nice it was to finally have a good year. But I still want to look back at the highlights of a fantastic year of travel. 2014 was a mix of old favorites and new discoveries, and even getting new perspectives of places I thought I’d never, ever go back to. Travel is always a surprise!

Being Enchanted in Fairytale Prague

Everyone I know who’s been to Prague has raved about how it’s like something out of a fairytale – only real. I finally got to see the Czech city for myself in February, and I had to agree with all of them. The whole city is so pretty that it almost feels fake. It makes you want to reach out and knock on the buildings to make sure that they’re real, not secretly made of cardboard.  Seeing the city on a sunny but cold winter weekend meant we got to avoid major crowds (although there were still a bunch of other visitors).

Don’t miss the astrological clock, a walk up the tower of the Old Town Hall, and a visit to Frank Gehry’s twisting Dancing House.

Celebrating Spring with a Flower Festival

Every year, Girona, Spain has a festival to celebrate spring called the Temps de Flors – literally, the Time of Flowers. Girona is already gorgeous on its own; it’s an old city right on the river with a row of colorful hanging houses.

Add in a helping of the freshest spring flowers decorating the place, and you’ve got an obscenely beautiful way to spend the day. Some squares simply feature pretty displays, but most of them have done something seriously creative with the flowers. Take the high-speed train from Barcelona and you can be tiptoeing round the tulips yourself in about 40 minutes.

I’ve lived in Barcelona for three years, but I hadn’t yet tried the wonderful early springtime Catalan tradition – the calçotada. The name comes from the star dish, the calçots, which are a long onion similar to a leek.

You barbecue them until the outside gets black and charred. No, honestly! But first you have to pull off the blackened outside layers. Inside, the grilled onions are sweet and delicious. Since going to my first calçotada in February, I was hooked – I went to three in 2014!

Following the Trail of Harry Potter in the U.K.

Like a lot of people my age, I grew up with the Harry Potter series, so getting a chance to see some of the real-life places related to the series was awesome. We went to cafés where J.K. Rowling wrote the series (all in Edinburgh) and historical sites that had been used as filming locations in the movies (like Durham Cathedral).

I never intended to do a Harry Potter themed trip, but it just kept coming up somehow! Traveling by a theme was actually quite a fun way to do a trip, and I may try it again in the future.

Read more: On the Trail of Harry Potter in the U.K.

Being an Explorer for the Weekend in Oslo

I’ll admit it – I wasn’t that excited about going to visit Oslo, Norway. This was mostly because everyone had warned me that it was SO crazy expensive. And while yes, it is crazy expensive, there are lots of ways you can save money and make it an affordable trip. One of the best things you can do on a budget in Oslo is to visit the city’s excellent museums.

Oslo’s appropriately nicknamed Museum Island is jam-packed with fantastic museums and galleries. I spent a lovely day going around the ones dedicated to explorers and adventurers – the Viking Ship Museum, the Polarship Fram (the Arctic explorers museum), and the Kon-Tiki Museum. All of them had incredible stories about people who had really taken exploration and travel to a completely new level. In other words, it was very cool stuff! (I’ll have a longer post about this in the future because it was so much fun).

Read more: How to do Oslo on a Tight Budget

Getting to Know Madrid Better

You know how some cities you can keep going back to, only to discover a new side every time? That’s what happens to me in Madrid. This year, I got to spend almost a week in the Spanish capital, and even though I’d already visited three times before, it felt completely new.

From watching a spectacular sunset at the Temple de Debod (an Egyptian temple in the middle of the city) to wandering around the charming Literary Quarter, I came away completely besotted with Madrid. And I still need to go back to visit its museums!

I have to confess to some ignorance here – I thought the Tour de France happened in, well, France. I had no idea that it makes stops by other countries sometimes (that seems like cheating). This year, it started off in Yorkshire, England, which I found out completely by accident…when I ran into the race.

OK, that’s a bit of an exaggeration. We were there just before the Grand Départ and kept seeing yellow bunting, bikes, and decorations. The penny finally dropped when we saw road signs for the Tour de France. It was fantastic seeing the whole of Yorkshire celebrate and really get into the spirit of the Tour, even though I’m not much a cycling fan myself.

Sampling Some of The Best Food in Europe

This year, I got to eat some very, VERY tasty food! From trying modern Mediterranean cuisine in a rooftop bar in Berlin, to going on a wonderful nighttime tapas tour of Madrid, to learning all about new Nordic cuisine in Helsinki, I packed in some delicious meals in 2014.

I also got to try my hand at making my own giant paella in Barcelona, go wine tasting in a 10th-century castle, and enjoy some of the best food around Spain. Ñam ñam indeed!

Read more: Eating My Way Through Madrid and Who Knew You Could Go Wine Tasting in a Castle?

I’ve been lucky enough to visit my sunny home state of California twice this year. It’s not called the Golden State for nothing – it’s pretty much summer all year round here. While a lot of people know about California’s famous weather and beaches, there’s one thing that might be a surprise. It even surprised me a lot this year, and that’s the California food.

From L.A.’s classic Grand Central Market to Orange County’s new Packing House in Anaheim and glamorous ocean side lunches in La Jolla, there’s a ton of good eating to be done here. More on this to come soon!

Barcelona and Gaudí are pretty much synonymous, but there is much more to my favorite city’s architecture than just old Antoni! This year, the Hospital de Sant Pau opened up its doors to the public again after a few years, and I liked it so much I visited twice. It’s the biggest Art Nouveau site in the world, and every inch of it is both beautiful and functional.

And yes, I did visit a Gaudí site too – the stunning rooftop terrace of La Pedrera, with its twisting chimneys is one of my favorite spots in Barcelona.

Read more: Who Thought Visiting a Hospital Could Be This Fun?

Not only did I get to see one of my favorite people in the world, but I also got to see a side of Edinburgh that I wouldn’t have seen otherwise, including the beautiful botanical gardens and some dangerously fun pubs. I can’t wait to go back!

Read more: The Journey That Almost Made Me Reconsider Road Trips

I’ve had a string of bad luck in Sevilla, and so it’s no surprise that the Andalusian capital wasn’t exactly my favorite. But it seems like my bad luck with the city may have just run out; this October, I had a great time in Sevilla.

That was probably my biggest travel surprise of the entire year. Sevilla’s a place I thought I’d never go back to, but I was very glad I did – I got a completely new perspective on the city. It really was a case of third time’s the charm!

Read more: The 5 Best Things to do in Sevilla, Spain

Berlin was another city I thought I’d never go to again. I visited for two days last year, and I have to say, I just didn’t get it. Lots of people completely love it, but I wasn’t too impressed. Luckily, this year the city completely blew me away.

So why hadn’t I liked it the first time around? Well, it’s such a huge place that it’s hard to really get an impression of it in just a handful of days. But once you spend a little more time in Berlin, you really get to see what a fascinating place it is. It’s now become one of my favorite cities I’ve ever visited!

I was expecting Helsinki to be very similar to Oslo, although I actually ended up liking it more than the Norwegian city. Why? Well, first of all, it was significantly cheaper. Also, it was full of surprises, like the delicious and innovative food, finding out that saunas really aren’t as intimidating as you’d think, and some very chic architecture.

Oh, and the Fazer chocolates were a pretty delicious surprise too!

Read more: Expectations vs. Reality: A Surprising Trip to Helsinki

Feeling the Magic in Granada

Visiting Granada, Spain is the closest thing to real life magic that I’ve experienced. The hilly Albaícin neighborhood is spellbinding in the late afternoon and early evening, with the gentle strains of Spanish guitar you can occasionally hear only adding to the charm.

Hike up shortly before sunset to get the full impact of Granada’s transformation from day to night – it’s amazing. I felt something very special as I watched the sprawling Alhambra palace change in color from pale gold to rich copper while the sun gently fell behind the lavender Sierra Nevada mountains.

Read more: The Magic of the Albayzin in Granada

2014 was a pretty fantastic year, and it was a marked improvement over 2012 and 2013. Here’s hoping that 2015 keeps heading in the same upward direction! Thank you for following along my blog through 2014, and I hope you stick around this year too. Happy New Year, everyone!