2 Amazing California Markets You Have to Eat At 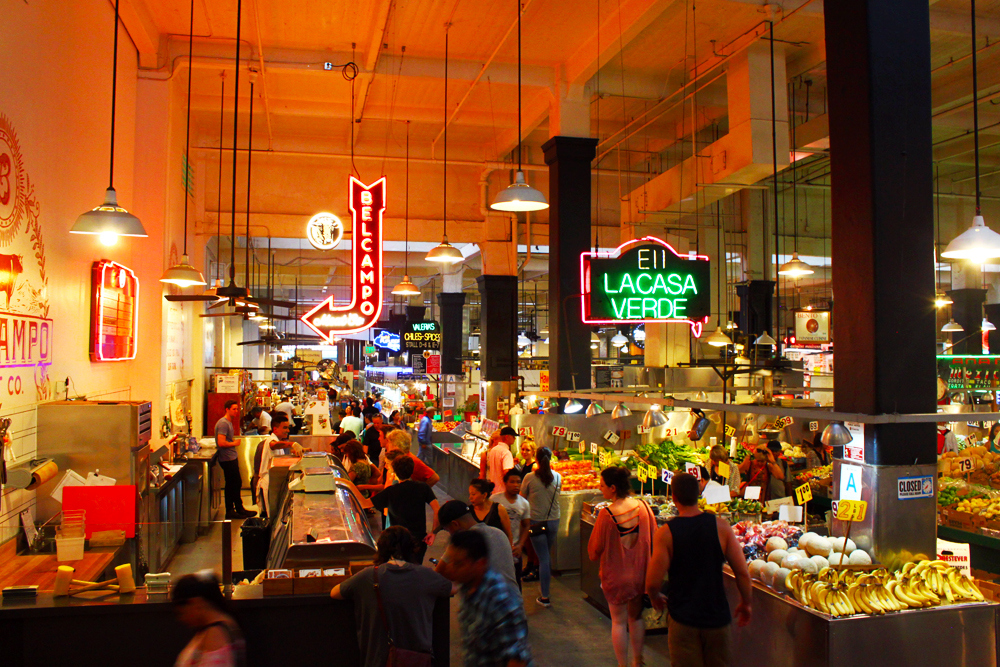 The thing that I love about California food is how everybody brings together dishes from their own cultures, and then it gets a very local twist with fresh veggies and produce. Sometimes things will get blended together in a really cool fusion dish – like the delicious ‘cholo fried rice’ I ate at The Must in downtown L.A. (it’s basically carnitas taco fillings mixed into rice – and incredible).

Sigh. Who doesn’t want to be in California?

That sort of stuff is what I think makes California cuisine special. It’s not any one thing in particular, but it’s a mishmash celebrating the diversity of the state.

(Then, of course, you get all the crazy celebrity diet trends too, but that’s a whole different story).

On my recent couple of trips home, I took some time to explore some of the Golden State’s markets and food scene. The Boqueria they are not – that’s Barcelona’s famous market – and this is something that I just can’t see happening here in BCN…at least not for a very long time. There’s nothing here that quite compares to the awesome mix of cultures and cuisines that’s on display in these two California markets.

Grand Central Market is a classic stop on a tour of downtown Los Angeles. This market is bursting with bright neon signs and equally colorful vegetables, spices, and characters. It’s been an L.A. staple for years, dating back to 1917 (so not very old at all by European standards, but quite old by West Coast ones!). It’s always been a center for blending all kinds of food from different cultures, and that tradition is still going strong today.

The large structure is filled with a mixture of stands selling all sorts of ingredients and tiny restaurants serving up piping-hot street food.

As you make your way among the packed-in stalls, interesting and enticing smells occasionally waft your way from the mini restaurants. And I say ‘interesting’ because a lot of the time, you might be smelling something that’s completely new to you. It smells good, for sure, but you may not have any idea what it is that you’re smelling.

They’ve got all kinds of products from all over Latin America, delicate French pastries, a traditional Jewish deli, Thai comfort food, fresh-pressed juice (for your Hollywood juice cleanse!), Texas-style barbecue, currywurst from Berlin, and so, so much more.

The cool thing about this market is that you can buy both the great smelling street food and the ingredients you’d need to make it yourself at home. They sell spices here that you’d definitely not come across at your local supermarket (not that I’m much of an expert on home cooking myself!).

Delicate desserts to go from the French patisserie.

While Grand Central Market blends together a traditional market with more modern street food stalls, The Packing House is all about the street food. Housed in an old orange packing house (hence the name), you can find all kinds of delicious treats to eat here, fancy twists on grilled cheese  and other American comfort foods to traditional East Asian hot-pot to Indian curries…the list goes on and on.

I rather felt like going on and on myself and trying more of the places, but there is a limit to how much you can humanly eat in one sitting!

Some of the places are just too trendy – like the restaurant we tried that had sandwiches on waffles instead of bread and gave you tater tots instead of fries. But most of them are really, really tasty.

It’s worth taking a good long look around before you decide what you’re going to eat, although not just for getting a look at what’s out there to munch on. It’s because there are lots of interesting displays and information about the history of the Packing House when it was just a packing house, no capitalization necessary. The place also has live music and performances, which you might catch if you get lucky.

There’s only one downside to the Packing House, which is that the lines can get a little crazy on weekends for some of the more popular places.

But let’s not end on a negative – I have a little insider secret for you. Go and sit on the back outside patio and you’ll get a pretty good view of the Disneyland fireworks. And actually, because I’ve eaten outside both times I’ve been there, I didn’t take any pictures of the food! (Oops).

Apart from being cool new takes on traditional markets, Grand Central Market at the Packing House share one other thing – they’re hot spots for some incredibly tasty food, mixing together all kinds of culinary traditions from around the world. It’s a very cool way for California’s multicultural population to come together and celebrate differences over common ground – delicious food.

Because, let’s face it, who doesn’t like to eat tasty food in good company?

What’s the coolest market you’ve ever been to? Tell me about it in the comments!