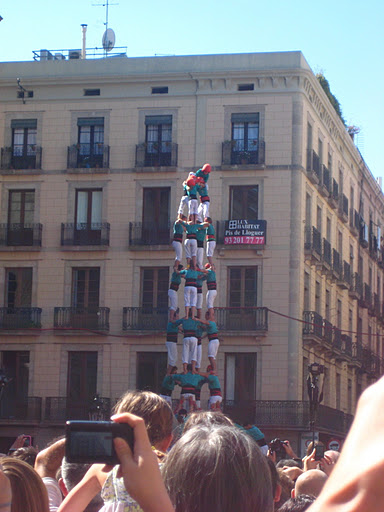 La Mercè is a festival that takes place in late September all over Catalonia. It’s a pretty big event, and there’s tons of stuff to do. There are loads of free concerts, ranging from local orchestras to popular bands.

This year’s biggest pop concert was held in the Estrella beer factory and the headliner was Mando Diao. Other things to do include watch the castellers, go to wine-tastings, watch a parade of paper giants, see the fireworks/fountain spectacular at Montjuïc, and see a correfoc.

I wish I’d taken better advantage of it, but I was too exhausted from my insane work schedule/terrible job to go to many of the events. Oh well, there’s always next year! But the things I did make it to this year were really cool, and it was fun to see some of the Catalan traditions as they’re done today. Actually, I’ve been doing pretty well regarding Catalan traditions this week! Last night I went to a city-wide tapas competition – you go around to different bars who offer their signature tapa and a little beer for €2.40. Then you get a stamp on your voting ballot, and at the end of the night choose the best one. So much fun, and so cheap! Tonight I’m going to an F.C. Barcelona match, and tomorrow I’m going to a cava factory and Monserrat. Yay for Catalonia!

What to see at La Mercè:

One thing I made it to that I’ve been wanting to see for a while was the castellers (the castlers). This is a Catalan tradition of making human towers. It’s seriously amazing to see! They start with a base of strong guys, and build up, the people getting smaller and smaller as they go up. The people at the very top are actually kids! These towers are realllllly tall, so they wear helmets, but I’m pretty sure that’s not enough to really protect them if they fall. Also, Wikipedia kindly informed me that castell-ing is a “Masterpiece of the Oral and Intangible Heritage of Humanity” (fancy!).

I was lucky to go this year, as the castellers broke a record for the tallest tower of a certain formation. Most of the time, one person stands on the shoulders of two people, but this time, it was one to one. Imagine being the bottom person – you would have a stack of five or six people on your shoulders! It’s a crazy but incredible tradition, and I mayyyy have a go if I stick around here long enough!

The Correfoc, the Firework-Fountain Show, and the Giant Parade
Ok, skip this one if you don’t like lots of people, fire, fireworks, scary costumes or loud noises. However, I love all of these things, so I love the correfoc! The word literally means “fire run”, and people dressed as devils and demons parade through the streets with torches and fireworks! I didn’t see the one at La Mercè, but I did see the one at the Festa Major de Gràcia. It’s fun to sit in a square and hear the bangs and happy shrieks of people coming close and then winding away again. Occaisionally you’ll see a giant raucous parade of sparklers, torches, and demons coming your way. I have yet to do the running with it part, but again – next time!The other firework-related activity to go do is the spectacular finale at Montjuïc, which involves a light, water, and fire show. This one gets pretty crowded, but looks amazing! I didn’t make it to this one either, unfortunately! I did, however, catch a glimpse of the parade of papier-mache giants that they do. I’m not sure what the Spanish deal is with giant paper dolls, but they do seem to have an awful lot of them. They’re good to see, and must take a lot of work to do.

The Concerts and Markets

There are stages all over the city, and there’s tons of great music to see. Just make sure to get there early! The festival features all kinds of music, so I’m pretty sure the phrase “something for everyone” is actually true here. There are also lots of great local markets to check out, and I had a great time just wandering around and seeing what I came across. Every corner and square has something really cool to discover during these festivals.

Ok, so here’s some practical information about the festival:

Where: All over the city! There’s a lot of stuff in the Gothic Quarter.
When: Late September, all day and night
How to get there: Use the Metro, and start at the Cathedral
What to bring: Strong elbows, for pushing your way through the crowds to get a view!
How much does it cost: Again, it’s FREE!
I’m hoping next year I’ll make it to all the fabulous events that the festival has to offer. I was really bummed to miss so much of it, but thank goodness my work situation has changed, so I hopefully won’t be missing future fun events!