Wait, That Building Is On Fire! 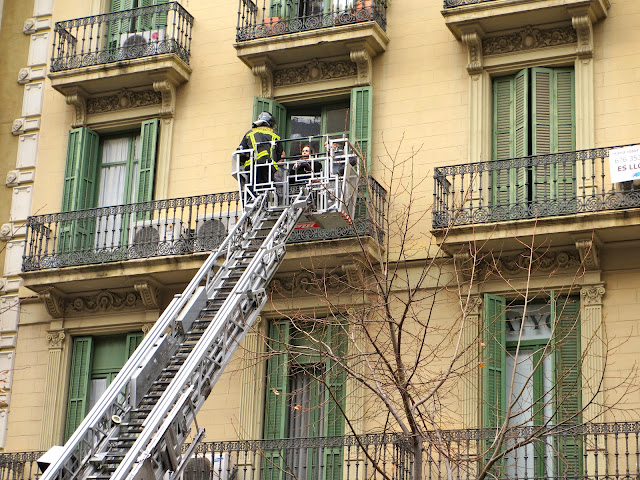 The other day I was biking home from work and I decided to go down one of the prettiest streets in the city, Rambla de Cataluyna, so I could snap some pics. I was cruising down the street deciding which buildings to shoot when suddenly I realized one of the buildings was actually on fire.

I didn’t realize when I took this, but all those people standing around behind the white umbrella are staring at the fire. The firetruck is on the left.

There was tons of smoke billowing out of the top and tons of people were standing around staring. Maybe you’ve heard that about the Spanish – they tend to stare. I actually think the real reason for this is that they don’t pretend to be feeling things they aren’t. So if they’re interested in something, they stare rather than pretend to be looking at something else.

I decided to get off my bike and join in the fun. All the building’s residents who were unlucky enough to be inside at lunchtime went outside on the balconies. For some reason, they didn’t look too concerned – maybe they couldn’t see the giant black cloud coming from the roof! They were chatting on their cell phones and smoking lots.

Firetrucks, police cars, and ambulances showed up, and so did wayyy more people. The tourists in the hotel next door even went out onto their balconies to take photos of the exciting event. I snapped a few sneaky photos, but I was too shy to take one of all the drama at once

Eventually the firemen managed to get their hoses all organized and started with the giant ladder attached to the firetruck with a kind of person basket on the end. They made it all the way up to the second floor, where they talked to the residents, tried to get them to jump into the basket, and failed. I really didn’t understand – the building was on fire and these people weren’t having it.

No, gracias, we’ll just stay in the burning building.

Then when the serious police showed up with their sirens on, I decided to make a quick exit. It was one of the weirdest things I’ve seen here because nobody seemed to be panicking in the middle of a huge fire! But it must have turned out okay because when I biked past the same building a few days later it looked totally fine.

Currently reading: I just devoured The Hunger Games in one day (terrible pun totally intended).
Currently listening: “I Wanna Go” by Britney Spears, because it’s been on at every club I’ve been to pretty much since I got here, and I JUST found out it’s by her this week! Plus it has a totally bizarre video.