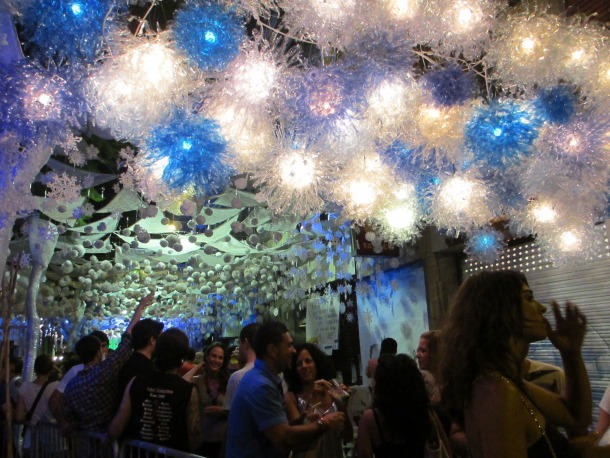 This past week, Barcelona held one of my very favorite events in the city – the Festa Major de Gràcia! For one week in August, the neighborhood of Gràcia gets turned into a 24-hour party-happy fantasyland.

Around the clock, there are concerts, neighborhood meals, contests, games, and performances. The whole neighborhood pulls together to put on a fabulous party.

Each participating street picks a theme and hand makes decorations. Here are the top five streets of this year’s festival, as voted for in a public contest.

This one was a lot of fun, though not an especially original idea. The characters were all life-size statues and were amazingly well done.

Plus, it was fun to see the Stormtroopers playing DJ at night.

This pretty plaza was taken over by the big top! There were lions, elephants, jugglers, acrobats, clowns, and more.

This was also home to some of the biggest concert stages during the evening and the castellers (though I missed them this year!), so it was packed for the whole festival.

The third place street was a little weird – you walked under giant dancers’ skirts and the street was decorated with musical objects.

This wasn’t my favorite street, and I don’t get why it got third place. Still, it was a creative idea and the result was pretty cool.

This street gets major points for originality. The street goes off the Plaça de la Vila de Gràcia, and it kept in line with the circus theme.

But this was more like a freak show type circus, from the giant bearded lady to the mysterious oracle to these guys getting shot out of cannons.

This was by far the most elaborate street, and they let you know right from the start.  At the entrance, you walked through a 20-foot wooden fence decorated with saloon-themed signs, giant eagles, clouds, cactuses, and more.

Once you got inside the “saloon”, there were velvet drapes and bronze chandeliers hanging from the ceiling. The stage was decorated with Americana-style banners (with a notice reminding guests “Don’t shoot at the pianist”), and they sold American food (hot dogs, nachos, and chili con carne).

There were also fun details, like the Western objects on the walls and the “Es busca” posters (Wanted in Catalan). They even managed to get some dancing mechanical legs on the walls in long petticoats!

Their feet were made out of forks! So creative.

And when you walked out the other end, you went through a series of Native American tepees, complete with more eagles and clouds. But these clouds had a special surprise – they “rained” water as you walked under them!

The Festa Major de Gràcia is definitely one of my favorite things that goes on in Barcelona, and this year was no exception. So if you’re ever in BCN around the 15th of August, you have to check out this amazing street festival!

Bonus: here’s what went on at last year’s party. Enjoy!