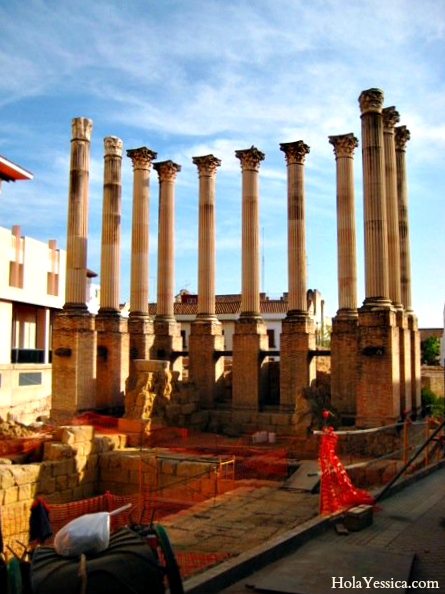 One of the first big surprises I got when I initially came to Spain to study abroad was in Córdoba. We were walking around, having a tour of the pretty little city, when bam! This appeared around the corner:

It’s the ruins of a Roman temple.

I guess I shouldn’t have been too shocked; after all, Spain and Italy are so close to each other, so it makes sense that the Romans left their mark all over southern Spain. But what was really odd was the guide’s attitude. “Oh yeah, those are just some old ruins from the Romans they found on accident in the ’50s,” he explained nonchalantly. “They found more when they built the town hall, so they left part of the Roman wall in the ayuntamiento building.”

It was so weird to me that something as exciting as Roman ruins were just shrugged off. The oldest buildings in my city in California probably only go back a little over a hundred years. In the unlikely event that something dating back to 1st or 2nd century is dug up in my hometown, I’m pretty sure there won’t be much unimpressed shrugging going on!

And to finish, something I haven’t done in a while:

Currently reading: I’m a Stranger Here Myself by Bill Bryson